‘Now I know why they shoot them’: Texas fisherman lands 8-foot halibut near Kodiak Island 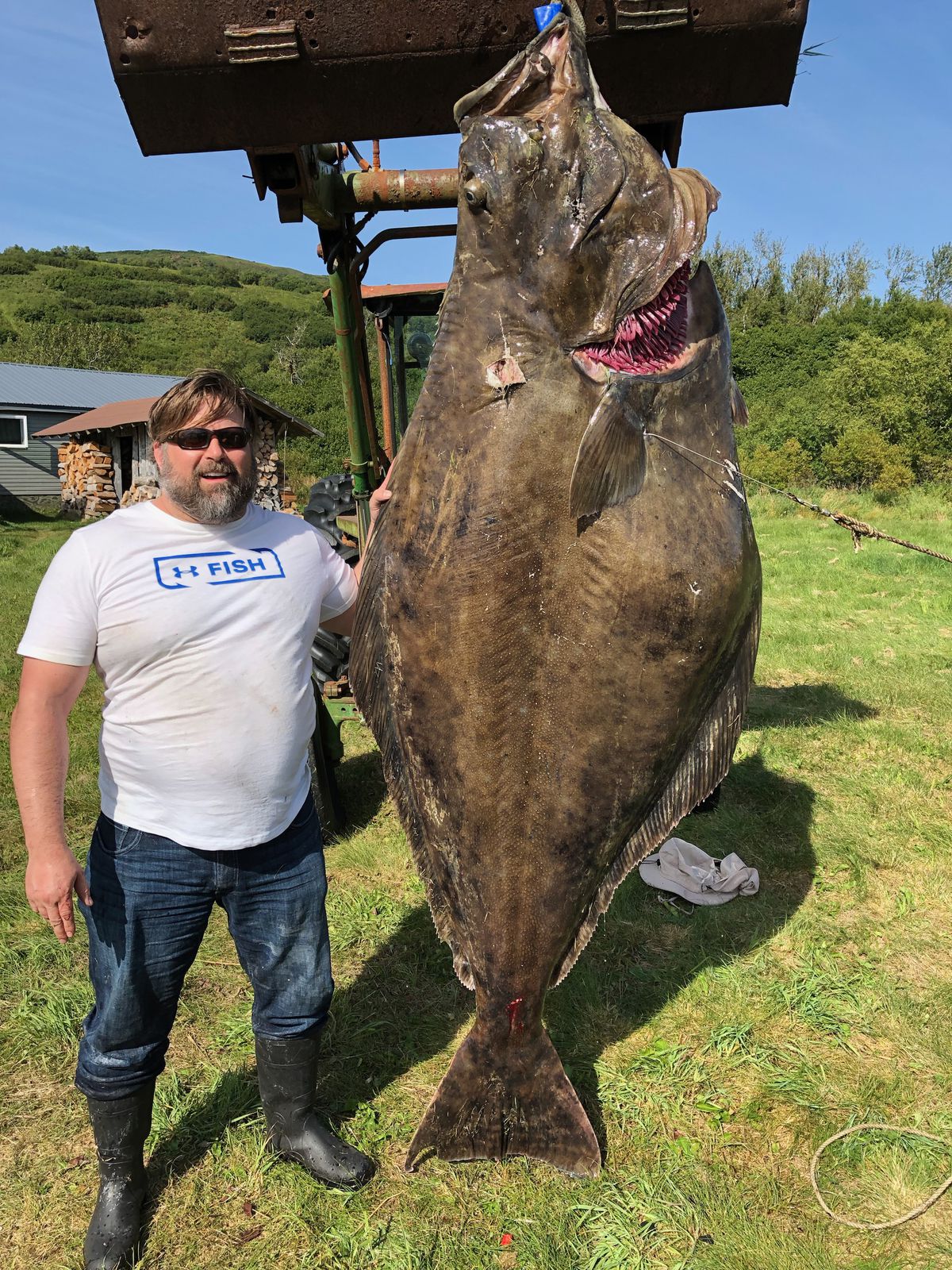 Damon Nelson stands next to the 96-inch halibut he caught on Saturday, August 17, 2019, in Ugak Bay. (Photo by Brian Barnes)

Damon Nelson stands next to the 96-inch halibut he caught on Saturday, August 17, 2019, in Ugak Bay. (Photo by Brian Barnes)

A halibut believed to weigh nearly 500 pounds needed three shotgun blasts, two harpoon strikes and a screwdriver before it could be landed a week ago off Kodiak Island.

The fish, estimated to weigh 499.1 pounds based on its 96-inch length, was caught by a Texas fisherman last Saturday in Ugak Bay.

“If it hadn’t been for the squid and the fish it coughed up, it would’ve been 500 pounds,” joked Brian Barnes of Rapid City, South Dakota, who was part of the fishing party.

Damon Nelson of Houston, Texas, hooked the monster while fishing with master guide Brian Peterson of Ugak Bay Lodge. Its girth measured 84 inches and it was 18 inches thick when laid on the ground, Peterson said.

“It was a giant beast of a fish,” Barnes said.

How big was it?

It was so big, the circle hook used by Nelson was stretched into a loose semicircle. “It didn’t completely straighten out, but it stretched it out,” Peterson said. “I was very surprised. It was amazing.”

It was so big, it took a tractor to lift it into the air so everyone could stand next to it for photos.

It was so big that in one of those photos, James Nelson is sitting on son Damon’s shoulders and they still come up short of the 8-foot-tall fish.

It was so big, the fillets were 6 feet long “and very thick,” Peterson said.

It was so big, part of the railing on the 40-foot boat had to be removed in order to get the fish into the boat — hence the screwdriver.

“It was an absolute nightmare when we figured out how large it was,” Nelson said. “… Eventually after some MacGyvering we were able to get it into the boat.”

Yet as big as it was, it’s not a world record.

The world record is the 469-pound flatfish caught by Jack Tragis of Fairbanks in 1996 near Dutch Harbor.

Nelson’s catch isn’t a record for several reasons, first and foremost because the fish wasn’t weighed — the lodge doesn’t have a scale big enough.

Beyond that, the fishing party broke several rules established by the International Game Fish Association, the organization that keeps the world record book.

“But we don’t fish for world records. We fish for fun.”

[One fish, two fish, what the hell is this blue fish?]

Nelson, a 42-year-old physician, was among six men fishing with Peterson and deckhand Tim Vining on Aug. 17.

It was the group’s fourth day of a five-day stay at Ugak Bay Lodge, and until Nelson hooked his monster, the fishing had been disappointing. A few rockfish and a salmon, but nothing else until Saturday.

That morning, the group caught two halibut in the 40-pound range. Midway through the afternoon, Nelson — the least experienced angler on the boat — hooked the big one.

He was fishing with 80-pound test line in 155 feet of water on herring and sculpin tail doctored with a “secret sauce” concocted that day by Barnes.

“I was kind of in the middle of the boat working on bringing it in while the captain and my friends were at the railing,” Nelson said. “My dad took video as it came to the surface and his first words were, ‘Oh my God!’

“It was a mix of fear and elation. I couldn’t tell what it was — is it a halibut or is it a great white shark?”

A partial video shows the fish diving under water at least twice after being shot and gaffed.

Peterson said the halibut was caught about 100 yards from the spot where a halibut estimated to weight 450 pounds was caught by Mark and Faye Manning in 1996. That fish was 93 inches long with a 70-inch girth, he said.

“I’ve been extremely fortunate,” said Peterson, 58, who came to Alaska from Minnesota in 1980 and has been guiding ever since. He’s been a hunting guide at Ugak Bay since 1985 and a fishing guide since 2002, he said.

Nelson was on his second fishing trip to Alaska. He and his dad, a retired miner from South Dakota, went to Homer a few years ago and caught a couple of halibut, none bigger than 20 pounds.

“I’m a fairly novice fisherman,” Nelson said. “I was the least experienced of anybody on the boat, so I had both the most shock and the least appreciation of the magnitude and size of that thing.

“… Honestly, I had no idea till this trip that fish occasionally had to be shot to get them into the boat. I thought, ‘Really? You have to shoot them?’ Now I know why.”