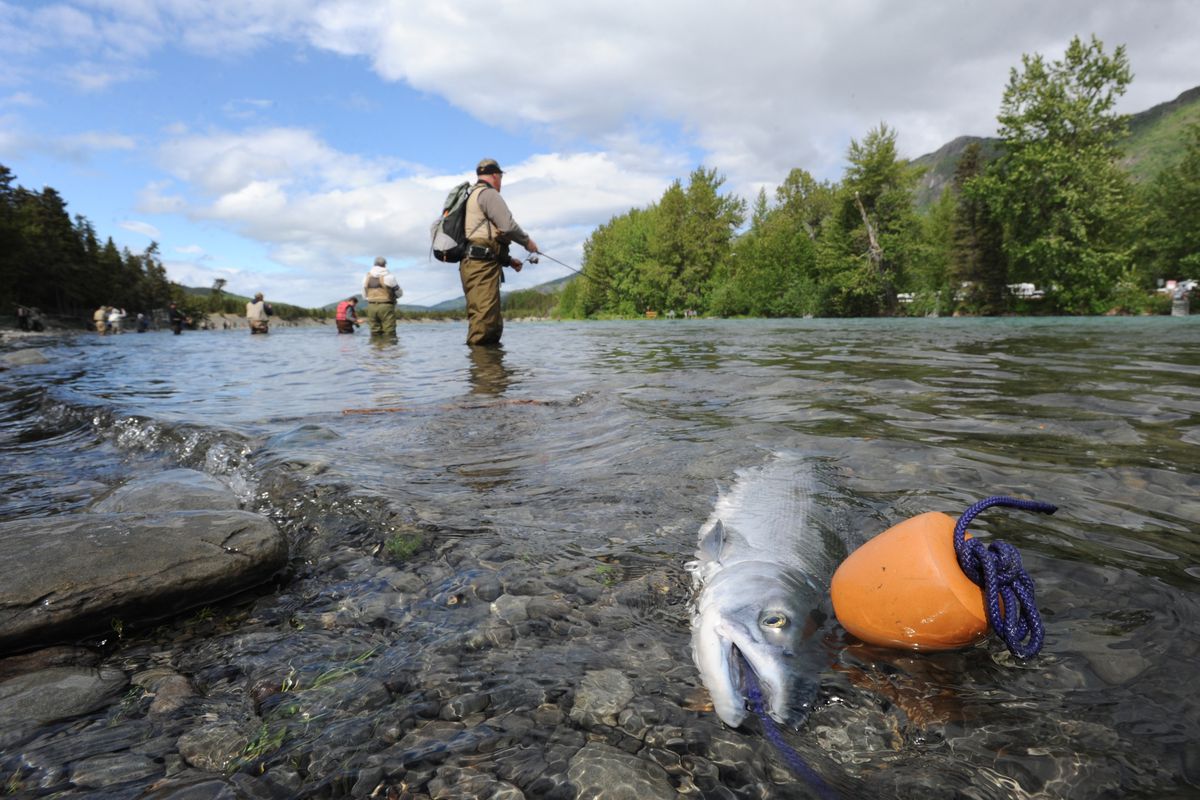 A sockeye on a stringer on the opening day of fishing near the Russian River Ferry crossing on the Kenai River on Sunday, June 11, 2017. (Bill Roth / Alaska Dispatch News)

A sockeye on a stringer on the opening day of fishing near the Russian River Ferry crossing on the Kenai River on Sunday, June 11, 2017. (Bill Roth / Alaska Dispatch News)

Another year of poor salmon returns is forecast this summer on one of the world’s most famous salmon streams.

Forecasts for Kenai River chinook (king) and sockeye (red) salmon are below average, according to estimates released this week by the Alaska Department of Fish and Game.

According to state biologists, this year’s forecast of large, early run Kenai River chinook salmon is just 4,794 fish, a return that would rank as the eighth-lowest return in the last 35 years but would be slightly higher than last year’s run of 4,216 fish. The average return over the past 35 years is more than 9,100 kings in the early run, fish that enter the river through June 30.

The department classifies large fish as those greater than 34 inches in length in order to differentiate 5-, 6- and 7-year fish from their younger, smaller counterparts.

The late run isn’t expected to be much better, with the department forecasting a return of 22,707 large kings, which would be the sixth lowest in the past 35 years and about half of the 35-year average. However, it would be about 60% larger than last year’s escapement of just 12,780 fish, which failed to meet the department’s sustainable escapement goal of 13,500 to 27,000 fish.

“The 2020 forecast gives the expectation of a run in the below average category relative to the historical average ... and comparable to the recent 5-year average,” the department wrote in its summary of the forecast.

The low forecast is based in part on poor “brood year” production for 6- and 7-year old fish, which according to ADF&G were the second- and third-lowest brood year escapements on record.

The Kenai River is world famous for its large king salmon, with the world record 97 ¼ pound king caught in May of 1985 by Soldotna’s Les Anderson. But recent years have seen a collapse in both the number and size of the fish, forcing regular closures and restrictions to be placed on both Cook Inlet commercial and Kenai River sport fisheries.

On Tuesday, the department also released its forecast for Upper Cook Inlet sockeye run, which it’s projecting will be 4.3 million fish with an inletwide harvest of about 2.3 million fish among commercial, sport and personal use fishers. The largest component of that is expected to be 1.7 million commercially harvested sockeye -- about 1 million less than the 20-year average.

The run is expected to be especially low on the Kenai River, where the forecast return is 2.2 million sockeye, or about 38% below the 20-year average of 3.6 million fish. The Kasilof River return is projected to be 723,000 fish, 26% lower than the 20-year average. However, the department predicts the Susitna River will see an above-average return of 571,000 fish compared to an average return of 384,000 fish and Fish Creek will likely see about 121,000 sockeye, or about 42% above that stream’s 20-year average.

The department’s forecast for Deshka River king salmon is similarly dire, with that stream projected to see a total return of just 10.570 kings, which is 35% below the 10-year average and below the department’s sustainable escapement goal of 13,000 to 28,000 fish.

The announcements come as the Alaska Board of Fisheries prepares for its Upper Cook Inlet Finfish meetings, which will be held Feb. 7-19 at the Egan Convention Center in Anchorage. The meetings will include 171 individual proposals regarding fisheries management in the upper inlet, which includes the popular sport fisheries of the Kenai Peninsula and Mat-Su; the Upper Cook Inlet commercial set and drift gillnet fisheries; and the personal use fisheries on the Kenai and Kasilof Rivers and Fish Creek.

Proposals before the board will include everything from minor changes to gear types to major overhauls of salmon management plans. The board meeting is expected to begin with reports from Fish and Game staff on Feb. 7 followed by public testimony over the weekend and committee work beginning Monday.

For a complete agenda and a list of all proposals before the board, visit adfg.alaska.gov.