When the water is rough, sometimes it’s easier to stomach flapjacks than flatfish 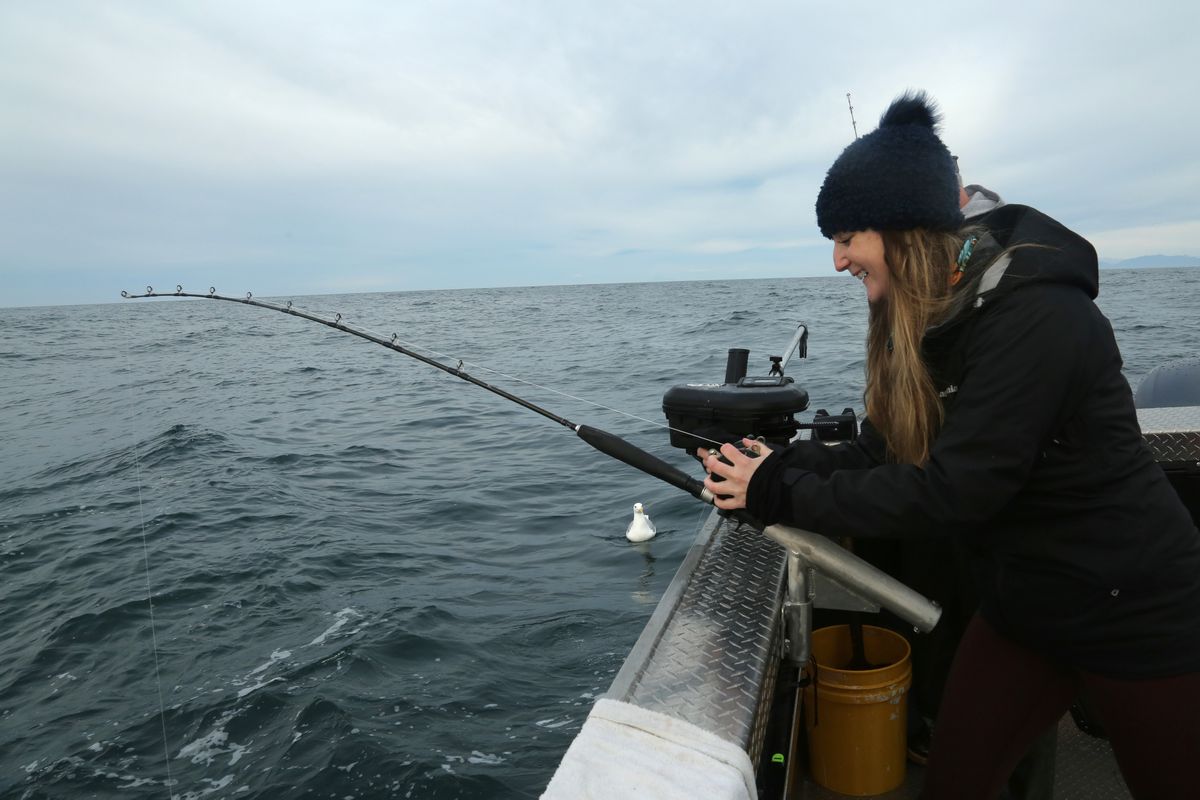 We headed out of the Homer boat harbor just before 6 a.m. on a friend’s charter boat. One of my three sisters had never been ocean fishing before. She loved water and kayaking, but I wondered if the 2- to 10-foot seas we faced would make an unfavorable impression.

My other two sisters said they had fished for halibut before, but I didn’t know much about those experiences. Maybe they were half-day charters in nice weather.

When we met in Soldotna at 3 a.m., I fussed over what they were bringing like a mother at the bus stop on the first day of school. They had coats, rubber boots, plenty of snacks and water.

To embody my responsible eldest sister’s role, I purchased some motion sickness medicine at the gas station along with extra snacks and water. I’d never taken anything for seasickness, and the side effects looked similar to what I would want to avoid.

“If you didn’t take that last night, I wouldn’t bother,” said the captain. This last-minute purchase was all I had to offer. I’d forgotten to bring ginger chews.

I have never met a captain who has been seasick. The times they have exhibited symptoms, it seemed they would rather admit to morning sickness than seasickness. The other possible causes of nausea and vomiting include everything from alcohol use to food poisoning.

As we headed out of the harbor, waves plunked like sawlogs against the hull. The roll and swell of sudsy water mass crashed across the window.

I took a moment to admire the spot welds. The captain had fulfilled a goal he made as a teenager in weld class. After he served in the Navy, worked as a welder and operated a charter business for several years, he had built this boat, named after his granddaughter.

Once a deckhand and now a captain, his son was also out fishing that day and on the radio. He was ahead of us and reported it didn’t look any better out there.

I glanced back at my sisters to make sure they were smiling. Two of them were. My youngest sister gazed out the window and seemed to marvel at the beauty of the water.

It wasn’t until the boat stopped, as is so often the case, that the combination of rolling and pitching registered on her face.

She smiled and nodded, and I could not tell if she was lighthearted or lightheaded. Was the nod just her head bobbing?

Actually, she wasn’t feeling that well. Immediately, the other four of us aboard offered suggestions. She should stand up, get out of the cabin, breathe the fresh air, eat a cracker.

Being the youngest and not at all like me, she took advice the instant it was given. Don’t look at your feet — she looked up. Watch the horizon — she turned her head to the mountains.

The one time I have been seasick, no amount of advice moved me, and I was grateful that everyone kept fishing and left me alone. When I finally staggered out on deck to fish, my fishing partners congratulated me and determined that my condition was not seasickness at all. If it were, I would not have recovered until I was on firm ground, followed by a lengthy inquiry as to why I ate second-hand elk jerky for breakfast.

So, I can say I’ve never been seasick. But, I know that I was. And, in the next 20 minutes, so were my sisters.

Only the youngest, who followed all the advice, recovered.

The captain had suggested she stand in the middle of the deck and roll with waves. Her rendition of this exercise looked like a tai chi practice. She focused on her movements — bending one knee and then the other as if on a balance board.

“You should try it,” she cheered the others, suffering at the rail.

“I’m fishing,” I said. I had the jigging rod at the back of the boat.

One sister recited the contents of her breakfast, now in a bucket. Another had her head down on the rail as if she were taking a peaceful half-body nap between retching.

The father and son captains were on the radio. “I’ve got three in the hospital,” our captain said. The son had three fish in the boat, and we had one.

After a conference that looked like a drunken dance with two of us pulling up rods, a few woozy at the edges and one in a blissful state of harmony between polarities, we decided to move locations. We would try fishing closer to shore.

I began to worry about the sickest among us. She only spoke in moans. When I asked her if she would like to keep fishing, she said something that sounded like the words, “I want to die.”

We all looked at each other. Some fishing trips feel like a trip around the Horn to Mexico via the Universe divide. Everyone aboard takes an unspoken oath to fish until the last fish is in the boat and come back again.

There was a long silence before the captain said, “Or we could head in for a pancake breakfast.”

It didn’t seem like a bad alternative. Instead of flatfish, we could have a flapjack and come back when the water was flat as a pancake.

My most agreeable sister, who had never been on the ocean, loved the water and learned a new dance move, was the first to second.

I had one dinner halibut in my cooler, got to admire a friend’s boat and had a morning on the salt water, so no complaints.

Many others have stayed out and fished in similar circumstances, and other boats did that day. Some might say saltwater fishing separates the tough from the weak. But, for those who are new to it, it is a matter of experience.

My sisters have proved plenty tough over the years, and what we wanted most was to enjoy each other’s company. I’ve been learning lately how to monitor and adjust to enjoy what the day brings. For maybe the first time in my life, a pancake breakfast seemed like a great option.