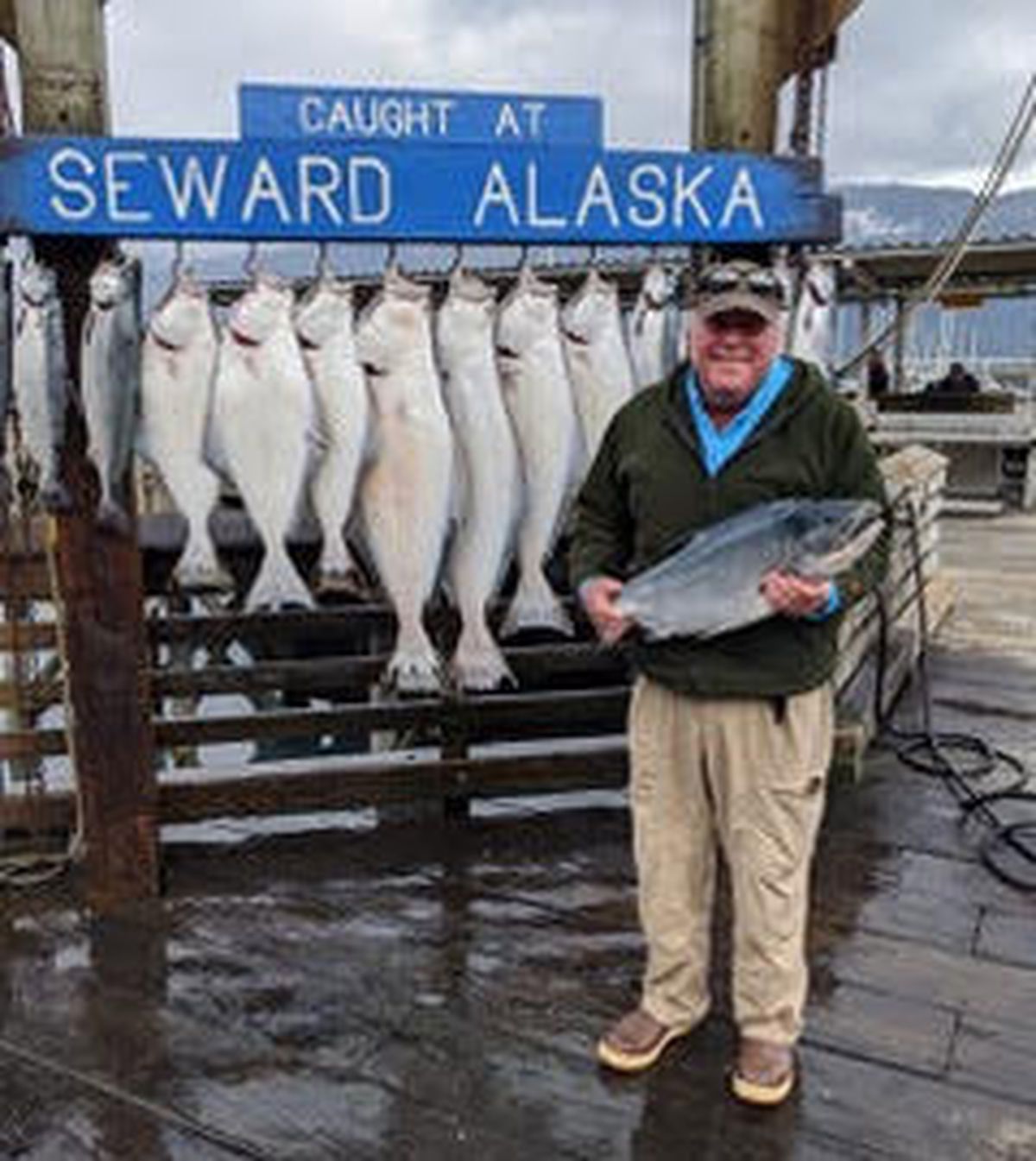 David Frenier holds the 13.61-pound salmon that earned him $10,000 as this year's winner of the Seward Silver Salmon Derby. (Photo by Philip Bottrell)

David Frenier holds the 13.61-pound salmon that earned him $10,000 as this year's winner of the Seward Silver Salmon Derby. (Photo by Philip Bottrell)

David Frenier will go down in history as the angler with the smallest winning fish in the 65-year history of the Seward Silver Salmon Derby, and he’s OK with that.

“My brother says the cash weighs the same,” he said with a laugh Monday.

Frenier, a 67-year-old from Anchorage, earned the $10,000 first-place prize for reeling in a silver nearly 1.5 pounds lighter than the previous smallest derby winner.

He landed his 13.61-pound silver Thursday while fishing the south end of Montague Island with Aurora Charters. It was the biggest of the 18 silvers caught that day by members of his fishing party, and it turned out to be the biggest of the nine-day derby.

The Valdez Silver Salmon Derby, which pays $5,000 for first place, is guaranteed to have a bigger winner than Seward this year. It runs through Sept. 6, and the fish to beat is a 14.88-pounder caught on Aug. 8 by Alisa MacInnes of Tampa, Florida.

The smallest Valdez winner is a 15.11-pounder caught in the 1971 inaugural derby.

Frenier said he’s certain there are fish bigger than his champion lurking in Resurrection Bay, but not as many people battled for them during a summer when crowds have been thinned by the COVID-19 pandemic.

“You can really tell the impacts of the pandemic,” he said. “We had no trouble finding a parking spot, and it wasn’t crowded at the dock.”

Kat Sorensen of the Seward Chamber of Commerce, which sponsors the derby, said numbers were down this year because of the pandemic and the late arrival of silvers in Resurrection Bay. She said 1,799 people bought derby tickets and 757 fish were entered.

“We saw a decrease in numbers this year across the board — in participants, overall number of fish and weight,” she said by email. “We weighed about a third of the fish we did last year.

“The virus definitely played a role that’s evident in lower participation numbers, which was coupled with a slow start for the silver salmon. We heard from captains that they were tough to come by during the derby this year.”

Frenier said crowds were so light that his party was able to book a charter the week of the derby — something that usually needs to be done well in advance.

“We saw five or six boats in the same area as us,” he said. “I’ve heard stories of hundreds of boats going out.”

Frenier, whose family settled in Alaska in 1967, said he’s an avid fisherman who takes his boat to Whittier frequently during the summer, but he had never entered the Seward derby until this year. He said he’s caught 100-pound halibut, but doesn’t think he’s ever caught a bigger silver.

He said the winning fish didn’t put up much of a fight.

“Not any more than any of the others we caught,” he said. “It took the bait and started to run and tug, tug, tug, but we were jigging and there was only about 30 or 40 feet of line.”

The second-place prize of $5,000 went to John Paul Paquette Jr., whose 13.09-pound fish also made him the winner of the derby’s youth division. Third place and $2,500 went to Philip MacDonald and his 12.78-pound silver.

Fish submitted to the derby booth weighed a total of 5,716.95 pounds. Of that, 275.77 pounds of fish were entered by Anchorage fisherman Keith Harjehausen, who won the prize for the most cumulative weight.

Sorensen said the derby was pleased with its mitigation plan, which included the online-only sale of derby tickets.

“We switched to an entirely digital system to decrease interaction and it worked well for us and our participants,” she said. “And we’re grateful that participants socially distanced and masked up when necessary to allow the derby to happen safely.”

This story has been edited to correct the spelling of Kat Sorensen’s last name.