An 11-year-old Wasilla girl lands an ugly fish at Lake Louise, and it’s a beauty 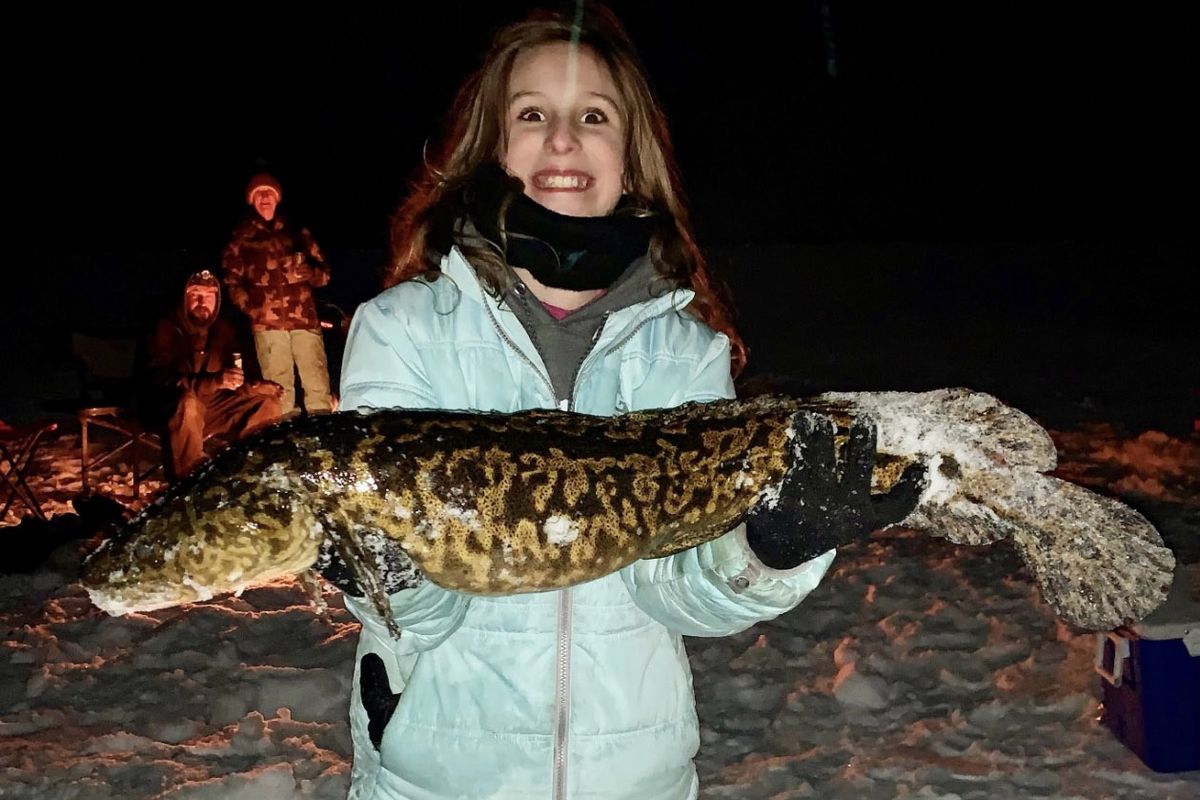 A big fish deserves a big fish story, and we’re here to tell you how 11-year-old Aimee Pike of Wasilla used her bare hands to pull a 34.5-inch, 9.5-pound burbot out of the icy waters of Lake Louise last month.

It was around midnight on the last night of a three-day fishing trip, and everyone in the party of four had caught a fish but Pike. Everyone was relaxing around a fire when Pike decided to get her gloves from a tent sheltering her fishing setup.

What she found inside made her forget all about her gloves.

“I realized my pole was in the water. I had a stand and the stand was tipped over and the pole was going down in the water, and that gave me the assumption there was definitely a fish on the line, so I checked to see if there was a fish there, and there was,” she said, her words coming fast. “I set the hook really fast. I could see a tail but I couldn’t identify what it was but I could see it squashing around. It was such a big fish, and it definitely was pretty strong.

“... My hands were going into the water with my pole and it was scaring me because I thought I was going to lose my pole, and it wasn’t my pole and reel.”

Pike struggled with the fish for a couple of minutes before getting it out of the water and onto the ice, where it flopped around for a while.

“It was not going to go out without a fight,” she said.

For her efforts, Pike received a certificate from the Alaska Fish & Game’s Trophy Fish program, which has been around since the 1960s but only recently started a special category for anglers 15 and younger.

Ryan Ragan, a program coordinator for the Division of Sport Fish, said Pike’s catch is the biggest burbot, by both length and weight, to merit a youth certificate this winter.

“Aimee should be real proud of that catch,” Ragan said. “From our perspective, it’s really great to see kids getting out and going fishing. We’re obviously proponents of getting that younger generation out on the water.”

Pike, a fifth grader, is a second-generation angler. Her mom, Kristi Olson Pike, once worked as a fishing guide in the Valley and goes by akfishergirl907 on Instagram.

Mom isn’t a fan of ice fishing, though, so Aimee hadn’t fished in the winter until some family friends invited her to join them at Lake Louise late last month.

The lake near Glennallen produced a state-record 24-pound, 12-ounce burbot in 1976. It’s known for burbot and lake trout in the winter, and burbot numbers have been on the rise in recent years, said Mark Somerville, Fish & Game’s Upper Copper River-Upper Susitna River area manager.

“People have been catching more burbot the last few years,” he said. “Back in the ’70s and ’80s Lake Louise was pretty heavily targeted because of liberal burbot regulations, and people would catch thousands of them and eventually crashed the stock.”

The lake was closed to burbot fishing for a while before reopening with a one-fish limit, Somerville said.

“Based on what we’re hearing, the burbot population may finally be rebounding,” he said. “We’re going to do a study this spring to look at population.”

Burbot — known as the poor man’s lobster for its flaky, mild flavor — taste divine but look hideous. According to Pike, they smell as bad as they look.

“That’s probably the worst-smelling fish I’ve ever smelt. It’s not a good smell. It’s potent and strong,” she said.

Yet she has an affection for the prehistoric-looking thing that someday will become the main course for a family dinner (the Pikes had to bend the tail in order to fit it in the freezer).

The fish was in the freezer for two days before it was officially weighed, and Fish & Game told Pike it probably lost a pound or two due to dehydration. It had lived for 15 to 20 years, they told her.

“It was probably feeding on bait all those years and getting fat,” Pike theorized.

Pike said she fished with jigs and herring in a hole about 9 feet deep. She’s not sure how cold it was, but figures it was somewhere around zero degrees.

“To give you an idea of how cold it was, we had Cokes and when we opened the Cokes they would turn to a slush and we had to hold them over the heater,” she said. “It was cold out, but I wasn’t leaving until I caught a fish.”

Early in the trip, Pike wasn’t quite so enthusiastic. She was bitten on the leg by a lake trout one of her friends caught — it left a hole in her new snow pants — and one night, the generator in their camper stopped working.

“At one point we could see our breath and stuff,” she said. “At one point I was kinda like, ‘This is getting (ridiculous); our generator’s broken, I kinda wanna go home,’ but I’m glad I didn’t because I caught the biggest burbot of all time, not really, but still.”