For musher Ketil Reitan, the Iditarod is just one adventure in a life full of them 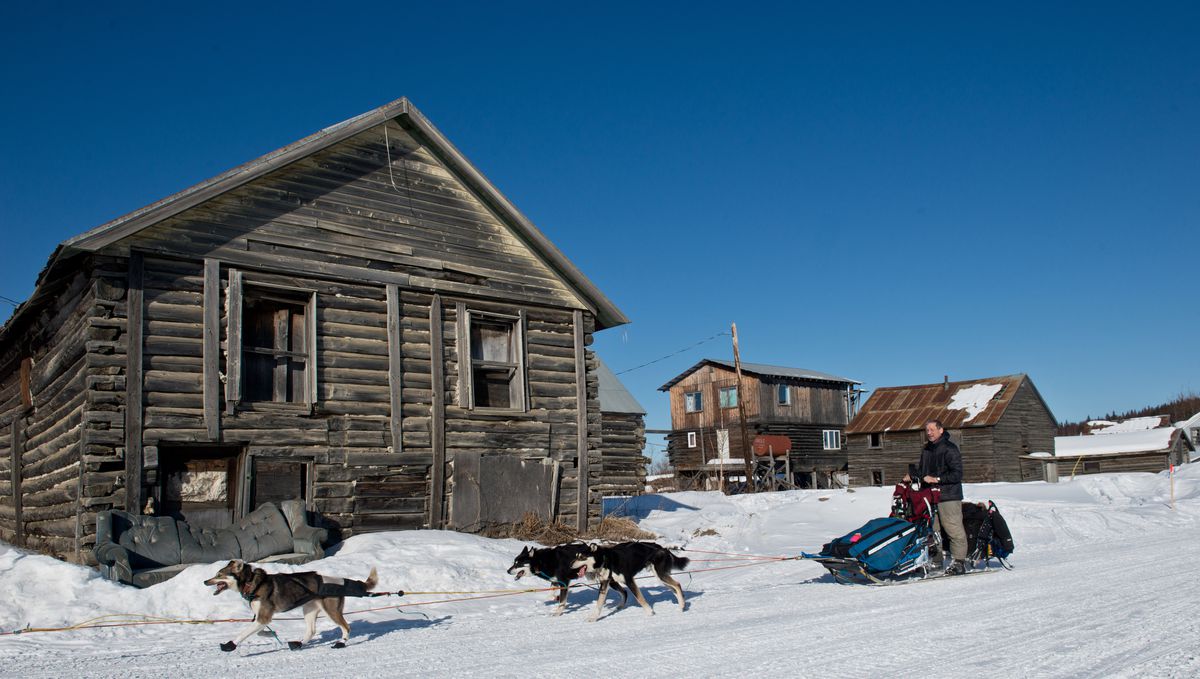 Iditarod musher Ketil Reitan passes buildings in Nulato on his way to the checkpoint in 2016. (Marc Lester / Alaska Dispatch News)

Iditarod musher Ketil Reitan passes buildings in Nulato on his way to the checkpoint in 2016. (Marc Lester / Alaska Dispatch News)

Three decades ago, caribou ran strong in the Brooks Range. Willows grew in sparse tangles across wide-open terrain. Three decades ago, Ketil Reitan was a young man, just 26, drawn to the wild and powerful landscape of Alaska's Arctic. He didn't have much money, but he had stories.

"I liked to read books about polar explorers from the old days," Reitan said.

Their trials and travails fascinated the dog musher from Norway. Since the 1980s when he first became interested in Arctic Alaska, Reitan has run several of Alaska's most challenging sled dog races and embarked on long-distance expeditions across the 49th state. He and his dogs will compete in the Iditarod for a sixth time this year, after which he and his son will set off on an adventure not unlike one Reitan first did 30 years ago.

Back then, he was completing his master's degree in fisheries science at the University of Tromsø in Norway, the northernmost university in the world.

[When will the 2017 Iditarod start? (And answers to 14 other race questions)]

"It's 70 degrees north, the same as Kaktovik," Reitan explained, referring to the place he now calls home. "For that study we had to have 18 months working experience in fisheries. So, I worked one year as a commercial fisherman in Norway and I got to go out one year with a Norwegian whaling boat.

"But that is very different from whaling in Alaska (with) a bigger boat and smaller Minke whales. I also knew some people who had seal hunting boats in Norway that went out in the ocean along the coast of Greenland."

Through hunting and whaling, his studies converged with his interest in Arctic cultures. He decided to pursue a thesis on whaling in Alaska, which brought him to the 49th state.

He met up with an old high school friend who at that time was living in a cabin in the Ambler area, along the Kobuk River in northwest Alaska, just east of Kobuk Valley National Park. They both shared a love of mushing and decided to test their backcountry skills.

They planned to take a single dog team and two-man sled east across the Northwest Arctic and North Slope, ending in Canada. Rather than send food and supplies ahead, they'd make due with what they could hunt, forage or pack. They were also determined to do as much as they could using traditional methods they'd read about in books on the region.

"We wanted to recreate some of that feeling," Reitan said. "We wanted to make all of the equipment for the trip. We did a 14-foot traditional basket sled. We built our tent by ourselves. I made some sealskin boots in Norway before I came and a sealskin parka."

He still has his parka, which has served him well in the decades since.

"We wanted to see if we could live off the land as much as we could. I didn't have that hunting experience when I came to Alaska, but I learned a lot from my friend," he said.

Before they left they hunted moose in order to leave with meat. Along the way, they followed caribou over mountain ranges and across tundra.

"We relied on firewood for cooking, so we didn't send out any fuel. The only fuel we had was for our Coleman lantern," he remembered. "We did all the snow melting with firewood, using willows in the mountains and driftwood on the coast."

From Ambler to Anaktuvuk Pass, through Nuiqsut to Kaktovik, over the northeastern Interior and across the border to the village of Aklavik in the Northwest Territories, the men and their dogs pushed through snow, ice and wind.

If the headwind was too strong, they'd bundle up and wait it out. On the high, steep slopes of the Brooks Range, the pair encountered snow too deep to sled through.

"We were just two guys," Reitan said. "When it was slow going, one person had to break trail for the dogs with the snowshoes. When we went over some of the mountain passes, we had to first go with the empty sled and then go back to get the load. We had to go two times in some of the steepest places."

In the villages, they immersed themselves in the goings on of the people there.

Falling in love in Kaktovik

"(As we) traveled from village to village, I did interviews with whaling captains on the coast," Reitan said. "That's how I came to Kaktovik. I did an interview with my future father-in-law."

That man was Herman Aishanna. Reitan became close with Aishanna and his wife, Mildred, and through them developed a relationship with their daughter, Evelyn Anguyak.

Once the mushing journey ended, another began. Reitan and Evelyn continued their courtship, eventually married and had two sons born 17 months apart, Vebjorn and Martin. The couple decided early to raise the boys in both countries and in both cultures, trading off between Kaktovik and the tiny Norwegian mushing village of Narjordet.

In winter, the family runs a mushing tour business in Narjordet. In summer, they live in Kaktovik, where they lead polar bear-viewing tours and other guided excursions.

"For us, it's natural," said Reitan. "Kaktovik and the Inupiaq culture have been part of my life for more than half of my lifetime now. I'm 56 years old and I sort of feel at home in both cultures."

In Norway, his boys learned to mush at an early age, participating in single-dog short races as children and taking on long-distance trips and races as they got older.

During the months in Kaktovik, Reitan has made it his mission to ensure Vebjorn and Martin feel comfortable on the land.

"I think it's so important that I show all of the positive values of (my sons') culture. If they are just in a (single) town or a village, they could see so many negative things, so going out and doing something and experiencing the values of their culture, I think that's very important for them."

[Reader poll results: What are the Iditarod's most memorable moments?]

His in-laws, Herman and Mildred, have passed away, but not before Herman passed on much of what he knew about his home. Reitan recalls going into the Brooks Range, out on the rivers, to camp and hunt together.

Now, though, his roots stretch thousands of miles away to a different country, and he finds himself in the position of guarding the cultural knowledge of his assembled family.

"I learned a lot about the Inupiaq culture from my boys' grandparents. This is knowledge that is very hard to pass along to the next generation. The only way to bring it is to do things like that with my boys," he said. "Unfortunately, not so many families (can) take out their kids on camping trips like it used to be when I first came to Kaktovik. It could be three generations and they would spend a week living in a tent with the wood stove. The women would go ice fishing and the men would be out hunting during the day in winter. It used to be like a little village up in the mountains … (a) taste of the nomadic culture."

After Vebjorn's graduation from high school, Reitan thought it was time to share some of his own experience with his eldest son. Last winter, after running a team in the Iditarod, the two set out on a father-son journey across the Arctic, retracing the path Reitan had first taken when he came to Alaska many years ago.

"That was very rewarding for me because sometimes I would remember things I had forgotten. It would bring up some memories of what happened when I was there 30 years ago," he said.

They still ran with only one dog team, though they did make one significant addition: a snowmachine. While Reitan ran the Iditarod, Vebjorn followed on a snowmachine to Nome. Then they switched, with Vebjorn mushing the dogs.

Next week, Reitan's cross-state trip will be a little more intense, as he tries to improve on a career-best Iditarod time of nine days, 21 hours, set last year.

Martin will follow along, and then, they'll trade off. This time, though, they plan to deviate from Reitan's original route. Taking inspiration from a book, the pair will try to follow a course laid out in the semi-biographical novel "Akiviak," loosely based on the life of Andrew Akootchook, whose sister, Mary Agiak Gordon, is the great-great-grandmother of Reitan's sons.

"This story told about how they were living inland around the Utukok River between Noatak and Icy Cape, near Wainwright. I've had a dream for many years now to go back to that area that I read about in this book because it described how they would live hunting seals and fishing around Icy Cape in the summer and in the fall they would have the sled dogs that would pull their umiak (skin boat) up the Utukok River as far as they could go," Reitan said. "Then, they would travel around by dog team in the winter hunting caribou."

From Nome, the father-son duo plan on traveling to Kotzebue, where they'll make a brief stopover to run the Kobuk 440 sled dog race beginning April 6. Then, they'll travel upriver from Noatak to Icy Cape to Wainwright, running across sea ice and tundra before reaching Kaktovik.

Neither Reitan nor his son have visited some of the villages they'll see. They hope to meet new friends, be challenged by new landscapes and get in touch with long-lost family.

If last year's trip is any indication, they'll be welcomed warmly in each village, whether they know anyone or not.

"In most villages we had never met the people we came to visit but they were friends of our friends — a big network of friends," Reitan recalled. "We were treated so well in every village. We came to Anaktuvuk Pass, for example, and they were so happy because they had not seen a dog team for many years. Not that many people travel village to village by dog team like people used to, so people were so happy to see us. Everybody feels like we are working together to help preserve the Inupiaq culture."

Reitan has, of course, noticed changes — fewer dog teams, more snowmachines, shifts in the landscape and wildlife. Now there are more willows pushing upward through the snow-covered ground and fewer fresh caribou tracks.

But some things remain the same. Three decades later, looking back on his past expeditions, Reitan said he's still surprised how comfortable he feels in open country, with a team of dogs and a companion by his side, using knowledge from the past.

"The old methods work," he said. "As long as we were taking our time, we didn't stress. We just went to a place where we could find lots of firewood. We would have a nice, warm comfortable tent. The clothing we had worked well. We were traveling first class. We didn't suffer. Sometimes we were low on food and stuff, but most of the time we had plenty. We had delicious big meals at night and the stove would be red hot.

"This is what people think is so tough and difficult, and here we are feeling like we are kings of the Arctic."

Shady Grove Oliver is a freelance reporter based in the Northwest Arctic and North Slope.