Fairbanks warms up to a cold Iditarod start on Monday 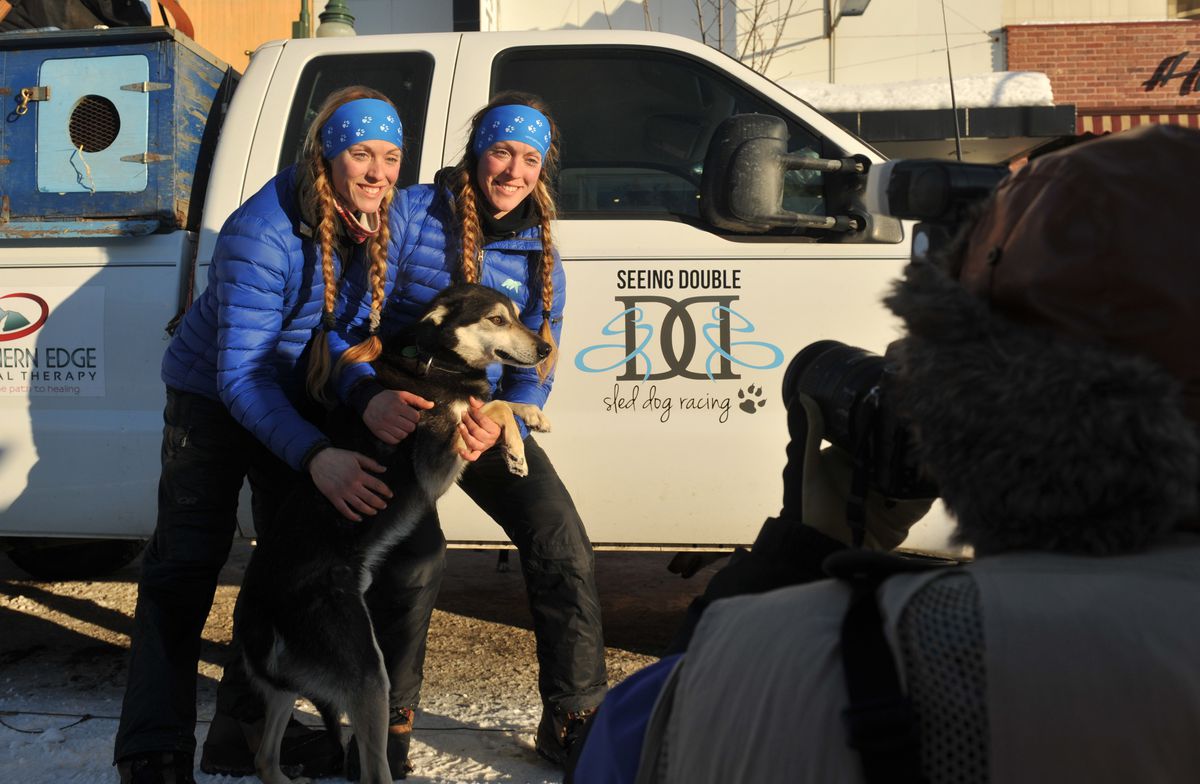 Twin sister Iditarod mushers Kristy and Anna Berington pose for a photograph before the ceremonial start of the Iditarod in Anchorage on Saturday. (Bob Hallinen / Alaska Dispatch News)

Twin sister Iditarod mushers Kristy and Anna Berington pose for a photograph before the ceremonial start of the Iditarod in Anchorage on Saturday. (Bob Hallinen / Alaska Dispatch News)

FAIRBANKS — I sat down in the Pike's Landing restaurant Sunday afternoon, overlooking the Chena River, to write about the preparations for the restart of the Iditarod Trail Sled Dog Race to Nome.

I set up the computer, took a sip of coffee and the guy seated at the table next to me asked to look at the newspaper section about the race. "Sure, go right ahead," I said to him.

That's how I met fisherman and musher Dean Osmar, who won the 1984 Iditarod in 12 days, 15 hours, at the time the third-fastest time in race history.

Osmar said he would have shaved time off the trip if he hadn't had to spend time breaking trail in front of his team on snowshoes, plowing through knee-deep snow in places.

Osmar, who lives in Clam Gulch, told me that these days equipment for mushing dogs is better, training is better, trails are better and dog food is better. But he's not convinced that the dogs are that much faster.

"The best ones we had back then were pretty equal," he said.

Osmar is in Fairbanks for the start of the 45th Iditarod — he has not raced it since 2003 — because he has a team in the race, leased by Peter Reuter, 54, of Bloomingdale, New York. Reuter and 71 other mushers will start the 1,000-mile trip to Nome here at 11 a.m. Monday. Among them is defending champion Dallas Seavey, seeking his record-tying fifth win and what would be five championships in six years.

"This race is sure to be the most competitive sled dog race in the world again," Iditarod Executive Director Stan Hooley said Sunday night.

The top-10 finishers from last year are back and five champions who have won a total of 17 races between them are participating.

It was fortuitous I sat down next to Osmar — whose son Tim has raced the Iditarod 23 times — as I had learned moments earlier that he had a big influence on two mushers I had interviewed in the restaurant parking lot. Today they are race veterans, but twins Anna and Kristy Berington, 33, came to Alaska to work as handlers for Osmar.

"The best handlers I ever had, hard workers and they were good with the dogs," he said.

The "Seeing Double" dog truck was parked near where the mushers will start the real run to Nome Monday in temperatures that would be regarded as severe in some parts of the world, but border on brisk for Fairbanks.

The overnight low is expected to be 25 below to 40 below, but it should climb all morning in the March sunshine.

Both Berington teams, more than 30 dogs in all, were outside the truck and trailer, stretching their legs after the six-hour ride north.

As kids growing up in Wisconsin, Kristy said, they had a neighbor with sprint dogs and the twins played with the puppies and were hired to clean the dogyard, which led to them racing a four-dog team.

"The dogs train at the same speeds. Even at the beginning of the year, they're not designated on Anna's team or my team, so at the end of season we pick who is going to be on which team and we try to match them up," said Kristy, who will be the last musher to start.

They agree with what former Iditarod champion Lance Mackey said are the most important qualities in race dogs — "appetite and attitude."

"They have to want to drive and run and they have to fuel themselves to do it," she said.

The dogs are comfortable in their doghouse-sized boxes, both those on the back of the pickup and those in the trailer behind the pickup.

"We like to let them out every six hours or so to stretch," she said.

Kristy, who is running the race for the eighth time, said she will have coats on the dogs if the temperature is colder than 20 below. She told me about coming to Alaska, meeting Osmar and getting a job offer a decade ago.

"That was an amazing opportunity to go to work for the 1984 champion. He was the first one to teach us a lot about distance mushing," she said.

Anna, running the race for the sixth time, said the dogs know the schedule that comes with a road trip and are used to the routine.

"When it's super cold, hydration is really important," Anna said, because a dehydrated dog is more at risk of frostbite.

Both mushers were here in 2015, the previous time the restart took place in Fairbanks, and the weather was similar — with temperatures occasionally colder than minus 40, so the Beringtons say they're comfortable with the conditions.