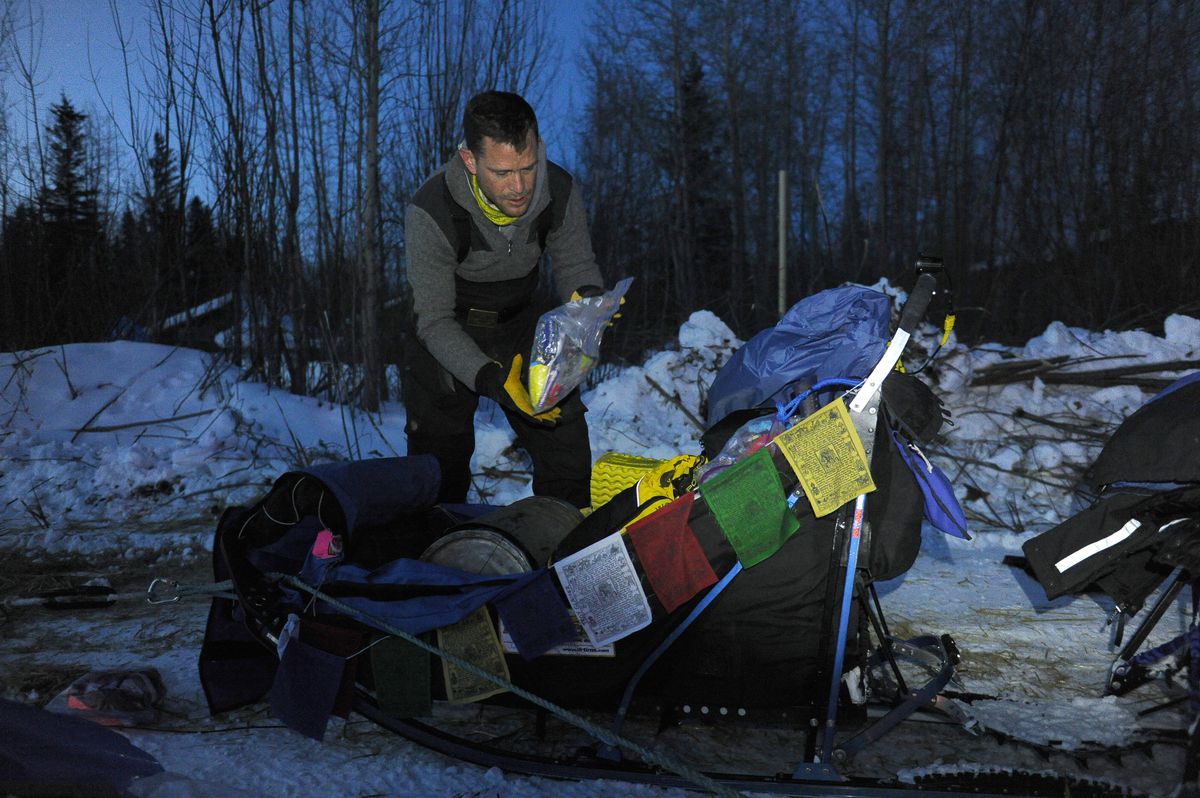 Larry Daugherty packs his sled bag in preparation to leave Tanana during the on Wednesday. (Bob Hallinen / Alaska Dispatch News)

Larry Daugherty packs his sled bag in preparation to leave Tanana during the on Wednesday. (Bob Hallinen / Alaska Dispatch News)

TANANA — After Larry Daugherty races his sled dog team 1,000 miles across Alaska to Nome, he will have about three weeks until his next challenge: climbing the world's tallest peak.

Daugherty, a 41-year-old Anchorage doctor and father of five, hopes to become the first person to finish the Iditarod Trail Sled Dog Race and summit Mount Everest in the same year.

In 2015, U.S. Army veteran Steve Watkins attempted both grueling events, but he never reached the Everest summit. About a month into his journey, a magnitude-7.8 earthquake struck Nepal, killing thousands of people and sending a deadly avalanche rumbling down the mountain.

"Part of me wants to do it for Steve. He's a buddy of mine," Daugherty, of Eagle River, said Wednesday evening, standing inside the warm community hall here, carrying a thermos and preparing to put his layers of clothing back on so he could head outside to his dog team, awaiting in minus-22 degree temperatures.

To reach his goal, Daugherty has followed an exhausting schedule. And he said he felt "enormous relief" to start the Iditarod this year, his second race to Nome, because leaving from Fairbanks meant he could finally focus on one thing. Last year, he was the 63rd Iditarod finisher.

Burning candle at both ends

"I've been running a pretty conservative schedule, but everyone's looking good. I'm feeling good," said Daugherty, who appeared energetic and smiling before leaving the checkpoint here around 8:30 p.m. Wednesday. "I'm trying to take care of myself, too, so I don't crash and burn before Everest."

Before starting the Iditarod, Daugherty spent his days balancing a full-time job as a radiation oncologist at the Alaska Cancer Treatment Center, training for his climb, running sled dogs and spending time with his family.

"Especially the past six weeks or so, I've been burning the candle at both ends," he said.

Most mornings started at 6 a.m. at the base of Eagle River's Mount Baldy, he said, which he climbs in about 40 minutes. At his office, he has a treadmill desk and walked about 10 miles while working on his computer. He usually finished his day with a 5-mile run, he said.

In the Iditarod, Daugherty is running a sled dog team from two-time champion Mitch Seavey's kennel in Sterling, about a three-hour drive from his home. To train with the dogs, Daugherty regularly flew down to the Kenai Peninsula, cramming that into his schedule, too.

Here's how he broke down his training day last Monday, a week before the official start in Fairbanks:

"I worked on Monday and then I caught a 5 p.m. flight, flew down to Kenai, raced over to Sterling and ran dogs most of the night and then back to work on Tuesday," he said, rattling off his schedule as if it were just another day. "It's just been that kind of routine. But for the most part, I've had a lot of help."

When asked if he grows exhausted, he shrugs.

"There's no balance in life," he said. "I think everybody struggles with that. I have a lot of support."

"Mushing, especially in these temperatures with a hard and fast trail, you're really kind of just sitting there," he said. "The dogs are doing all the work. So I can't say it has translated. For this, it's more getting the team ready."

But he could draw a couple of comparisons between the two risky adventures.

"I think the suffering is comparable. Both activities are pretty laden with a lot of suffering, but also with intense highs," he said.

On his way to Nome and up Everest, Daugherty will carry strings of prayer flags that he said symbolize hope, strength and well-being. The multicolored flags hang from both sides of his sled. He said he toted hundreds more in a large vacuum-sealed bag in his sled bag.

Since 2010, he said, he has collected the flags in honor of his patients who underwent cancer treatment. Each flag has a patient's name scrawled across it.

‘Hope to inspire my patients’

Daugherty said he plans to carry the flags to the finish line in Nome and then up Everest, leaving them hanging on the mountain. As the threads tear off, carried by the wind through the air, he said the loose strands will represent prayers and good thoughts on behalf of those they're dedicated to — the patients.

He keeps them in mind, too, when he feels his worst.

"Cancer is obviously a hard thing. I see people every day who are confronted with the hardest challenge of their life and, you know, I hope to inspire my patients. As I climb, I actually try to climb with oncologists a lot because as you're exposed to altitude, you get nauseated, you get a headache, you're fatigued, you might have diarrhea, it's many of the same things that happen to cancer patients during treatment," Daugherty said. "It just gives me enormous empathy for what my patients go through."

He plans to leave for Nepal on April 7.