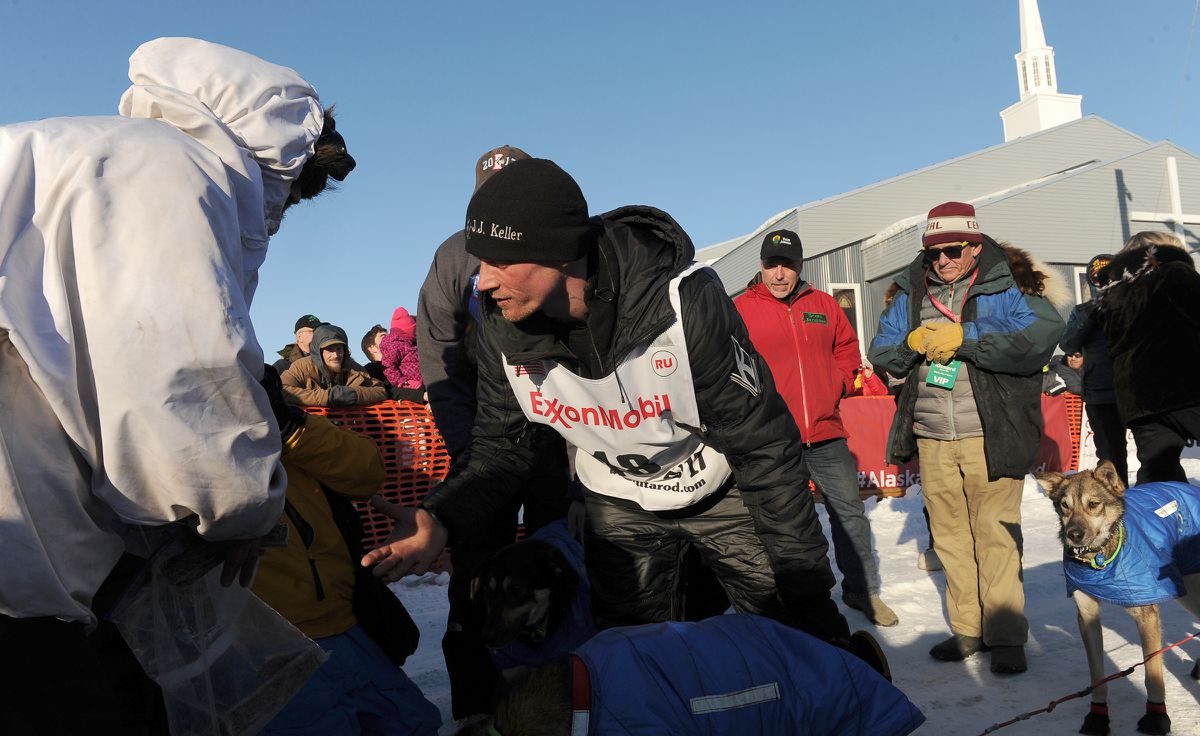 NOME — Four-time Iditarod champion Dallas Seavey ran on the side of his sled as his team sped down Front Street here Tuesday. He hopped back on the sled runners kicking his foot across the snow and pushing a ski pole across the ground to help propel his seven-dog team forward in the 7-degree temperatures.

Seavey wanted to go faster. Nicolas Petit, 37, of Girdwood, and his 13 sled dogs were close behind.

As 30-year-old Seavey pulled closer to the burled arch over the finish line, he pumped his fists in the air and the crowd gathered around the road cheered. Seavey reached Nome in second place at 6:24 p.m., nearly three hours slower than his dad, Mitch, and less than five minutes ahead of Petit.

He jumped off his sled and gave his dad, the 2017 Iditarod champion, a hug.

"And this dude made it, too," he said about his father, before picking up his 6-year-old daughter, Annie.

At 6:29 p.m., Petit and his 13 sled dogs ran across the finish line, securing third place, his best finish yet. Petit said in an interview that he could see Seavey ahead on the trail, but couldn't muster enough speed to catch up.

"I thought there was a chance but he showed me the speed he still had in reserve on the way to White Mountain," Petit said of the checkpoint 77 miles from Nome. "It was a little intimidating."

Petit said he helped Seavey on the trail between White Mountain and Nome, taking the vet book Seavey left behind at the checkpoint in Safety, 22 miles away, and giving it to him at the finish line.

Mushers present those books to the veterinarians at each checkpoint and they serve as journals documenting the dog teams' health. They're one of the "mandatory items" the race requires mushers to keep in their sleds, and which are checked by race officials at the finish line.

Seavey thanked Petit on Front Street, both of their sled dog teams stopped side-by-side. Petit told Seavey to remember him when the Iditarod takes mushers' votes for its annual sportsmanship award.

Petit also issued a warning before he left Front Street with his dog team.