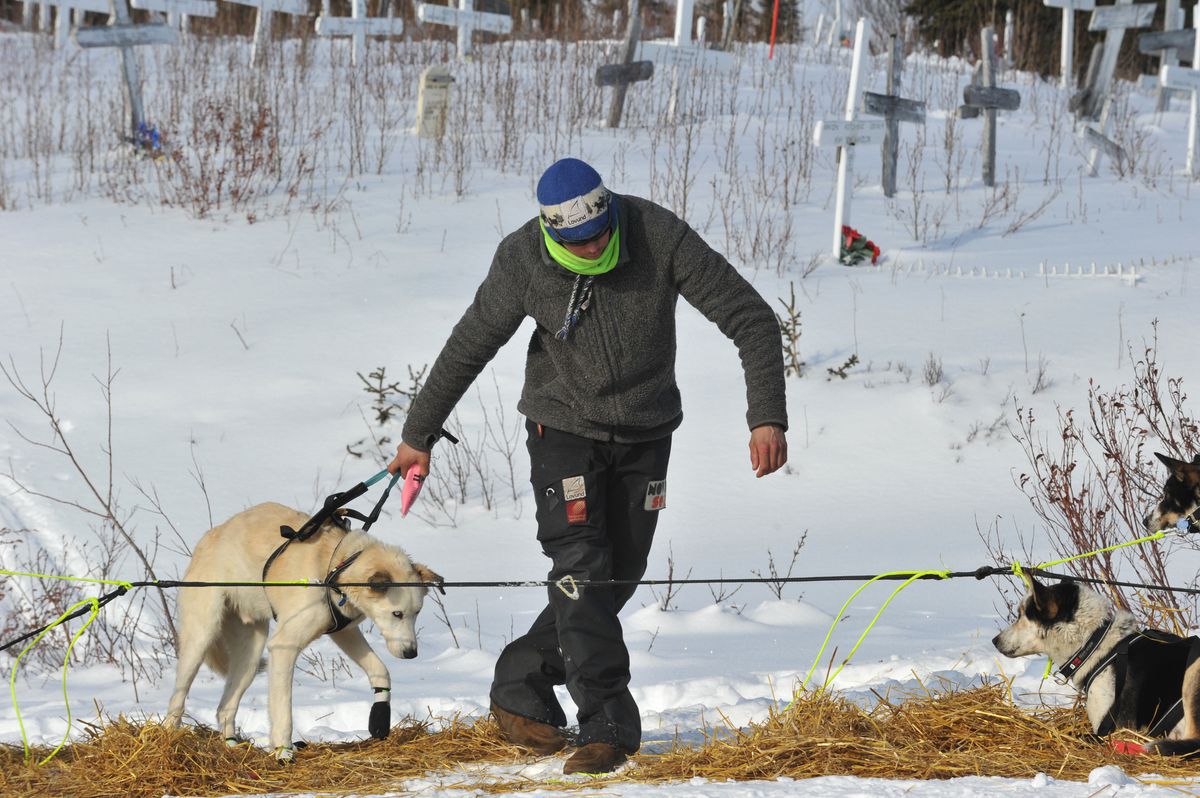 The fast finishes keep coming in the Iditarod.

Ulsom and a team of eight sled dogs reached Nome's Front Street finish line at 11 p.m. in a time of 8 days, 11 hours — bettering by 20 minutes the record set by Dallas Seavey in 2016. Earlier Tuesday, Mitch Seavey set a new speed standard for the 1,000-mile by slicing more than seven hours off the previous record.

Perhaps as impressive as Royer's speed was her team size. She finished with a full team of 16 dogs. The next biggest team among this year's top five is the team of 13 that led Nicolas Petit to third place.

Ulsom and Royer are frequent members of the Iditarod's top 10.

Ulsom has never finished lower than seven in five races and has finished a career-best fourth twice, the last time in 2014.

Royer has six top-10 performances in 14 finishes,  including three in the last four years. Her highest finish came in 2015, when she placed fourth.

Another dog has died on the Iditarod Trail.

A release from the Iditarod Trail Committee announced that Flash, a 4-year-old male in the team of veteran racer Katherine Keith, collapsed in harness and died "shortly thereafter."

The incident occurred at 1 a.m. Tuesday about 10 miles from the Koyuk checkpoint according to the press release.

A necropsy will be conducted to determine the cause of death.

The death is the second dog to die on the trail and the third to die during the race this year. A dog in the team of Seth Barnes, 2-year-old Deacon, collapsed just outside of the Galena checkpoint Thursday night. Another dog, 2-year-old Smoke, died after overheating on a cargo flight from Galena to Anchorage.

The Iditarod announced Monday that Groovy, a 3-year-old male dropped by musher John Baker, died after getting loose from his handler's Anchorage home and was apparently hit by a vehicle. The dog was released by race officials on Saturday.

It's Mitch Seavey's race to lose.

After finishing his eight-hour mandatory rest Tuesday morning, the 57-year-old Seward musher made the charge for Nome, leaving the checkpoint at 7:36 a.m.

Seavey is hours ahead of his nearest competitor, his son and four-time champion Dallas Seavey. If Mitch can make the 77 miles to Nome without incident, he will collect his third championship, best his own record of being the oldest musher to win the race and break the race speed record set by his son in 2016.

[Mitch Seavey poised for a 3rd Iditarod victory: 'I felt like I was going to win it for a long time']

However, while dominant leads in White Mountain generally end the same way, it's never a given. In 2014, four-time champion Jeff King looked poised to win his fifth after leaving White Mountain with an hour's lead over his nearest competitor. But a fierce coastal storm stalled him just a few dozen miles from the finish line. King scratched and Dallas Seavey, having left White Mountain in third, leapfrogged over King and Aliy Zirkle to collect his second win.

While the elder Seavey seems all but uncatchable, the race for second is still on. Girdwood's Nicolas Petit is scheduled to leave White Mountain at 9:48 a.m., only 13 minutes behind Dallas Seavey. Petit is the only musher with a shot at disrupting what will be the third straight year the Seaveys will have finished 1-2 in Nome.

Only two other mushers were in White Mountain as of Tuesday morning, with Joar Leifseth Ulsom having arrived at 5:15 a.m. and Jessie Royer at just after 7 a.m.

It typically takes mushers eight to 10 hours to make the final run from White Mountain to Nome. Expect Seavey to cross the burled arch around in late mid to late afternoon.