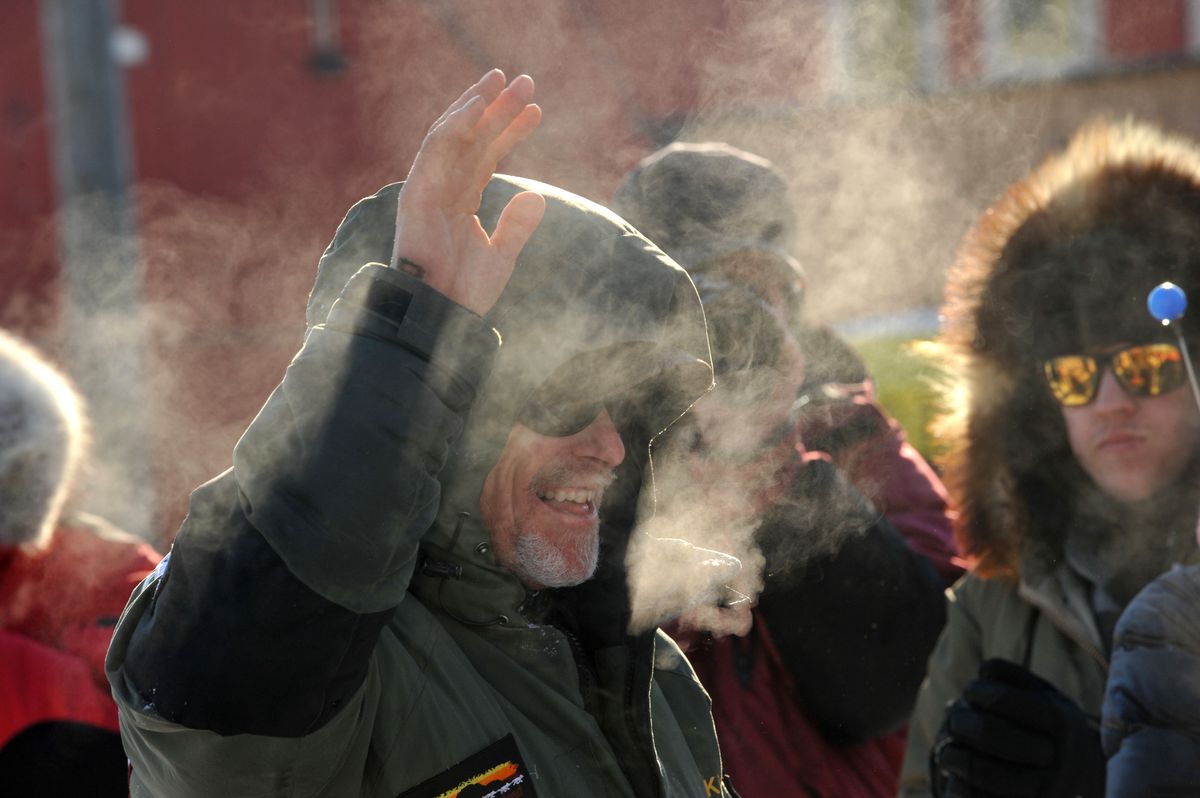 Jeff King waves to fans in the finish chute Wednesday in Nome after passing 19 teams in a spectacular run from Unalakleet to Nome. (Bob Hallinen / Alaska Dispatch News)

Jeff King waves to fans in the finish chute Wednesday in Nome after passing 19 teams in a spectacular run from Unalakleet to Nome. (Bob Hallinen / Alaska Dispatch News)

With an historic Iditarod finish only a few hours old, the enormity of Mitch Seavey's accomplishment has yet to fully sink in. The sport has been changed forever, and neither Seavey nor the Iditarod will ever be the same.

Seavey's extraordinary run to Nome wasn't the only feat of this race, but it was the exclamation point. With more than half of the teams still making their way to Nome on Wednesday afternoon, we can't help but wonder how many more jaw-dropping feats Iditarod 45 has in store.

A look at some of this year's most memorable accomplishments:

— Mitch Seavey (1st): The 57-year-old from Sterling showed the world how incredible sled dogs can be. His finish in 8 days, 3 hours, 40 minutes is nothing short of amazing.

Seavey won by guiding the fastest dog team the Iditarod has ever seen while never running his animals longer than nine hours at a stretch.

While the record is unfathomable to some, a handful of a mushers are sitting in Nome today thinking about how to break it next year.

— Dallas Seavey (2nd) and Nicolas Petit (3rd): Who would have thought that two pinpoints on a map could create such entertainment? Anyone with an Iditarod Insider subscription who watched the GPS tracker Tuesday witnessed a display of incredible competitiveness, dogmanship and sportsmanship. Seavey and Petit's trackers were locked within their miles of each other for most their run from White Mountain to Nome, but as they both hit Safety, only 22 miles from the finish line, 13 minutes separated the two contenders. Each musher's tracker bounced back and forth, hitting speeds of more than 11 mph — with Petit's tracker reaching 14 mph several times.

In the end, Seavey arrived on Front Street less than five minutes ahead of Petit, clinching a 1-2 finish for the Seavey family for a third consecutive year.

Petit's incredible display of speed earned him the Fastest From Safety to Nome Award for the second time in his career — by three minutes over both Mitch Seavey and Jeff King. Only the top 20 are eligible for this award and the Leonhard Seppala Humanitarian Award.

— Joar Ulsom (4th): The Norwegian delivered yet another top-10 finish — he has five in five races — and his best to date. Like the three mushers ahead of him, he beat Dallas Seavey's previous record time. Ulsom, Petit and the Seavey duo are now the only four mushers in Iditarod history to run the race under eight-and-a-half days.

— Jessie Royer (5th): In addition to an excellent finish, Royer is the only musher in Iditarod history to finish in the top-five with all 16 dogs in harness. Accomplishing that in less than nine days is special. In addition to Royer's dog-care feat in Iditarod, she finished the Yukon Quest four weeks ago, and only dropped two dogs there. That adds up to 2,000 miles of racing with 26 out of the 28 starting dogs (several of her dogs ran both ultramarathons).

— Jeff King's (11th): A finish outside the top 10 is not something likely to be remembered, but the run King had along the Bering Sea coast this year will go down as one of the greatest come-from-behind pushes the race has seen. King went from being 31st into Unalakleet — an all-time low in the standings for him — to 11th in Nome, passing 19 teams on the final 250-mile stretch.

— Robert Redington (22nd): The grandson of Iditarod founder Joe Redington Sr. scratched in Galena during in his first race last year. He returned on a mission. Fresh off his Northern Lights 300 victory earlier this year, Redington captured the coveted Rookie of the Year Award after trailing fellow rookie Sebastien Verngaud virtually the entire race. Robert is the first Redington to win rookie of the year.

— The Redington family: It has been 43 years since three Redingtons crossed under the burled arch in Nome. That was 1974, the second year of the Iditarod, when Joe Redington Sr., Joee Redington and Raymie Redington all raced.

Well, the Redingtons are back in force — and better than ever. Ray Redington Jr. who finished seventh, Ryan Redington, with a career-best 14th place, and Robert Redington (22nd), become the first set of three brothers to finish the Iditarod in the same year. It's also the best finish by three family members in a single race with all three in the top-25. Father Raymie has to be proud of his boys.

The Iditarod is far from over and there are surely many more amazing stories to come.

Jake Berkowitz is a three-time Iditarod finisher, including an eighth-place finish in 2013, when he was awarded the Alaska Airlines Leonhard Seppala Humanitarian Award. He has finished the Yukon Quest twice, both times in fourth place, and won the Rookie of the Year award in 2012. This is his second year of Iditarod commentary for Alaska Dispatch News.  Look for his commentaries daily during the race.