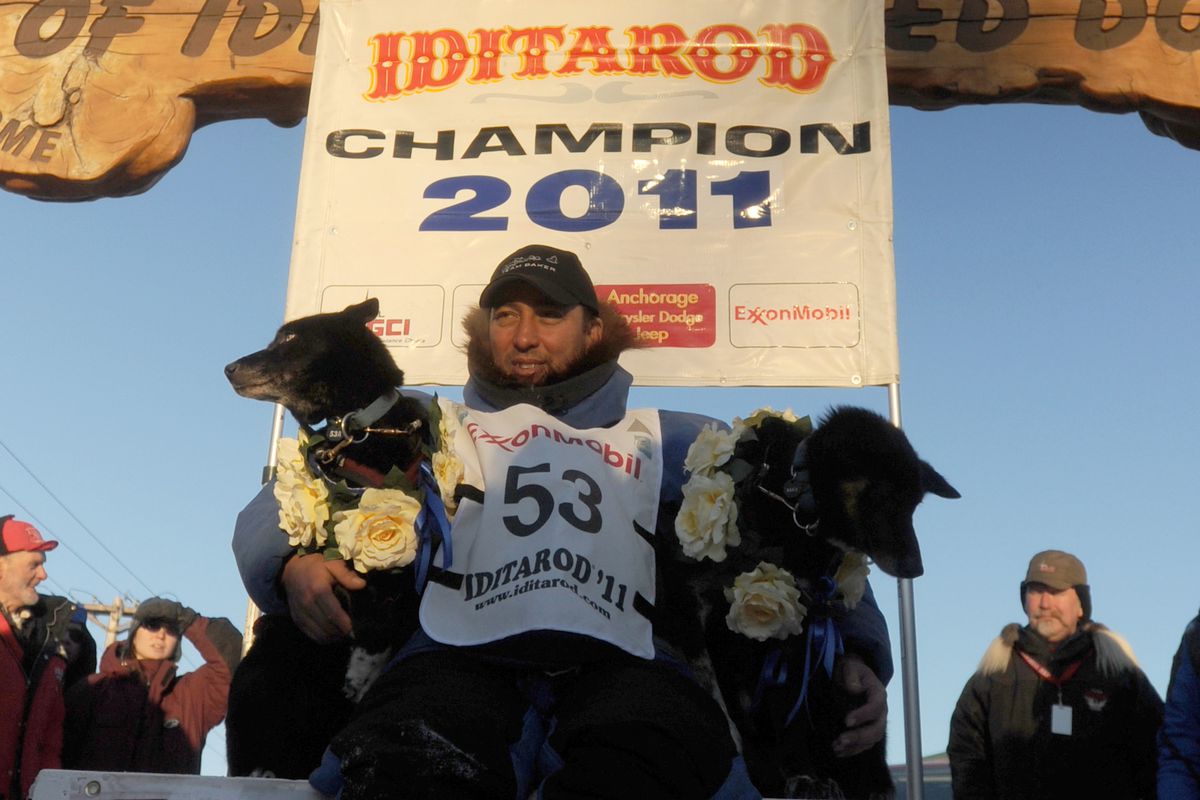 Former Iditarod champion John Baker has pulled out of this year's race.

The Kotzebue musher said Monday he never planned to compete in the 2018 Iditarod Trail Sled Dog Race but signed up and paid the $4,000 entry fee because he wanted to support the event as controversy swirled around four-time champion Dallas Seavey and his dogs' failed drug tests.

"The Iditarod has been really good to me and I didn't want to appear like I was boycotting, so I signed up," Baker, 55, said in a phone interview.

Baker officially withdrew from the 2018 Iditarod on Saturday, two weeks before the start of the 1,000-mile race to Nome.

Baker said that for months he has wanted to announce his withdrawal from the race and his decision to focus on his growing business. But the timing grew complicated, he said.

First, Seavey was fighting the Iditarod Board over its handling of the drug test results. Seavey called for a majority of the Board to resign, including Baker's brother, Andy, the Board president. Later, a group of mushers also demanded Andy Baker immediately step down.

Then recently, John Baker found himself in PETA's crosshairs after one of his former employees, Rick Townsend — who now lives in Minnesota — accused him of abusing dogs. The Anchorage Daily News has been unable to corroborate Townsend's claims, which Baker flatly denies.

Baker said he is simply not competing in the 2018 Iditarod because he's busy with the consulting business he owns with his fiancee and fellow musher, Katherine Keith. It's positive news, Baker said, and he's passionate about the job: helping rural communities get money for the projects they need, and helping manage the construction work.

"It has really taken off," Baker said of the business, Remote Solutions. "When we first started, I was working a couple hours a week, meeting with communities. Now, there's not enough time in the day."

Baker has competed in the Iditarod 22 times since 1996, winning nearly $603,000 in prize money. In 2011, he placed first, ending Lance Mackey's string of four victories and securing the first Iditarod win by an Inupiaq musher.

"I tried for 16 years to win the Iditarod, and when I won the Iditarod I was surprised what a big deal it became — not necessarily for myself, but for the state of Alaska and the smaller communities," Baker said. "There was so much pride."

Baker has a kennel of about 60 dogs in the Northwest Alaska town of Kotzebue.

Earlier this month, Townsend's claim that Baker abused his dogs surfaced online. Baker denies ever abusing any of his dogs. The accusations prompted a news release from PETA, calling for law enforcement to investigate Baker's kennel. Kotzebue police said Monday that the investigation is ongoing.

The Daily News has not been able to corroborate any of the employees' claims. Handlers who worked at the kennel at the same time said they didn't see any abuse.

Photographs Townsend sent ADN as evidence of the abuse turned out to be fraudulent and taken not at Baker's kennel, but from unrelated internet postings.

"I don't spend any time thinking about that," Baker said of the abuse allegations. "I don't care what he says about me."

Townsend also faces felony theft charges in Kotzebue related to his time with Baker. He says he was unfairly accused; Baker said Townsend stole from him. There is currently a warrant out for Townsend's arrest, said acting Kotzebue Police Chief Greg Russell.

Baker said he has no plans to return to the Iditarod anytime soon. He said he will continue to focus on his business and is treating the entry fee as a donation to the race organization.

"They've done a lot for me," he said. "The event is just a really, really special event. It pulls us all together as Alaskans."

Baker's fiancee will still compete in this year's Iditarod with their kennel's main racing team.

"John Baker has been a big part of the Iditarod Trail Sled Dog Race on and off the trail since 1996," Iditarod Race Marshal Mark Nordman said in a statement Monday.

"We'll definitely miss John out on the trail this year, but know that Kotzebue will be well represented by his partner, Katherine Keith, as she'll have best team from the Baker kennel."

Baker said he hopes to follow this year's Iditarod as a spectator, traveling to some checkpoints.