Jake Berkowitz: Petit in control of the 2018 Iditarod with a big move 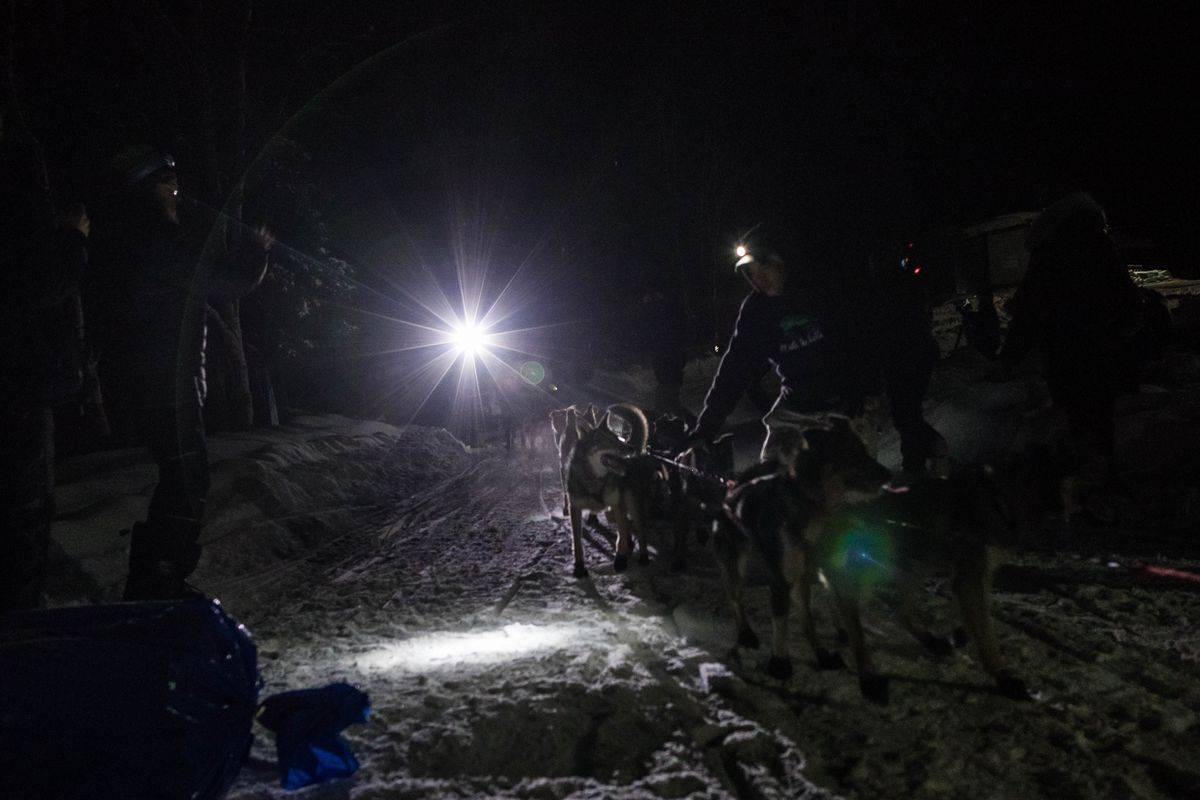 Nicolas Petit arrives in Anvik at 5:21 a.m. He was the first musher to the Yukon River village and claimed a prize of $3,500 and a five-course meal. (Loren Holmes / ADN)

Nicolas Petit arrives in Anvik at 5:21 a.m. He was the first musher to the Yukon River village and claimed a prize of $3,500 and a five-course meal. (Loren Holmes / ADN)

The Savvy Frenchman, Nicolas Petit, has made his move and has positioned himself as the leader of the 2018 Iditarod. Any thoughts that anyone once had that Petit's dogs had lost their edge and their impressive speed — as seen in his slow run from Nikolai in to his 24 at McGrath — were quickly squashed after an impressive run off of his 24 in McGrath.

Petit, who once trailed early race leader Mitch Seavey by 15 minutes, pulled into the ghost town of Iditarod with a 50-minute lead on Seavey. Petit's savvy move to adjust and take his 24 earlier than expected in McGrath also put a significant distance in between the races leader into the halfway point of Iditarod, Joar Leifseth Ulsom, and himself and allowed Petit to leave Iditarod with a 2.5-hour lead over Ulsom. Although Ulsom, seemed confident in his decision to push to Iditarod for his 24, I am sure he will be second guessing that decision for many months to come!

If the race wasn't interesting enough already, there are some major strategic decisions that will come up in the next 200 miles as teams race to Kaltag and the beginning of the overland portage to the Bering Sea Coast. Leaving Iditarod, Petit made the first major strategic decision. Petit, as expected, just let all his competitors know that he is here to win and if they want to beat him, they better start making moves now. Mushers really only have two viable options for how to cover the 220-mile distance between Iditarod and Kaltag.

Option A: The 3-Run Maneuver now known as the Petit Move

Petit has made the biggest move of the 2018 race so far and after pushing to the front and taking the lead from Seavey, he continued to push and opted for a long run from the checkpoint of Iditarod blowing through Shageluk and arriving into Anvik after a solid 10-hour Run (Run 1) and claiming the first to the Yukon Award including cash and a five-course meal. From Anvik, Petit will most likely blow through Grayling and put on another solid 10-hour run before shutting it down in Eagle Island (Run 2). After his rest, he will push on with another 10-hour run into Kaltag (Run 3).

Option B: The 4-Run Maneuver

Mushers will run from Iditarod to Shageluk (Run 1) and shut their teams down for a rest and then blow through Anvik and rest once again in Grayling (Run 2). After Grayling, they will run the 62-mile stretch to Eagle Island (Run 3). After resting in Eagle Island, mushers will make their final push to Kaltag (Run 4) and the end of the Yukon River.

[A chance encounter, a candlelight reunion: These mushers found love on the Iditarod trail]

Surprisingly all the Top 10 have opted for Option A except for Petit!

With Petit's bold move, his 1-hour lead that he built going into Shageluk could easily turn into a 4-hour lead when the front teams leave Kaltag. This move doesn't come without some serious risk. Long runs can always slow a team down and with nearly 400 miles left of the 2018 Iditarod, if his team slows there will be plenty of teams behind him to pick him off.  Petit, who pulled this move off back in 2013 the last time the Iditarod took the southern route, clearly knows the risk vs. reward in this strategic decision.

The lead pack of three continues to strengthen and pull away from the chase pack. To no one's surprise these three veteran mushers also were at the front last year, with Seavey finishing first, Petit third, and Ulsom fourth. However, the chase pack is not giving up and the Top 10 is in a constant shuffle and after some big moves we see the dynamic duo of the Kuskokwim Boys rounding out the top five, with Richie Diehl pulling in fourth into Shageluk. His good friend and 4-time defending Kuskokwim 300 Champion, Pete Kaiser, was only 5 minutes behind. While there are no guarantees in Iditarod, it is a certainty that the villages along the Kuskokwim are going crazy with these two young stars in the Top 5.

Following the "Kuskokwim Two" and rounding out the Top 10 is Ray Redington, Wade Marrs, Jessie Royer, Linwood Fiedler and Aaron Burmeister. With only 40 minutes separating fourth place from 10th place, we are sure to see some incredible racing in the next 400 miles!

No record-setting pace this year. Although the 2018 Iditarod seems to be flying by, it looks like when teams begin to depart Kaltag tomorrow night the race will be about 10 hours off of Seavey's record win last year when he finished in 8 days 3 hours and 40 min.