‘A sinking feeling in my throat’: Iditarod mushers recount hours lost and freezing along the trail 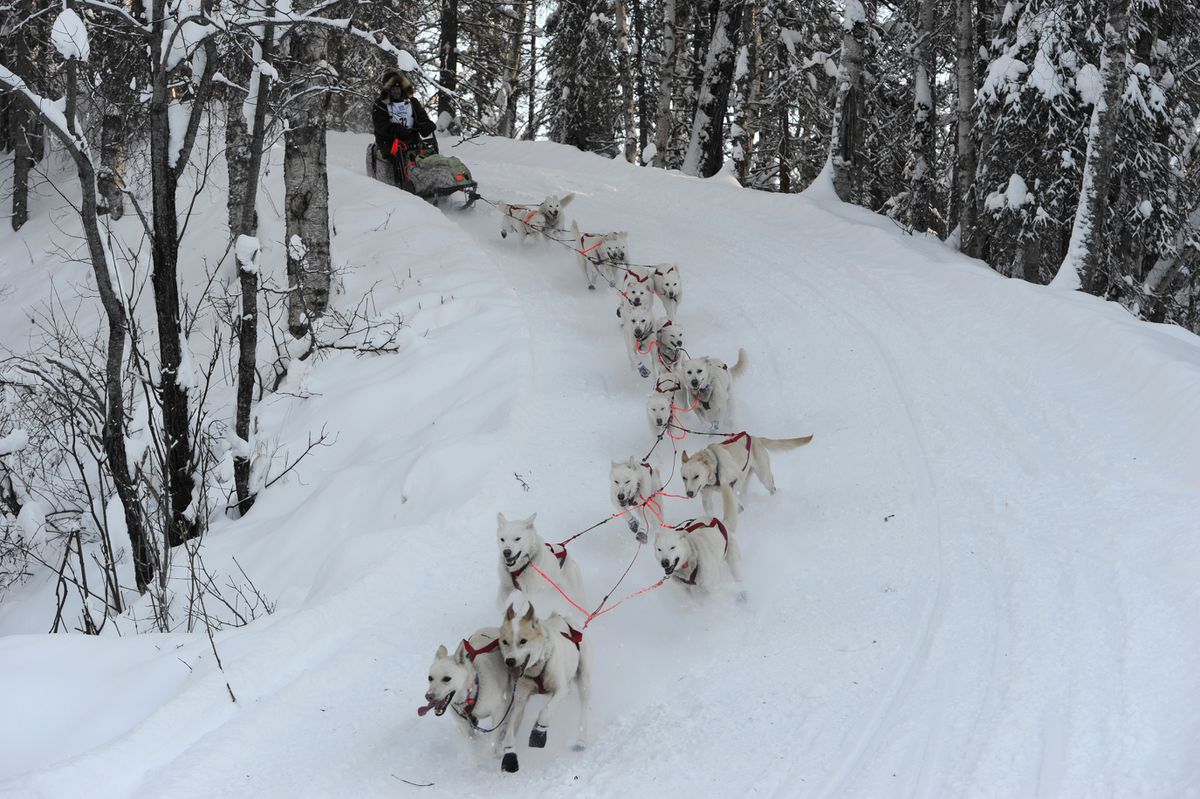 Jim Lanier drives his dog team down Corral Hill during the restart of the Iditarod Trail Sled Dog Race in Willow on March 4. (Bill Roth / ADN)

Jim Lanier drives his dog team down Corral Hill during the restart of the Iditarod Trail Sled Dog Race in Willow on March 4. (Bill Roth / ADN)

Veteran musher Jim Lanier was about 40 miles away from the Iditarod Trail Sled Dog Race finish line in Nome when things started to go wrong.

He lost the trail in strong winds and darkness, had to huddle with another musher for hours in freezing temperatures, and without emergency help, he said, death would have been certain.

At age 77, this was Lanier's 20th time racing the Iditarod. At the last couple of checkpoints before Safety — the final stop before Nome — he felt increasingly weak and unsteady on his feet. Still, the Chugiak musher was confident he could finish.

"My team was strong. I knew I could make it to Nome if nothing went wrong," he said. "But I'd have trouble dealing with it if it did go wrong."

He and his team of 13 dogs left the White Mountain checkpoint, headed for Safety. They made it to the Solomon Blowhole, a section of the trail known for extreme winds. It was dark. With the wind and snow, he lost sight of his lead dog. He kept going, hoping soon he would see trail markers again along his route, assuring him he was on track. But he didn't.

"I kind of floundered around in the deep snow guessing where the trail was and trying to get my team to go that way," he said, "but I never found the trail."

Then, a spark of hope. Lanier saw a headlamp glowing in the distance. It was Larry Daugherty, Lanier said, a musher who had already been helping Lanier along the way because he was sick with tracheobronchitis.

Lanier hoped Daugherty might be able to help get his team turned around. He yelled out. But Lanier was out on the sea ice, too far to be heard. The headlamp went on by.

"That put a sinking feeling in my throat," Lanier said. "I knew my best chance to get out of that had come and gone."

Musher Monica Zappa and her dog team came along, too, and she tried repeatedly to help get Lanier back on course. But her dogs, excited and ready to keep running, bolted for the sea ice and she had to chase after to make sure she didn't lose them.

Then, another musher. Lanier's longtime friend, 57-year-old Scott Janssen of Anchorage, had gone off trail in the same treacherous area. He got back on track in a storm so bad that he could barely see his front three dogs. His team of 11 was charging along when, suddenly, the dogs' ears all perked up. They looked to the left.

Janssen looked over. He saw the reflectors of a dog sled that was facing the wrong way.

"I slowed my team way down and yelled, 'Are you OK?' And I heard a voice yell back, 'I need help,' " Janssen said. He made his way over to find that it was his friend, whose sled was stuck on a piece of driftwood. "(Lanier) said, 'Scott, I'm in trouble.' "

Janssen worked on untangling the dogs. He took his gloves off to do so and they blew away in the wind. Lanier was starting to freeze at that point, and so were the men's corneas.

Despite their best efforts, the two eventually decided they would not be able to make it to Nome by mushing their dogs.

"It took quite awhile to get to that conclusion. It was after many failed attempts to get going again," Lanier said. "At one point, Scott said, 'I'm not going to leave you here, Jim.' And for that, I was grateful."

The two huddled next to each other, ruffs pulled up, Janssen rubbing Lanier for warmth. They told each other stories about things that had happened on the trail in the past. They talked about the possibility of losing fingers.

"I said, if we lose our fingers we'll make necklaces out of them," Janssen said. "And (Lanier) said, 'What?!' And I said, then if people say, 'You lost your fingers,' we can say, 'No I didn't, they're right here!' Here we sat there facing death in the face, and we were able to laugh at different times."

Janssen at one point called his family on a satellite phone to tell them he loved them.

Then, out of the storm came three people on fat bikes.

"I have no idea what their names are," Janssen said, "but they stopped and they came over and they catch us two mushers spooning in the snowstorm and they said, 'Can we help in any way?' "

Someone eventually pushed the help button on Lanier's GPS tracker, signaling to race officials in Nome that they needed assistance. Janssen's hands were too frozen to push it himself, he said. The Iditarod Trail Committee got the alert for the need for help around 7 a.m. Friday.

Zappa had gone on to the Safety checkpoint in order to send help back to Lanier. The decision to do so was incredibly difficult, she said.

"I didn't know how hypothermic he was," she said. "I've been going over in my head a lot. Did I do the right thing? It's kind of been difficult for me. I kind of wish I had just pressed the button for him."

Musher Jessie Royer was in Safety when Zappa got there. Royer headed out on a snowmachine to help Lanier and Janssen. She was the first responder.

"She gave us a drive to Safety — literally," Lanier said. By then, the men were "just sort of shriveled up into ourselves."

Lanier and Janssen, both hypothermic, got a ride on Royer's snowmachine. Not much later, they met up with another snowmachiner who then gave Janssen a ride. A search-and-rescue team helped the men and their dogs. After reaching Safety, where Lanier and Janssen scratched at 11:30 a.m. Friday, a helicopter flew the men to Nome on Friday morning.

In Nome on Friday, both men were "with their loved ones and also in good health," the statement said.

Daugherty, the musher Lanier saw pass by, wrote in a Facebook post on Friday that he was "heartbroken" to have lost Lanier out on the trail.

"When I got to Safety, I learned Jim had not checked in. I could not believe I passed him somehow," Daugherty wrote. "I was physically sick thinking of the possibilities."

Lanier and Janssen both declined medical treatment when they got to Nome. Lanier said he was feeling "rotten" and still weak on Saturday afternoon, and Janssen said he was generally feeling well.

The two men first met in 1985 when Lanier, a retired pathologist, was working on an autopsy at the funeral home Janssen now owns.

"The situation Jim was in could have happened to anyone," Janssen said. "It was absolutely nothing to do with his age."

This was already set to be Janssen's last Iditarod race. Lanier said another Iditarod for him at this point seems unlikely.

"That's the essence of being a musher," Janssen said. "We get ourselves into these incredible situations and can get out. But in this situation, we couldn't get out."