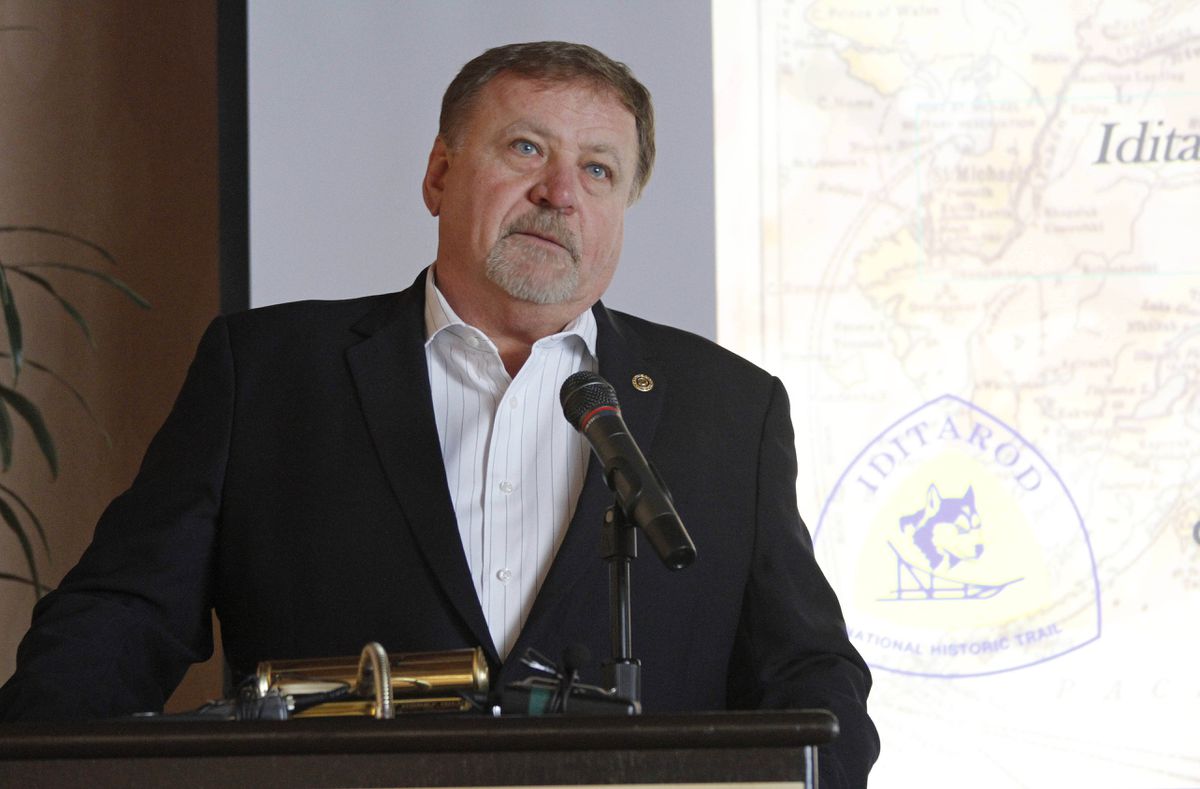 Iditarod Chief Executive Officer Stan Hooley stands during a news conference on Tuesday, Dec. 2, 2014, in Anchorage, Alaska. The Iditarod announced it was boosting the purse for the 2015 Iditarod Trail Sled Dog Race, and the $50,000 in additional funds will be split among the top five mushers to cross the finish line in Nome, Alaska. (Mark Thiessen / AP)

Iditarod Chief Executive Officer Stan Hooley stands during a news conference on Tuesday, Dec. 2, 2014, in Anchorage, Alaska. The Iditarod announced it was boosting the purse for the 2015 Iditarod Trail Sled Dog Race, and the $50,000 in additional funds will be split among the top five mushers to cross the finish line in Nome, Alaska. (Mark Thiessen / AP)

The longtime head of the Iditarod Trail Sled Dog Race has resigned to take another job, according to a statement Thursday from the race’s governing board.

Stan Hooley, 61, has worked as the chief executive of the Iditarod Trail Committee since 1993. The nonprofit stages Alaska’s annual 1,000-mile sled dog race to Nome.

Hooley’s departure is the latest in a series of shakeups to Iditarod leadership. Andy Baker stepped down in August from his position as president of the Iditarod board of directors. This year, six new people were also added to the Iditarod board.

Hooley said on Thursday that he couldn’t disclose specifics about his new job for another week or so. He described it as a business opportunity with a close friend. He’ll keep his home in the Matanuska-Susitna Borough, but anticipated spending stretches of time out of state.

“My entire working career has been in and around sports, sporting events, sponsorship work for sporting events and this opportunity will take me outside of that,” Hooley said. “It’s going to be a brand new type of opportunity for me and that’s exciting.”

Before moving to Alaska to join the Iditarod Trail Committee, Hooley worked as executive director of the Amateur Athletic Union of the United States in Indianapolis.

Hooley brought a level of professionalism to the Iditarod race organization when he joined the staff, said Mark Nordman, Iditarod race director and race marshal.

“I know the staff is going to miss him,” Nordman said. “He’s been through good times and hard times with the Iditarod.”

The Iditarod has recently faced turbulent times, including the loss of longtime sponsors, the lowering of prize winnings, mounting criticism from animal-rights groups and a drug-testing scandal involving the sled dog team of star musher Dallas Seavey in 2017. More than a year later, Iditarod officials cleared Seavey, a four-time champion, of any involvement in the drugging.

[Mushers say the Iditarod can be saved. Here’s how.]

Hooley said his resignation had nothing to do with any recent controversies.

He will continue to work with Iditarod sponsors and staff until his expected departure from the race organization in mid-January, according to Thursday’s statement from the Iditarod board of directors.

The 2019 Iditarod is less than three months away.

“Opportunity and perfect timing don’t always conveniently align, and this transition will be taking place at a less-than-ideal time," Hooley said in Thursday’s statement. "That said, I am confident the staff and our loyal and dedicated army of volunteers will successfully stage yet another Iditarod of which we will all be proud.”

Planning for the 2019 Iditarod is underway. There are 53 mushers signed up to compete in this year’s race.

Nordman spoke with the Daily News on Thursday from McGrath, where he was talking with the community about the upcoming Iditarod. Later that day, he planned to fly to Nikolai. Both McGrath and Nikolai serves as checkpoints along the race trail.

A search committee has been formed to find the next Iditarod chief executive, said Thursday’s statement from the Iditarod board.

“We’re very thankful for Stan and all he’s done. He’s done a great job,” said Wade Marrs, a current musher and president of the Iditarod Official Finishers Club, which bills itself as the "players union" for Iditarod mushers.

Mike Mills, the new president of the Iditarod Trail Committee board of directors, praised Hooley’s work.

“Stan’s dedication and contributions have been instrumental in establishing the Last Great Race on Earth as the international standard for long distance sled dog racing,” Mills said in Thursday’s statement. “He has always championed what’s best for Alaska, the Iditarod, and most importantly, the sled dogs who run this great race.”

Hooley said he hoped to see more growth in the sport of sled dog racing in the future. It’s more and more expensive each year to maintain a competitive sled dog kennel, he said, so it’s important that not only the Iditarod has economic success, but other sled dog races too.

“It’s really going to take a much broader, wider circuit of successful races for this sport to thrive,” he said. “It’s an unrealistic expectation for one race to support the mushing community.”

The 2019 Iditarod is scheduled to hold its ceremonial start in Anchorage on March 2 and official start in Willow on March 3.

[The Iditarod just made some big changes to the rules. Among them: A musher may be out of the race if a dog dies.]