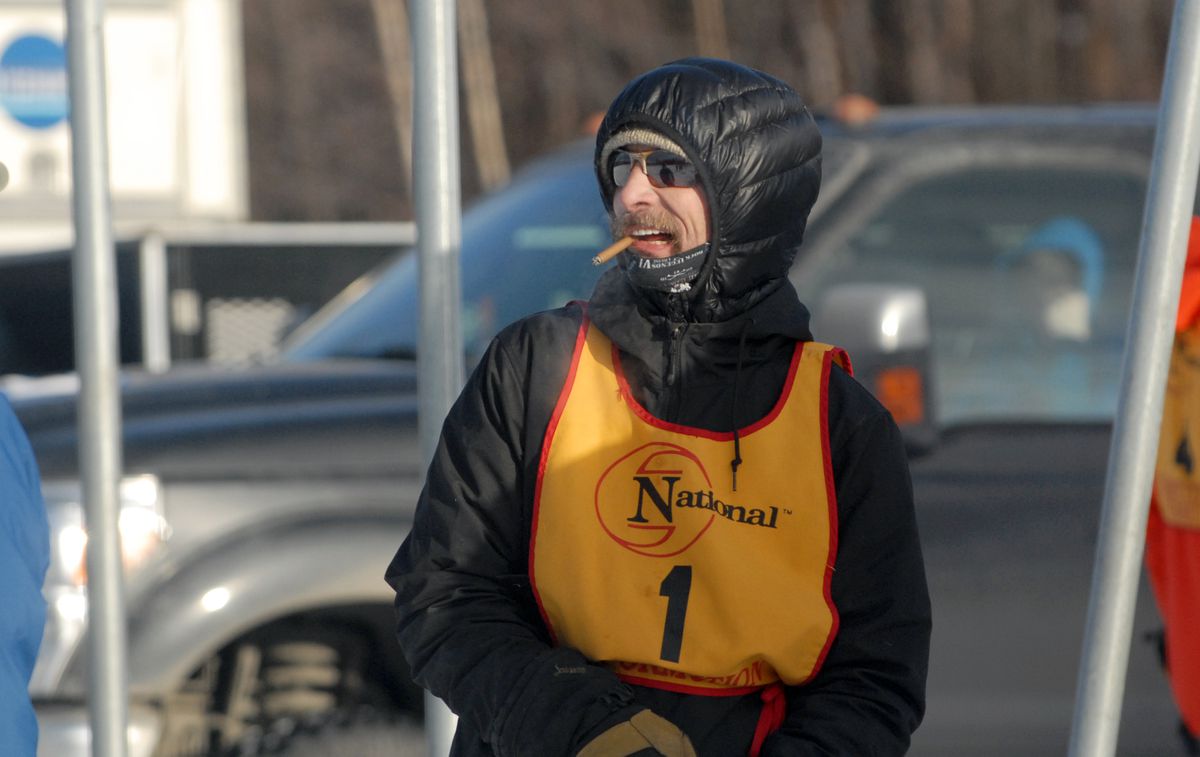 Lance Mackey will never let go of the dogsled.

The Fairbanks musher endured one of the more brutal chapters of his storied mushing career Saturday at the Eagle River Classic sprint dog races after a starting line mishap sent him down the trail face-first as he held onto his handlebars with all the grip his nine gnarled fingers could muster.

“It’s always something,” Mackey said through a pained grin as he crossed the finish line nearly an hour later in front of a handful of fans at the Chugiak Dog Mushers Association Beach Lake Trails.

Later he explained the pins that attach his skis to the sled came loose just before the start. He tried to fix the problem in the seconds before the start, but the sled went sideways just as the dogs began tearing down the trail.

“Next thing I knew I was on my face and upside down,” Mackey recalled.

Mackey clung desperately to the sled as several handlers sprinted behind in an effort to catch the struggling musher. What happened next was pure Lance.

“I’ve never seen nothing like that in my life,” recalled Ron Erhart, one of the men running to help.

Mackey was being dragged down the trail by more than a dozen sprint dogs when Erhart saw the musher roll onto his back, slam a boot into the ground and right himself in one gravity-defying motion.

“He did something with his foot and bam!” Erhart said. Just like that, Mackey was back on the runners. “Most amazing thing I’ve ever seen.”

Mackey lost his gloves in the fall — a tough break for even the healthiest of mushers on a day when temperatures were in the low teens. But the four-time Iditarod and four-time Yukon Quest champion suffers from Reynaud’s syndrome, a painful condition that limits blood flow to his hands and is exacerbated by the cold.

After spending 14 miles gripping the handlebars with either bare hands or his hands stuffed into his jacket sleeves, Mackey immediately went to a friend’s truck to try and warm up. Alternating between rubbing his hands together, holding them up to the truck’s heater vent and stuffing them into a large pair of mittens, Mackey spent a half-hour in the truck trying to dull the pain.

“They stiiiiing,” he said as he sat in the cab of the truck.

Fellow mushers stopped by to wish the legendary musher well, including one who offered him a beer — which Mackey, 48, gamely gripped through his mittens. Though clearly in distress, Mackey greeted each with his customary gruff grin and wisecracking demeanor.

When asked if Saturday’s setback might force him to rethink his plan to run this year’s Iditarod, the throat cancer survivor who had surgery on his left hand as recently as November said he plans to press on.

“At this very second I would wonder why I would,” he said. “But I’ll do what I have to do.”

Mackey finished fifth in the seven-team open class Saturday, more than 12 minutes behind first-day leader Kourosh Partow. The race has a $2,280 purse and pays $661.20 to the winner.

Though he’s well back off the lead and coming off a trying day, Mackey said he plans to be back behind the handlebars Sunday.

“I can do it on my side, apparently.”