Iditarod is ready to roll with smaller dog teams, a smaller field of mushers, and a whole lot of snow 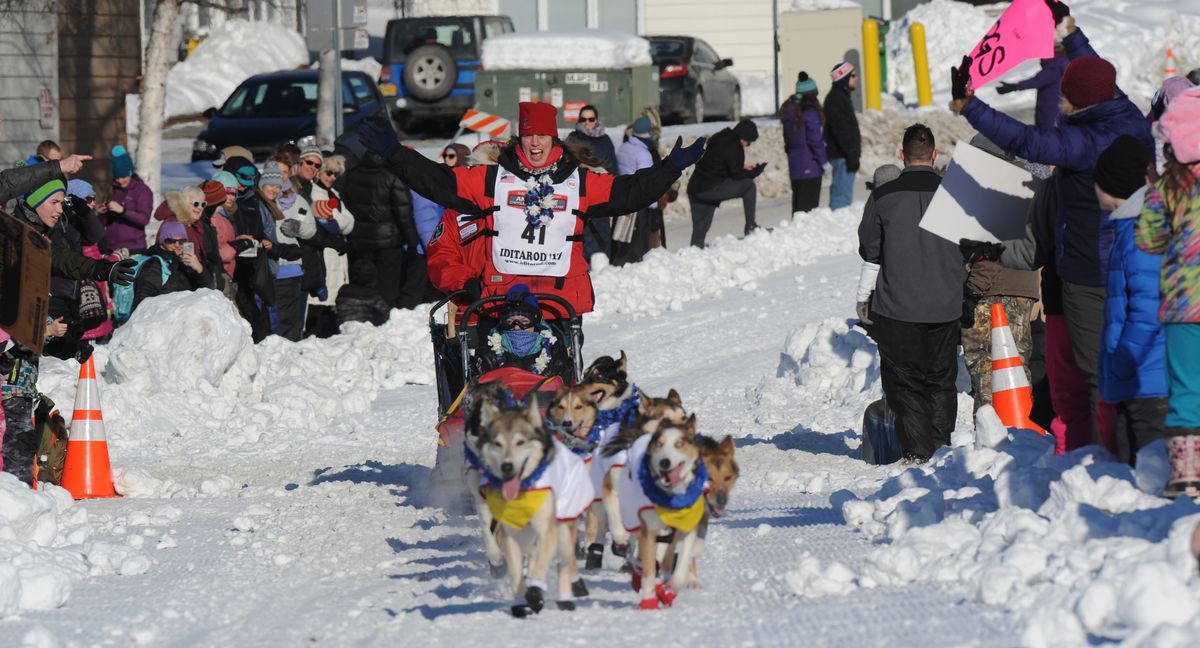 In a year’s time, the Iditarod Trail Sled Dog Race has gone from down-and-out to upward-and-onward.

Conversations about dark clouds hanging over the race have given way to talk of plentiful snow as the 47th annual race to Nome approaches.

Snowtime begins Saturday at 10 a.m. when the first sled leaves the start line at Fourth Avenue and D Street for the ceremonial start. Mushers will leave in two-minute intervals and travel a somewhat leisurely 11 miles through Anchorage to Campbell Airstrip.

Things get serious Sunday afternoon in Willow, where the race clock begins ticking when the first racer leaves Willow Lake at 2 p.m. From there it’s about 1,000 mile of remote and often unforgiving terrain to the finish line in Nome.

Not all of the troubles that plague the race are gone. Prize money for the sport’s most prestigious event is worse than stagnant – the 1992 winner earned about $1,000 more than Joar Leifseth Ulsom did last year. The field of 52 is the smallest since 1989. PETA is still protesting.

But since last year, the Iditarod has a new-look board of directors and a conflict-of-interest policy that prohibits board members from being, or being related to, active mushers. It made peace with Dallas Seavey, a four-time champ absolved of any involvement in a 2017 dog-doping scandal.

And it made some significant rule changes in the interest of dog safety and dog care. Among them: Team sizes have been reduced from a maximum of 16 dogs to a maximum of 14, and a musher is out of the race if a dog dies from anything other than unforeseeable, external forces.

“I think the race has turned a corner,” interim CEO Chas St. George said this week. “Every one of these mushers ... realizes they’re going to have to leave (the race) if one of their teammates dies. Every one of them signed off on kennel standards that are in place now.”

There is so much snow that officials won’t let mushers park their trucks on frozen Willow Lake for Sunday’s restart – officials fear the additional weight of trucks could compromise the safety of the ice.

(Why this matters to you: There will be no parking for the general public at the Willow Community Center. Officials urge spectators to take shuttles from Anchorage, Wasilla, Houston and Talkeetna.)

Though the field of mushers is small, it is mighty. Nine of last year’s top 10 finishers are back. Five past champions are racing, including defending champion Leifseth Ulsom, who sees no shortage of contenders to his throne. Everyone who placed in last year’s top 10 is a threat and so are some others, he said.

“It seems like a lot of people have been doing the job, and they’re going to go for it," he said.

As is Leifseth Ulsom. Though he had not decided on his entire lineup by Thursday afternoon, he said he’s likely to take 11 or 12 dogs from his championship team. Among them: leaders Olive and Russeren.

“I won’t have any dogs on my team under 3 years old, so that feels pretty good,” he said.

The only top-10 musher not back is fourth-place Ray Redington Jr. The biggest absentee is Seavey, who for the second straight year chose to race in Norway’s Finnmarkslopet instead of his sport’s most famous race.

Mitch Seavey, a three-time winner and Dallas’ dad, will try to keep the Seavey name near the top of the leaderboard. He’s 59 and looks leaner than ever after losing 12 pounds, and he’s racing to win.

Nic Petit, last year’s runner-up, hopes to see less scenery than he did a year ago, when a wrong turn amid blowing snow robbed him of the lead less than 200 miles from Nome. The detour added an extra eight miles to his race and ultimately cost him the victory.

Asked which musher is his biggest concern is going into the race, Petit didn’t hesitate.

Petit said he’ll run several of the same dogs he did last year, although one of his favorites – lead-dog Libby – is staying home.

“She sleeps on my bed, so I’m going to miss her,” Petit said. “... Libby is the leader who went the wrong way, so it’s probably not a bad thing (she’s staying home).”

Petit isn’t alone in putting a positive spin on things. The field of 52 is the smallest since 1989, when 49 mushers started the race, but St. George notes that it’s a quality field, and he’s right. Besides the five champions — Leifseth-Ulsom, Seavey and four-time winners Jeff King, Martin Buser and Lance Mackey — 13 of the top 15 finishers are left, and any of them could make a bid for victory.

At age 60, Buser said a fifth win — which would match the record held by Rick Swenson — “is probably not the reality.” His biggest concern is to “not hit the snooze button.”

King, 63, intends to let his dogs — including six-time finisher Ebb, a male who will turn 8 this summer — dictate his race.

“We’ll be trying to find that magic pace and routine and look for the critical signs that the team is ready to put the pedal to the metal,” he said.

King has accumulated about $949,796 in prize-money over the years and a victory could make him the Iditarod’s first million-dollar man — provided first-place pays $50,204 this year. Last year Leifseth Ulsom won $50,612.

This year’s purse is $500,000, the same as last year, St. George said. Board president Mike Mills said it’s a priority to increase the purse, and mushers are likely to agree.

[For four-time Iditarod champ Lance Mackey, there’s only one thing harder than racing: Not racing]

Mackey said the small field could be a reflection of the small purse.

“I find that there’s some people here that are going to be here no matter what. If we’re racing for a case of beer, we’re still going to sign up,” he said. "Other people are a little bit more conservative in the financial part of it maybe.

“... I’ve got 10 grand invested in this event. Just the race, from signing up and food drops. …To think that I’m going to make $1,049 potentially is hard to swallow. I’m not funded like I once was, so this 10 grand is out of my pocket. I paid the whole thing. I have sponsors like most of us do, but that doesn’t always mean it’s covering the expense. It might be goods and services. It’s still money, but it’s $4,000 just to sign up. That’s a lot.”

The purse depends on race revenues, which basically come from race sponsors. Animal-rights groups like People for the Ethical Treatment of Animals (PETA) have long targeted Iditarod sponsors in the hope of persuading them to stop giving the race money.

[When does the 2019 Iditarod start? (And 10 other questions about Alaska’s most famous sled dog race)]

For the second straight year, PETA is planning protests for the ceremonial start Saturday and the restart Sunday. It also bought anti-Iditarod ads on some People Mover buses.

“We’re just keeping the pressure on, reminding people that dogs aren’t snowmobiles, they’re individuals with wants and needs who don’t deserve to be run to death,” said Tricia Lebkuecher, a PETA campaigner from Nashville who will be here this weekend.

PETA recently took credit for Coca-Cola pulling sponsorship from the Iditarod, but St. George said that’s not true. Coca-Cola ended its sponsorship in 2015, he said, but since then the Odom Corporation, the Alaska distributor of Coke products, came on board.

That said, Mills said the race needs to build its financial stability. Longtime CEO Stan Hooley resigned last year and Mills said the board wants to hire a replacement equipped with digital and social media experience to help the race build and monetize its brand.

The Iditarod has a history of ups and downs, Mackey said, and he thinks the race will continue to survive.

“My opinion is the roots in this state and the history of our sport are here to stay," he said. "The Iditarod I don’t believe is going anywhere. It’s on a down for whatever reasons. I don’t for a minute think that it’s going to stay this way.

“I think our roots are deep and very strong here.”