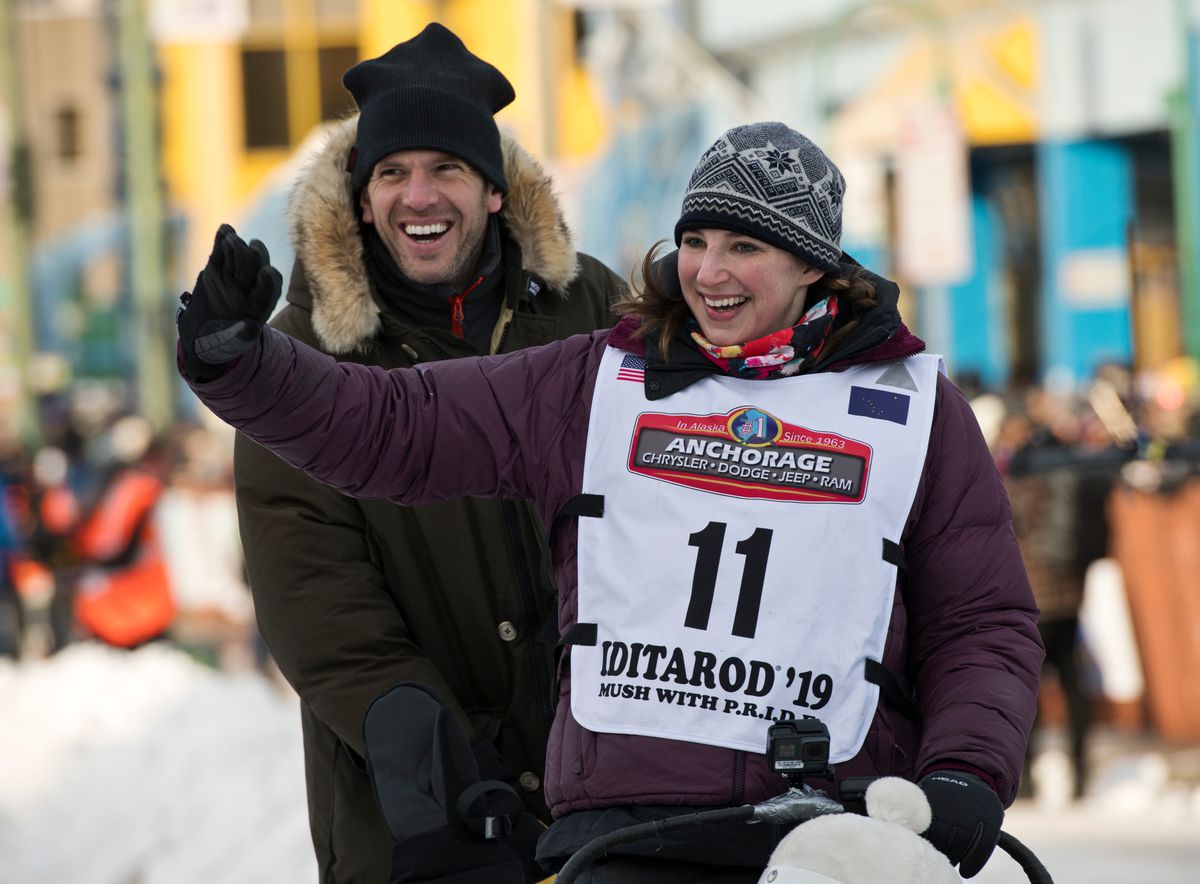 As 31-year-old Iditarod rookie Blair Braverman sees it, when she posts pictures and stories about her sled dogs on Twitter she is continuing a storytelling tradition that goes back to the days of Jack London and Robert Service, writers who captivated readers with tales of sled dogs and gold mines and solitary adventures in the far north.

As her 60,000 Twitter followers — known collectively as #uglydogs — see it, Braverman is their entrée to a world many can only dream about and a lifestyle they admire and maybe even aspire to.

That, and she’s their go-to source for photos of ridiculously cute sled dogs and stories that are even more adorable, if that’s possible.

Braverman might be one of the best things to hit the Iditarod in a while — a Lower 48 musher with an abiding love for her dogs and a gift for sharing that love on a far-reaching platform.

“We’ve gotten so many letters from people who say, ‘I don’t know much about dog sledding but I thought it was abusive until I started following you.’ I can’t tell you how many,” Braverman said.

[The beauty queen, the boss and the fighter: Meet 7 Iditarod sled dogs headed to Nome]

Braverman is an accomplished author whose 2016 memoir, “Welcome to the Goddamn Ice Cube,” received glowing reviews. She earned an MFA in creative nonfiction writing from the University of Iowa and is a regular correspondent for Outside Magazine.

By her own account, she is an accidental Twitter sensation. She never intended to turn her account into a day-by-day play-by-play of her quest to qualify for and compete in the Iditarod.

“I was resistant for a long time because I got on Twitter when my book came out because that’s what you’re supposed to do,” she said. “I was trying to be a serious artist and I felt that tweeting about dogs wouldn’t (fit the image).

“At some point I just gave up because all I wanted to talk about was the dogs. So I started telling a few stories and people cared, and all of a sudden I had a vehicle to tell people about my dogs.”

Forget about keeping up with the Kardashians. Follow Braverman on Twitter to hear the adventures of Flame, Grinch, Pepe and Blowhole — sled dogs that become fully formed characters through Braverman’s playful yet skillful touch.

Pepé will be leading the team. She led every single one of my qualifiers and I trust her instincts and wisdom completely. pic.twitter.com/0wtF2lVBDq

Braverman grew up in California and forged a connection to northern climes early in life. She spent time in Norway as a child and young adult, worked summers with sled dogs on Alaska glaciers and now lives in Wisconsin, where she and husband Quince Mountain run BraverMountain Mushing, a kennel with about two dozen dogs.

“I got into mushing because I read so much Gary Paulsen,” Braverman said of the author of the Iditarod memoir “Winterdance” and other books. “I was obsessed with his stories. It’s a sport that plays out when you’re alone in the wilderness with your dogs.

"I got involved because of the stories I read. It’s thrilling to me to pay it forward. … There is such a storytelling tradition in this sport and in Alaska, and this is a new way of doing those very old things.”

[Your support helps make our coverage of the Iditarod possible Subscribe now.]

Twitter allows Braverman to stretch her writing muscles, honor the dogs she loves and communicate instantly with readers.

Some of her threads are epic — in length and subject matter.

Her recap of last year’s Kobuk 440 in Kotzebue — a race she needed to complete in order to qualify for this year’s Iditarod — is 98 tweets long. Some consist of a single word. Some approach Twitter’s character limit. Some are illustrated by videos or photos. Viewed altogether, it’s a masterful piece of adventure writing.

So! As you know, the pups and I recently flew to Kotzebue, Alaska, to enter the @Kobuk440 race. It was gonna be the longest race of my life--but if we finished, I'd be eligible to enter the Iditarod, which is my longtime dream. pic.twitter.com/USwNrTBDBK

Braverman’s threads can make you laugh, cry and think. She turns everyday moments into magical ones, like her thread about enlisting the dogs to help clean up the yard after a windstorm.

Came home to some minor tornado wreckage, so I decided to recruit some of the pups for a clean-up party. pic.twitter.com/FWWeM5icXR

“Blair can make anything into a story,” said Mountain, a writer and musher who met Braverman when they were both at the University of Iowa. “We could lose a shovel and she’ll make it a story.”

Braverman teaches tolerance and compassion with stories about dogs like Colbert — who, Braverman realized one day while working in the kennel, is afraid of heights.

The thread ends with a gently delivered lesson: “I promised to pet Colbert on the ground every single day. And he was so happy. His secret was out, and no one thought less of him. In fact, we loved him all the more, because we knew him that much better.”

This afternoon, as usual, I did my rounds of chores in the dog yard: feeding the pups lunch, refreshing their water, and scooping poop. It’s pretty time-consuming because I do a lot of petting along the way. pic.twitter.com/hX3LtLwMvY

For awhile, many Braverman posts were hashtagged #glorygoeswest, because they told the story of what happens to a sled dog that doesn’t like to pull. In Glory’s case, the result was a move to Oregon, where she now lives with Braverman’s parents.

If you’ve followed #GloryGoesWest you know that Glory decided not to be a sled dog (she likes people more than dogs, and thinks pulling is boring), so last week she moved to the Pacific Northwest to live with my parents as a pet. pic.twitter.com/6DSphYo1gb

My husband is looking at me like I'm an alien because I am sobbing uncontrollably at the #GloryGoesWest story and I can't stop crying to explain.

“What I love is people feel connected to individual dogs,” Braverman said. Some have created Twitter accounts for their favorite BraverMountain dogs.

Braverman said she doesn’t write her Twitter threads in advance. She knows what she’s going to write about and she knows which photos and videos she’s going to use, but she crafts her stories in real time, one tweet after another.

“Which means there’s things I can’t change, typos and things,” she said. “But that’s where this energy comes from. And I get responses in real time too.

“… God bless people who are patient, because sometimes it’s taken 15 minutes to upload a photo.”

She doesn’t follow a schedule — posts happen when a dog, a photo or an incident inspire her. Most take an hour or two to complete. “It’s not like a short story you spend weeks on,” she said.

Her Twitter followers have become extended members of the family. They call themselves Ugly Dogs and many of them support Braverman via Patreon, a website that allows artists to provide exclusive content for subscribers.

Braverman’s Patreon page offers everything from a $1 a month “puppy” tier to a $500-plus a month “command leader” tier. Every donor gets access to photos not shared on Twitter, and the rewards for people at the $10-a-month “team dog” tier or higher includes trail mail — postcards or photos delivered to a post office by dog sled.

The monthly donations — many of them $10 a month — have been a game-changer, Braverman said. She wouldn’t say how much it adds up to, “but it has allowed me to run all of the qualifiers and be here.”

“It lets me spend less time pitching freelance stories and more time with the dogs,” she said. “Plus it gives me an excuse to take pictures.”

Followers have contributed words and phrases that have become part of Braverman’s Twitter vocabulary. When a litter of puppies were born last year, a follower dubbed them “the Blobs” and that’s what Braverman called them going forward.

When she gives voice to her dogs, Braverman is known as “Bler” not “Blair” because, well, dogs can’t spell.

“I got ‘Bler’ from someone else,” Braverman said. “It’s become part of the mythology of the team.”

Mountain calls Braverman’s tweets “edutainment.” And sure enough, she uses the platform to explain why dogs wear booties, what kind of food they eat.

On Wednesday, she packed her sled in an Anchorage hotel room and live-streamed the whole thing. On Friday, she announced on Twitter which dogs made her Iditarod team, and the likes poured in for every tweet.

Raise your hand if you are ready to meet the BraverMountain 2019 Iditarod team pic.twitter.com/QjiYbpBjc0

She said she knows her Twitter threads aren’t fine art, but she applies things she learned in lecture halls when she tells a story. When you read one of her threads, you know it comes from a skilled writer.

Though Braverman isn’t the only writer breaking new ground on new mediums, she is one of the first mushers to cultivate an avid Twitter audience with storytelling good enough to inspire movies or books.

“It took two years to hit 500 (followers),” Braverman said, “and then all of a sudden I’m not tweeting into a void. It feels like a community.

“It’s amazing because dog mushing is such a solitary life. You spend so much time on your runners with the dogs, so to know there is a community that knows and cares — and that cares about your stories, which is every writer’s dream — it’s cool.”

Her followers fawn over her photos, cheer her successes and console her when things get rough. In return, Braverman feels obligated to share the bad with the good.

That’s why she wrote a thread when one of her dogs, Gabby, attacked another, Boudica, during a training run. She included a photo of a badly injured Boudica.

“We don’t want people to say, ‘Oh how come this happened and you didn’t tell us about it?’ If you are transparent, people don’t expect you to be perfect,” Braverman said. “People just want to know you love your dogs and you are taking care of your dogs.”

I haven't wanted to talk about it yet, but last week I had the hardest day of dogsledding I've ever experienced. Actually, I still don't want to talk about it, but it feels important to share the bad with the good. This is a complicated, wild life we live. It's not always pretty.

For the duration of the Iditarod, Braverman’s followers will have to get their #uglydogs fix elsewhere. Race rules forbid a musher from tweeting or Facebooking during the race, interim CEO Chas St. George said.

That means a feast may await the Ugly Dogs at the end of the race. For a writer like Braverman who can spin a lively tale about cleaning up after a windstorm, the Iditarod should provide a mountain of material for a once-reluctant tweeter who has come to embrace her online audience just as it embraces her.

“My initial fear in my early 20s was that serious publishers wouldn’t want my work if I was tweeting dog pictures all days,” Braverman said. “I’ve found that serious publications are also run by people who love dogs.”