‘It’s extremely warm’: Iditarod mushers and their sled dogs rest in the heat of the day 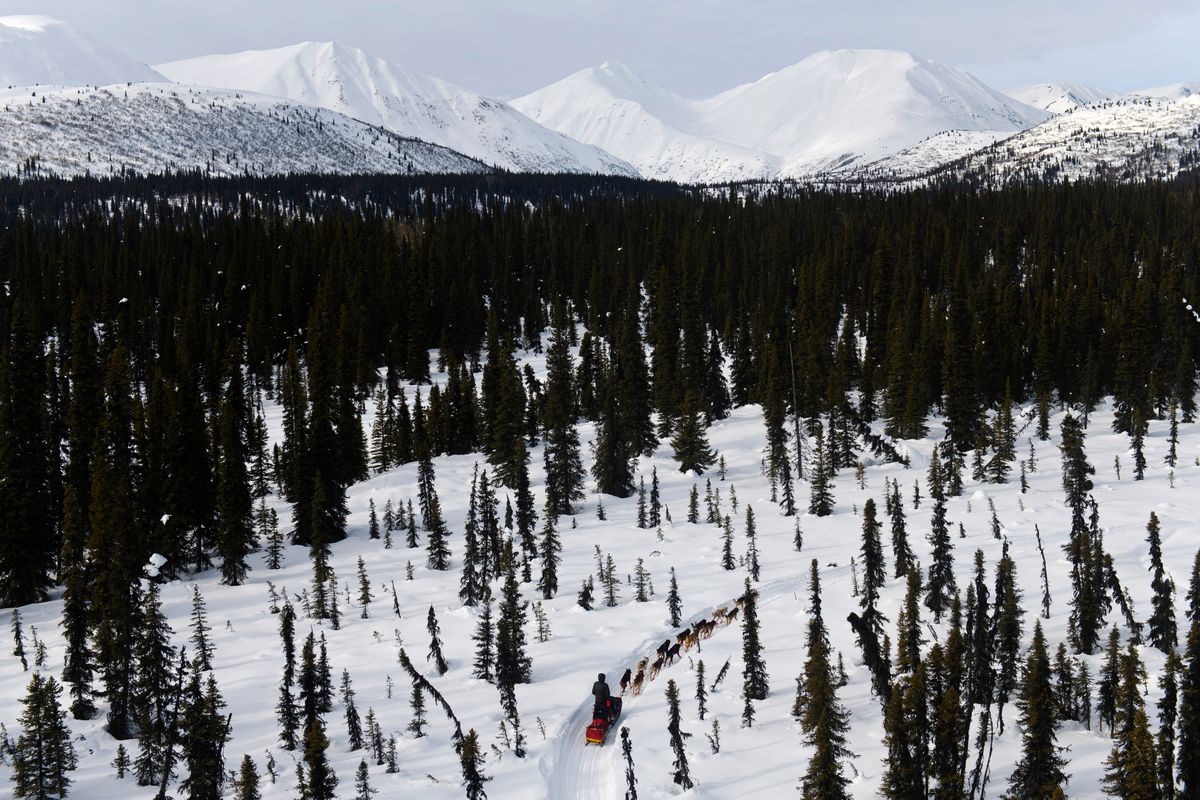 “This is like Jamaica for them,” Traska said at the checkpoint about 123 miles into the 1,000-mile Iditarod Trail Sled Dog Race.

Traska lives in Two Rivers in Interior Alaska. Her dogs prefer running in temperatures between about 0 degrees and 10 below, she said.

The warmer temperatures meant a midday rest for Traska’s sled dogs. Several other teams also took a break at the checkpoint here, based at the remote Winterlake Lodge. Once temperatures lowered, some said, they’d get back on the trail. Others kept racing.

At the Finger Lake checkpoint, mushers fed their dogs and fed themselves under clear skies and a bright sun. Mushers shrugged off their jackets. A few rested in the straw with their dogs. Some went into a yellow tent to nap. Lodge guests and other visitors walked around the teams.

“It’s our favorite time of year, really,” said Mandy Dixon, the executive chef at the lodge that her family owns. On the menu for mushers Monday: roasted beets and squash, fried eggs and either reindeer sausage or duck.

Mushers reported a snowy trail between Willow and Finger Lake. There were pockets of soft snow and bumpy trail at first, but then the snow firmed up, said Seward musher Travis Beals.

“It was kind of hard to get the dogs in a rhythm, but we’re moving down the trail,” he said. “There’s a sign down there that says 852 miles to Nome, so we’ve got plenty of time.”

Other mushers also said they were getting into the groove of a long-distance sled dog race Monday — the first full day of the Iditarod.

“I always feel a little tired right away, but I get used to it,” three-time Iditarod champion Mitch Seavey said Monday morning as he fastened booties onto the paws of his sled dog named Ghost. “Dogs are sure looking good.”

Nearby, Illinois musher Charley Bejna poured hot water into a cooler to make food for his dog team. During the six weeks leading up to the Iditarod, Bejna said, he reduces the amount of sleep he gets to about four or five hours a night to ready himself for the race.

Still, he said, he caught himself falling asleep on his sled on the way here.

Musher Jessica Klejka, a Big Lake veterinarian, said she was eating chocolate-covered coffee beans on the back of her sled early Monday to stay awake.

“I haven’t had any adventures yet,” Seavey said. “I hope to keep it that way.”

Ryan Redington, who lives in Skagway, had a peculiar sighting: A non-Iditarod dog was running on the trail between his team and Bethel musher Pete Kaiser. That dog, named Dillon, had broken free from the Winterlake Lodge and made it all the way to the Rainy Pass checkpoint, about 30 miles away.

Dillon was getting flown back to Finger Lake on Monday, according to Carl Dixon, who owns the lodge with his wife.

Meanwhile at the Rainy Pass checkpoint, more mushers and their sled dogs also rested in the afternoon sun.

Swedish musher Mats Pettersson dropped a piece of pizza in a vacuum-sealed bag into boiling water. Pettersson reported deep snow on the Happy River Steps — a notorious series of switchbacks between the checkpoints of Finger Lake and Rainy Pass. That made the run easier than usual, he said. Once, he stepped off the trail and the snow went up to his hips.

“I’ve never seen so much snow there,” he said.

Nearby, Nenana musher Jessie Holmes used a power drill to fix his broken sled. Holmes said he didn’t hit anything on the trail, part of his sled just fell apart.

But he remained positive about getting it repaired and continuing his race.

“You don’t just give up on something like this. You will fix anything you have to and you will get there. You’ve got to have that attitude,” he said. “You can’t get down on things because the dogs are going to pick up on that, you know?”

Holmes said he also felt good about his timing into Rainy Pass: He and his 14 dogs pulled in at 11:03 a.m. Monday and rested for nearly five hours, during the heat of the day.

That was important, he said, because “it’s extremely warm.”

Correction: This story has been updated to correct the spelling of the name of the loose dog from the Winterlake Lodge.