To scratch or to stay? Iditarod musher Anja Radano is stuck in a tough spot 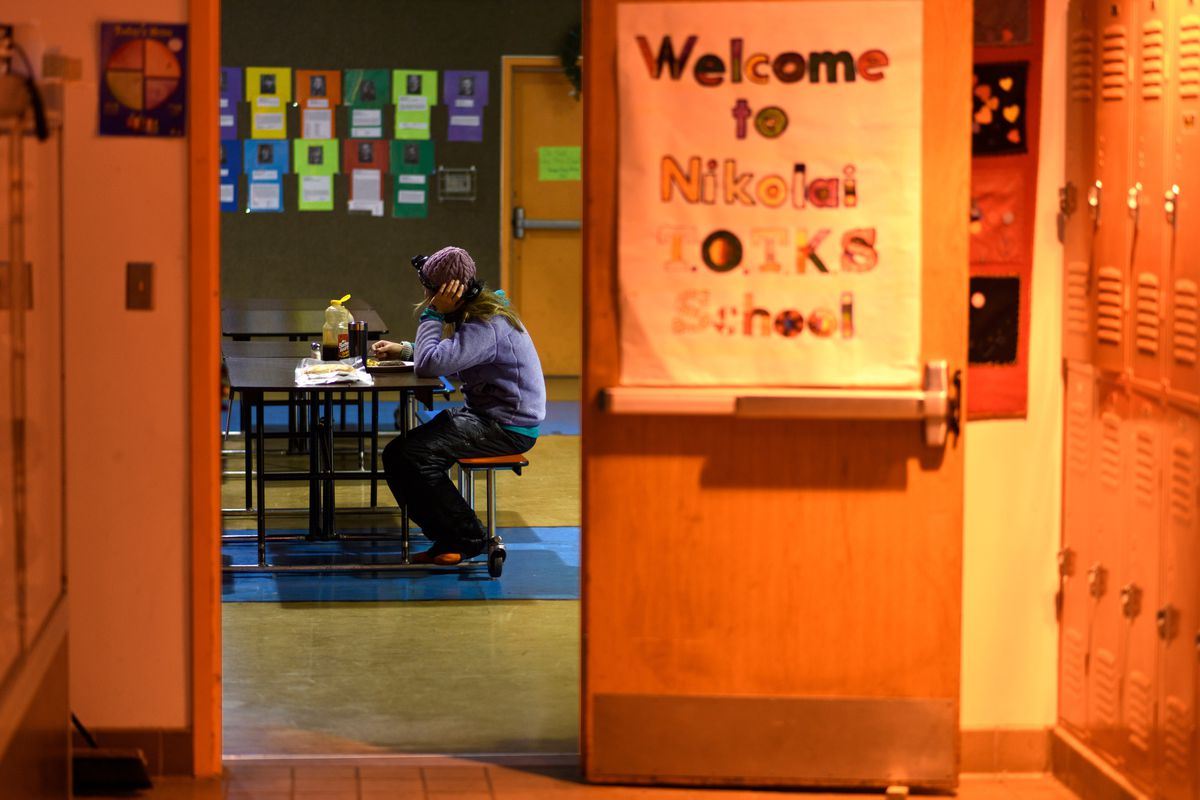 Shaynee Traska has breakfast in the Nikolai school during a stop in Nikolai. Traska said she was considering scratching from the race on March 6, 2019. (Marc Lester / ADN)

Shaynee Traska has breakfast in the Nikolai school during a stop in Nikolai. Traska said she was considering scratching from the race on March 6, 2019. (Marc Lester / ADN)

NIKOLAI — By the time musher Shaynee Traska got to the checkpoint here early Wednesday, she had already sent four of her 14 huskies home. She cried each time, she said.

Musher Anja Radano had fallen into a hole in the ice earlier in the Iditarod Trail Sled Dog Race. She hurt her ribs and her shin. Breathing was painful, she said. Her leg felt tingly and numb.

Both Traska and Radano were weighing Wednesday morning how much farther they could go down the trail. They had invested so much in this race, they said, so had their teams of supporters, but they had to think about their dogs. About 735 miles still stood between their teams and the finish line in Nome. Do they go down the trail or do they go home?

“It’s been hard for me. I’m letting down so many people,” Traska said while sitting in the multipurpose room at the school here. She started to cry.

Each year, at least a few Iditarod teams drop out of the race before the finish line, and are flown from the trail. Last year, 15 of the 67 teams that started the Iditarod didn’t make it to Nome.

Traska said she hasn’t felt completely right about this year’s race since the beginning. The Iditarod is physically challenging and also mentally tough. She had felt sick to her stomach on the trail and worried, she said. She didn’t know why. Maybe the dogs picked up on that.

“It’s a huge mental game, and I think that’s where I struggle the most,” said Traska, who has a sled dog kennel in Two Rivers.

Traska also had some dogs with muscle soreness and sent four of them home: Sanford, Julius, Hershey and Henley. She thought she might have to leave a couple more dogs behind here, and didn’t know if she wanted to try to take a small team all the way to Nome.

When things are looking up on the Iditarod, it’s incredible, she said. But the lows also feel so low.

“These dogs are truly my best friends,” she said. “Every single dog that’s in the team, I’ve raised since they were a newborn puppy.”

Radano, who lives in Talkeetna, had a different issue Wednesday morning.

She still didn’t know how bad her injuries were after falling into a hole and into open water in the Dalzell Gorge. Was it serious bruising or cracked bone?

“I’m still really sore,” Radano said while picking up her dogs’ plastic food dishes outside. A snow fell in temperatures around 30 degrees. Radano said her 13 dogs looked good, but she questioned whether she could take care of them the way she wanted.

Radano said she wanted to at least make it to McGrath, the next checkpoint about 48 miles away. She would take her mandatory 24-hour rest there and see if her pain got better — or whether it got worse.

Meanwhile, Traska had decided to end her race in Nikolai.

She scratched at 12:55 p.m. Wednesday, making the decision “out of the best interest of her race team,” said a statement from the Iditarod. She’s the first musher to call it quits on the 2019 Iditarod Trail.