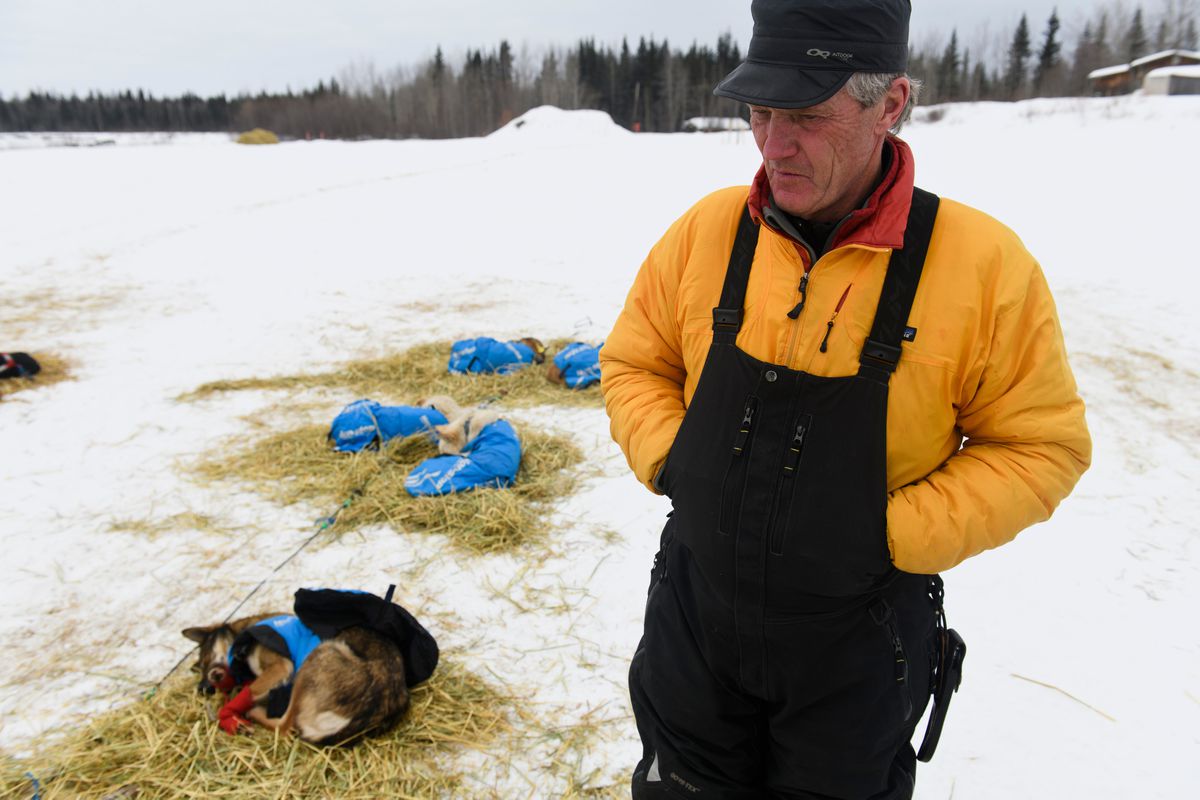 During a stop in Nikolai, Musher Linwood Fiedler talks about losing his team, then getting help recovering it earlier in the race on March 5, 2019. (Marc Lester / ADN)

During a stop in Nikolai, Musher Linwood Fiedler talks about losing his team, then getting help recovering it earlier in the race on March 5, 2019. (Marc Lester / ADN)

NIKOLAI — Iditarod musher Linwood Fiedler’s sled stopped abruptly early Tuesday when it slammed into a stump on a narrow trail. And then he lost his sled dog team.

“The carabiner broke that attaches me to the team. And off they go, 13 dogs, all just tied together running down the trail,” said Fiedler, of Willow. “You can imagine how my heart just sank.”

Fiedler tried calling, “Whoa!” to get his dog team to stop. But in a half-second, he said, they were out of sight. He grabbed his sled and started walking down the trail between the checkpoints of Rohn and Nikolai. He tried to find the team using the light from his headlamp, hoping they were around the next corner. They weren’t. Hampered by the weight of the sled, he said, he eventually decided to stop on the trail and wait.

About 30 minutes later, Swedish musher Mats Pettersson and his 14-dog team showed up.

Pettersson had left the previous checkpoint, Rohn, at 2:10 a.m. Tuesday. About 2 miles later, Pettersson said, he saw a flashing headlamp. He stopped. Fiedler told him he lost his sled dog team.

“He saved the day,” Fiedler said. “We tied my sled to the back of his sled. So his poor dog team pulled him and his sled and me and my sled.”

Pettersson said he didn’t hesitate to help. Iditarod race rules allow mushers who lost their teams to get help from another musher or a motorized vehicle to find their dogs.

About 5 miles later, Fiedler said, his headlamp picked up his dogs’ eyes. The dogs had left the trail and sat in a tangle on an icy river.

“It was like a miracle when we saw the dogs," Pettersson said. “I was really, really glad for him.”

Fiedler walked onto the river, brought his dogs back to the trail and tied them to his sled. He couldn’t believe they were all together and OK. Pettersson and Fiedler then left for the next checkpoint, Nikolai. They pulled in within about 15 minutes of each other.

Late Tuesday afternoon, the two mushers worked next to their sled dog teams in Nikolai, about 263 miles into the 1,000-mile race. Fiedler said his dogs were exhausted and one had a sore wrist, but they were otherwise healthy. He planned to take a long rest at the checkpoint.

“I imagine they probably ran full bore and we don’t ever do that,” Fiedler said.

Fiedler teared up as he recounted how Pettersson helped him on the trail.

“It’s neat about this sport that people give up their race so quickly to help others,” he said.

This is Fiedler’s 25th Iditarod start. During the 2017 Iditarod, he fell off his sled after dozing on the trail. His team went on to the next checkpoint without him. In 2016, Iditarod musher Kim Franklin lost her team between the Rohn and Nikolai checkpoints.