In Takotna, an Iditarod bond shared over coffee and pie 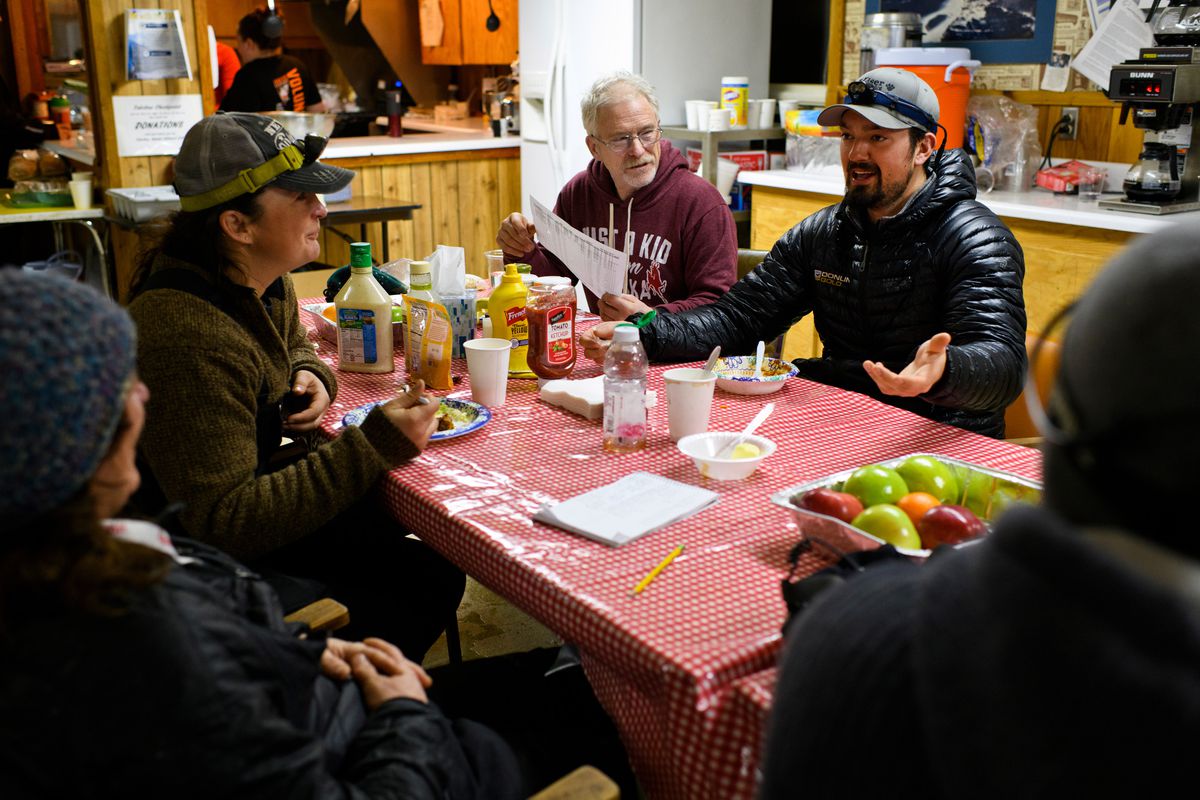 Mushers swap stories inside the Takotna community hall on March 6, 2019. From left are Michelle Phillips, Jessie Royer, Jeff King, Pete Kaiser and Richie Diehl. All but Phillips are racing in the 2019 Iditarod. (Marc Lester / ADN)

Mushers swap stories inside the Takotna community hall on March 6, 2019. From left are Michelle Phillips, Jessie Royer, Jeff King, Pete Kaiser and Richie Diehl. All but Phillips are racing in the 2019 Iditarod. (Marc Lester / ADN)

TAKOTNA — Mushers gathered around a table in the Takotna community hall might look something like a group of truckers at a truck stop. But the low-drama gathering place during the Iditarod Trail Sled Dog Race helps make the sport unlike most others.

Imagine if other sports teams gathered at halftime to swap stories about how the game was going. That’s what they do here, over coffee and pie.

“The mushing community’s a pretty small community, but a lot of these people we only see once a year on the trail. So it’s fun to sit around at get the chance to chat,” said nine-time Iditarod finisher Pete Kaiser of Bethel.

Takotna, 329 miles from the race start, isn’t halfway to Nome, but it’s the most popular place for racers to take their mandatory 24-hour rest. That means — even after dog care, sled maintenance and sleep — there’s time to unwind. On Wednesday night, Kaiser joined racers Jessie Royer, Richie Diehl and Jeff King to swap stories and talk strategy. Karin Hendrickson and Michelle Phillips, Iditarod veterans not racing this year, joined the coffee klatch.

They laughed as Kaiser told the story of a non-Iditarod dog that followed his team from Finger Lake to Rainy Pass. King told the others that he physically feels better when he’s on the trail than he does at home, where he’s been getting physical therapy for his shoulder. Royer asked Diehl about the cuts under his eye. All watched the tracker to see how fast Aliy Zirkle was making her way through the trail up ahead.

While the 24-hour rest allows for the friendly banter, it hasn’t always been in Takotna. Back in the heyday of four-time Iditarod champion Susan Butcher and five-time Iditarod winner Rick Swenson, Rohn — a checkpoint earlier in the race — was the location of choice, King said. The way he recalls it, Martin Buser was the first to take the daylong break in Nikolai, Joe Runyan pushed on to McGrath before declaring it in another year, and eventually he did the same in Takotna.

Some racers now go even farther before taking their 24, but the vast majority are drawn to Takotna, in part for its hospitality and the chance to circle up with friends who are sharing the Iditarod experience.

“It’s really cool in races to join together — that camaraderie and our connection with our animals, and then our experiences on the trail that nobody else can really understand except mushers,” said Phillips, a nine-time finisher who is volunteering to park teams here this year.

Those kinds of conversations have proven to be some of King’s most durable Iditarod memories, he said. Like the time he sat in a cabin with Mitch Seavey 15 years ago, where they caught up on each other’s family and lives off the trail. Back in 1981, he said, he joined Swenson and Butcher in a cabin in the Dalzell Gorge that doesn’t seem to exist anymore, he said.

“I felt like I was on cloud nine listening to those guys talk,” King said.

Now, a younger generation has a chance to sit around the table with King, a four-time Iditarod champ, to glean knowledge from his years of experience.

“I get that, and it’s probably some satisfaction for me to talk to people who are really interested.”