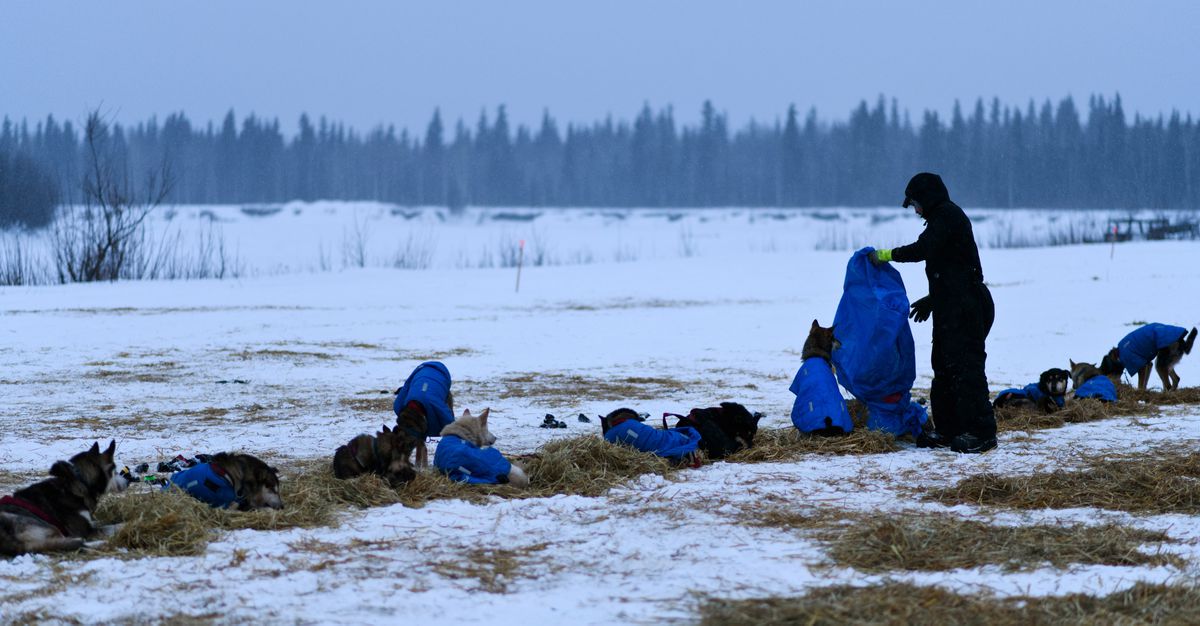 NIKOLAI — Ryan Santiago can’t recall exactly what year it was that he changed his life. But even a little sleepy and trail-worn, he can remember how it felt.

It was about a decade ago, give or take. Santiago worked a corporate sales job in Texas for a food supplier to restaurants and schools. He drummed up new clients with door-knocks and cold calls.

It wasn’t all bad. The job left him some freedom in his schedule. It allowed him to pay off his college loans, he said. But inside, it left him empty in a way that new hobbies and fun weekends couldn’t fill.

“There was just this kind of lingering feeling that there was something else,” he said. “I never felt comfortable or satisfied or content. I felt like I was just biding time.”

It took years to build up the courage to leave the comfortable confines of a predictable paycheck, Santiago said Wednesday morning as he ate a breakfast of pancakes and eggs in the Nikolai school. But with some money saved, and no family to support, he “jumped off a cliff” to see what else was out there.

“It was scary, because what do you when your bank account’s empty?” he said.

Santiago left Texas with only a few possessions, he said. His first stop was New Zealand, where he cycled for 300 miles, then lived in a car for six months. He backpacked and saw as much of the country as he could.

“I felt like I was learning more about myself and what I liked by trying new things,” he said.

When he returned to the U.S., he hopped on the Pacific Crest Trail near California’s Mount Whitney and walked north for 500 miles by himself, living off just what he could carry.

“It was very freeing,” he said. “You don’t really need anything, and you can just enjoy the world.”

Next was Nepal, for more trekking adventure. There, his savings dwindled. He had hard choices to make about what came next, and whether it would mean a return to a life like he had known in Texas.

“You’re very aware of it, and I think it’s very easy to say, ‘Oh I better stop now before I get in trouble,'” he said. “But I just kind of put the throttle down.”

“I came back and I decided ... I’m going to do something that I like to do,” Santiago said. “I don’t care how much money I make, but every day, whatever it is that I’m going to do, I’m going to enjoy doing it.”

Each move since then has brought him one click closer to the Iditarod Trail Sled Dog Race.

While taking courses for wilderness first-responder training, Santiago came across a help-wanted ad for eight-time Iditarod finisher Ed Stielstra. He ran dog sled tours for Nature’s Kennel in McMillan, Michigan. That connected him with a Skagway-based dog sled tour job.

In 2017, Danny Seavey offered him work helping to guide wealthy tourists on portions of the Iditarod Trail by dog sled. He stuck with the Seaveys’ IdidaRide operation, and by summer he was living on Punchbowl Glacier near Girdwood, giving rides for tourists who drop in by helicopter. It’s amazing there, he said, even when he’s soaked and battling strong wind. He particularly enjoys watching tourists detach from their lives down below, if only for a short time.

“The interactions and the beauty of the area, it’s not something you can have when somebody can just turn (on) your phone and cut you off,” he said.

Mitch Seavey, a three-time Iditarod winner, asked Santiago to help him train his A-team dogs in 2017. Last fall, Seavey asked him to run his team of 2-year-old dogs in the Iditarod.

At first, Santiago declined. But he agreed to run some shorter, qualifying races. Seavey isn’t pushy, he said, but he is persuasive.

And on Wednesday morning, Santiago settled in for a nap at the Iditarod’s sixth checkpoint, 263 miles down the trail with 735 more to go. Light snow fell outside.

Santiago’s good mood has been unshakable so far this race. He spoke sentimentally about the bond that he shares with his team, for which “flea-brained” is a term of endearment. He feels bittersweet satisfaction with each training success.

“I’m starting to realize that they don’t need me as much as I need them now,” he said.

It’s too soon to tell if Santiago will stick with the sled dog racing lifestyle in the long term, he said. He said he’s always hungry to experience something totally new. But it’s also true that his mushing experiences have kept him coming back for more so far.

But Santiago said he has no regrets about taking the the leap of faith he made in Texas, when he put his 9-to-5 life behind him. That’s the lesson he’s carrying down the Iditarod Trail.

“Life might go according to plan, but that’s not really that interesting,” he said. “The interesting part of life is that you end up doing something you didn’t even know existed in the first place.”