It was 37 degrees and raining in Shageluk Friday. Iditarod mushers weren’t very happy. 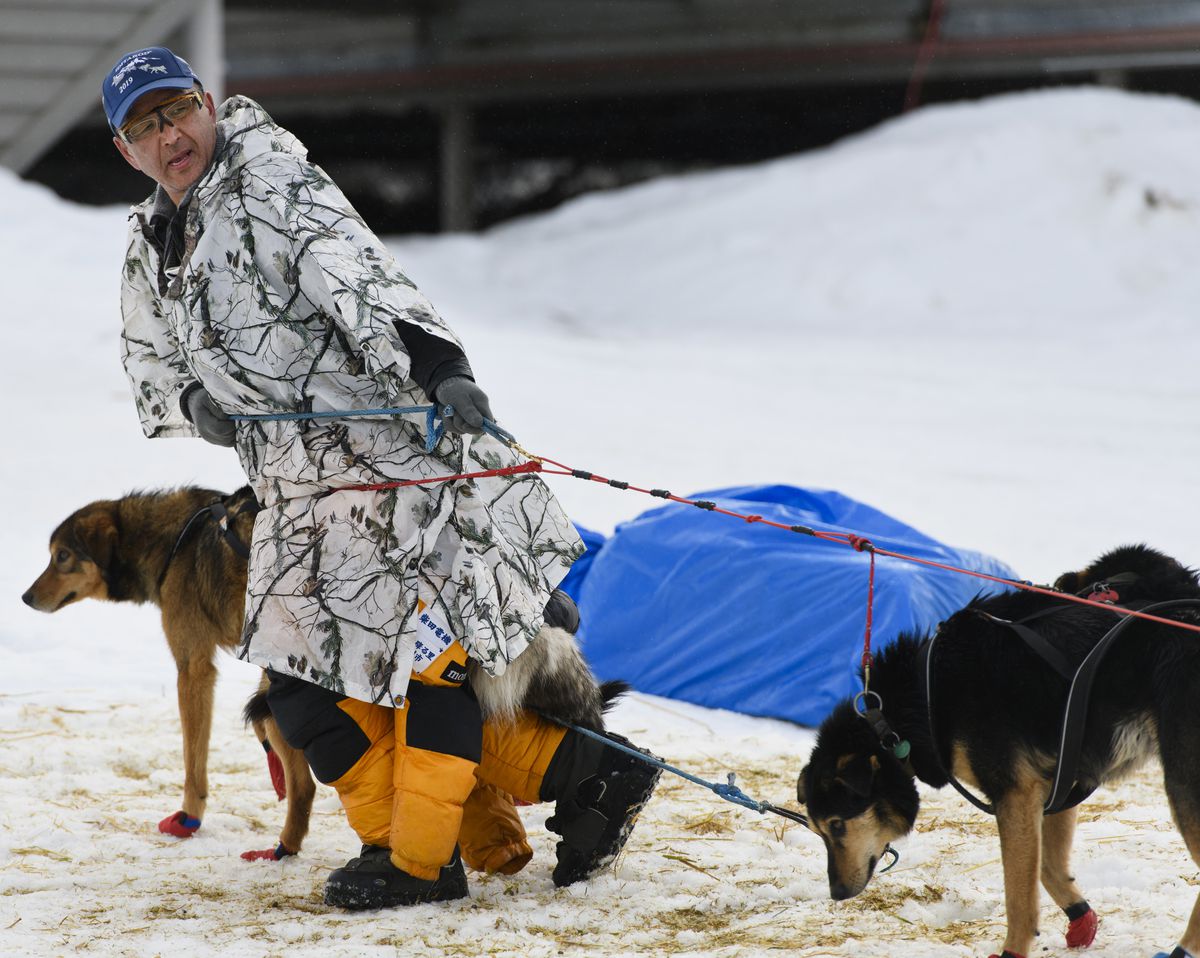 Two minutes earlier, Nenana musher Aaron Burmeister wore a rain jacket and waterproof pants as he and his 11 sled dogs left the village at mile 487 of the 1,000-mile Iditarod Trail Sled Dog Race.

It was about 37 degrees and raining on and off. Mushers weren’t very happy.

Some worried what the warm weather would mean for the trail ahead. The temperatures had also thawed some of the frozen meats they sent out to the village ahead of time to feed their dogs.

“So our meat supply is going to be dwindling to mostly kibble,” said Two Rivers musher Matt Hall.

The weather has remained relatively warm on the Iditarod Trail since the race started March 3 in Willow. Further down the trail to Nome, temperatures on Friday peaked around 34 degrees at the airport in Anvik and 32 degrees at the one in Kaltag, according to the National Weather Service.

As it drizzled outside in Shageluk, Iditarod mushers Jessie Holmes, of Nenana, and Lev Shvarts, of Willow, were inside of a one-story log building, which served as the headquarters for Iditarod volunteers. (Early Friday evening Holmes was in 13th place and Shvarts was 17th.)

A thermometer outside of the building read 40 degrees around 4 p.m. It was 37 degrees at the local airport, according to the weather service.

Some mushers, including Holmes, opted to take their mandatory 8-hour stops here.

“I should have sent out a bunch of towels,” Holmes said.

“And then you would have had wet towels and wet dogs,” Shvarts said

Seward musher Travis Beals was outside Friday afternoon sorting through the meat he had planned to feed his dogs. He opened a bag of chicken skins and smelled them. He had sent the skins out frozen, but they had turned pretty mushy.

“We’ve got to be careful what we feed out here,” Beals said. “This is somewhat concerning to me.”

Hall and Beals said thawing meat had started to become an issue at Iditarod, the previous checkpoint about 55 miles away. Mushers should have enough kibble to do without it, Hall said, but the meat provides a quicker source of energy.

“So if our main source of snacks and feedings becomes just kibble, we’ll get there but it’s going to mean even slower going,” he said.

In recent years, it’s not that unusual for Shageluk to get rain on and off throughout the winter, said mayor Chevie Roach. That wasn’t always the case. Probably 15 or 20 years ago, he said, it was not normal for it to rain in March, and there was a lot more snow.

Beals was wearing a trash bag as a rain jacket Friday. Or, more like a vest. He forgot his rain gear, he said.

He said he was trying to look on the bright side: It’s easier to take care of dog chores in warmer weather. He and his girlfriend Sarah Stokey, who’s also competing in the Iditarod, are going to Hawaii after the race ends.

“So we’re just getting prepared for the warmer temperatures by having this warm spell here,” he said. “That way when we go we don’t have a heat stroke.”