Jake Berkowitz: Breaking down Kaiser’s race to Nome, and the Iditarod’s top 10 finishers 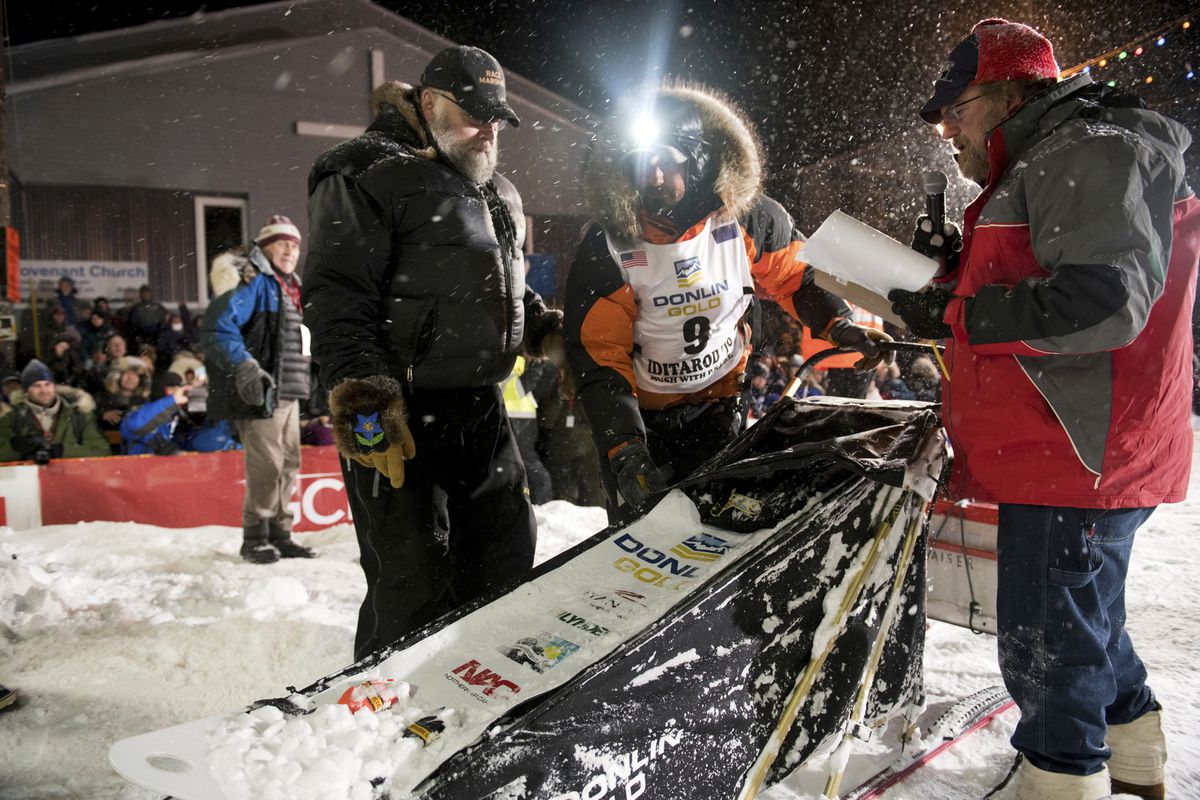 Pete Kaiser checks in at the finish line, Wednesday, March 13, 2019, in Nome after winning the Iditarod Trail Sled Dog Race. It's the first Iditarod victory for Kaiser in his 10th attempt. (Marc Lester / ADN)

Pete Kaiser checks in at the finish line, Wednesday, March 13, 2019, in Nome after winning the Iditarod Trail Sled Dog Race. It's the first Iditarod victory for Kaiser in his 10th attempt. (Marc Lester / ADN)

Pete Kaiser and his beautiful team of eight dogs, led by Lucy and Morrow, ran down Front Street in Nome early Wednesday morning, forging through a crowd buzzing with anticipation. They crossed the finish line under the burled arch at 3:39 a.m. — 9 days, 12 hours and 39 minutes after leaving the start line at Willow Lake.

Kaiser, a Bethel native and a hometown hero, is now the 2019 Iditarod champion and the first Yup’ik to win the race in its 47 years. He was quickly followed by defending champion Joar Leifseth Ulsom, a mere 12 minutes after Kaiser was crowned champ.

Kaiser and Leifseth Ulsom had been trading top spots for the majority of the race, but the battle between the two came to a head 20 miles before Unalakleet, where Kaiser, Leifseth Ulsom and Jessie Royer all rested while Nicolas Petit pushed ahead. Kaiser, who showed moments of superior speed at points on the Yukon River, showed that speed again on the Kaltag Portage. He left over an hour behind Leifseth Ulsom and Royer, but he blasted through Unalakleet and ultimately reached Shaktoolik ahead of them.

Out of Shaktoolik, Petit was still in the lead, and Kaiser and Leifseth Ulsom headed out in second and third — leaving Royer behind while she rested longer. Kaiser slowly began to separate himself from Leifseth Ulsom, quickly passing a stopped Petit on the sea ice and taking the lead. Kaiser arrived in the village of Koyuk in first place, giving himself a 60-minute lead over Ulsom.

The run across Norton Sound may well have been the run that won Kaiser the race.

Kaiser left Koyuk with an hour lead and pulled into Elim after a grueling 7.5-plus-hour run. Many past champions have blown through Elim, making the run from Koyuk to White Mountain in a single shot, but Kaiser — knowing his dog team and the upcoming trail conditions — knew he needed to rest. Leifseth Ulsom arrived 50 minutes later, shaving 10 minutes off Kaiser’s lead, but Kaiser wasted no time. He knew that Leifseth Ulsom was going to cut rest and leave right behind him, and he allowed Leifseth Ulsom to rest for only two hours compared to his nearly three-hour rest.

Leifseth Ulsom left Elim five minutes behind Kaiser, but the added rest that Kaiser was able to bank there gave him an edge. Kaiser regained the speed advantage over Leifseth Ulsom, growing his lead from five minutes to 41 minutes by the time he reached White Mountain and took his mandatory eight-hour rest.

Kaiser led out of White Mountain with a solid but not insurmountable lead. Leifseth Ulsom was held at bay by Kaiser for the first 56 miles out of White Mountain, but then the defending champion put on a last-minute surge between Safety and Nome in an effort to run down Kaiser. He covered the 22 miles into Nome a whopping 28 minutes faster, but in the end Kaiser fought him off and joined the most elite group in the sport by being the 22nd musher to be crowned race champion. Leifseth Ulsom took second place for the first time in his Iditarod career.

Royer, who ran an exceptional race from start to finish and who was once only minutes behind the lead, pulled back from her push to the top in Shaktoolik and made the decision to rest considerably longer, which was what most likely took her out of contention for the top two spots. Royer continued to push down the coast with calculated moves and, with third place solidly locked in, she began to slowly give her team extra rest down the trail. Royer pulled into Nome with 11 dogs Wednesday at 9:34 a.m., six hours behind Kaiser, in third place. It was her best finish to date.

Behind the top three, fan favorite Aliy Zirkle led the charge to Nome. Zirkle, who led the race into the halfway point at the Iditarod checkpoint and gave up valuable time doing so over a brutal trail, has slowly been climbing the ranks since then and has now notched another top-five finish. Zirkle pulled into Nome at 5:26 p.m. Wednesday with about a 6-mile lead over Travis Beals. Beals arrived in Nome in fifth place at 6:37 p.m.

Matt Hall, the 2017 Yukon Quest champion, passed Paige Drobny on the run from Safety to claim sixth place with a team of nine at 9:03 p.m.. He beat Drobny and her team of 11 dogs by six minutes, but it was still a career-best for Drobny, 25th in 2014. And she made Iditarod history, along with Royer and Zirkle, as one of three women in the top 10 — the first time that’s happened.

Ramey Smyth, who has been slowly picking off teams and making his way from the middle of the pack to the top 10. He pulled into Nome with nine dogs at 11:13 p.m. Smyth, an 11-time top-10 finisher, was eight last year as well.

Three-time champion Mitch Seavey, who had an incredibly difficult run up the coast, leapfrogged Aaron Burmeister during his run Wednesday to take ninth place at 11:25 p.m. with seven dogs. Seavey was no doubt happy to reach Nome regardless of his position, after having to rest on the sea ice outside Koyuk and then, later on, having to return to Elim and take more rest before heading down the trail. Despite all that, in true Seavey fashion, found a way into he top 10. It was his 17th top-10 showing and his eighth straight at age 59. Seavey hasn’t placed outside of the top 10 since 2003 with the exception of the 2011 race, when he cut his finger and was withdrawn from the race in Ophir.

Burmeister rounded out this year’s top 10. He took 12th last year after taking two years off from racing, and now he’s back in the Iditarod’s top 10 for the fifth time in his career. He reached Nome at 12:25 a.m. with nine dogs. At 1:40 a.m., Richie Diehl crossed the finish line in 11th place.

Forty-one mushers remain in the race. On Wednesday evening, 30 of were still just trying to make it to Nome.