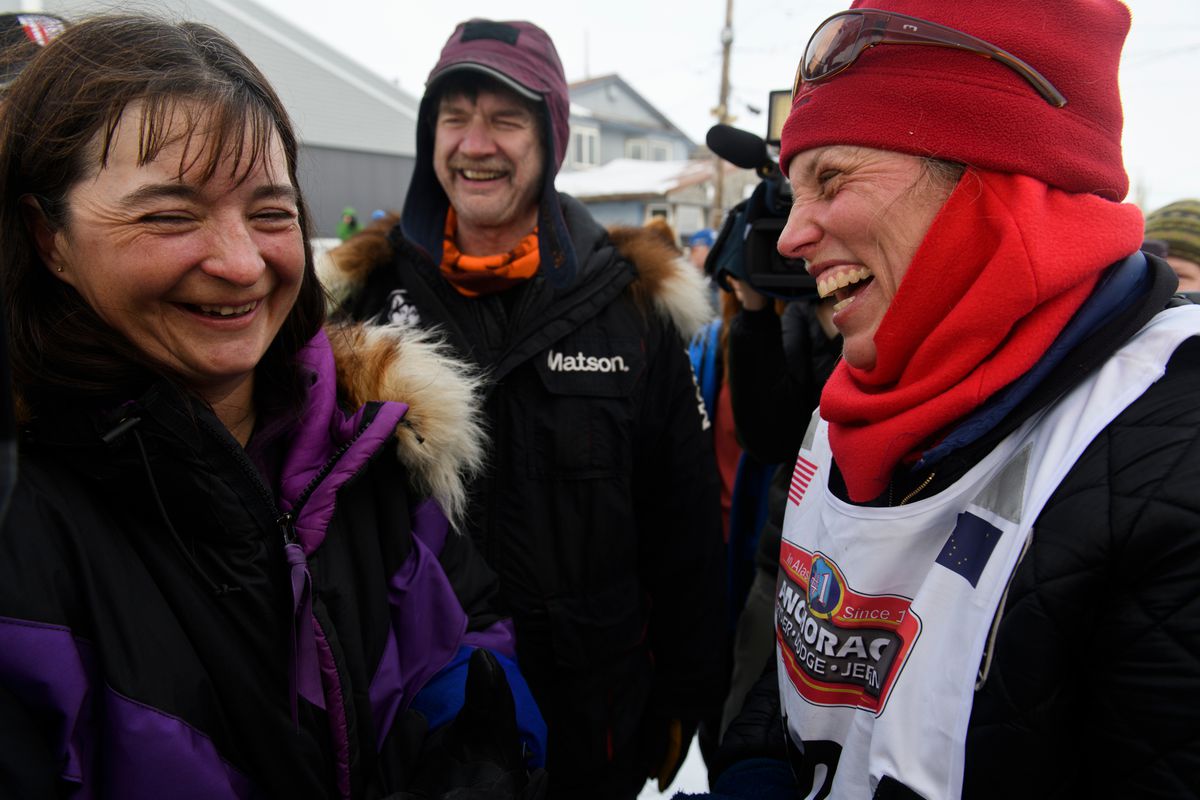 NOME — Wearing sunglasses on her way into Nome on a warm, sunny Wednesday evening, Aliy Zirkle drew a crowd when she drove her team of 11 dogs across the finish line to claimed fourth place in the Iditarod Trail Sled Dog Race.

Among those awaiting her arrival was Jessie Royer, who earlier in the day captured third place.

The two women hugged in the finish chute.

"My trail was great, thanks for putting it in for me," Zirkle told Royer.

The conversation didn’t turn to girl power, because what they did was not without precedence, nor was it a surprise.

Other Iditarods have featured two women in the top four — Susan Butcher and DeeDee Jonrowe did it at least twice — and Zirkle, 49, and Royer, 42, are among the best in the sport, one of the few in the world where gender doesn’t matter.

Royer, who splits time between Fairbanks and Montana, posted a career-best finish and her sixth top-10 result in 17 races to Nome.

Zirkle, a three-time runner-up from Two Rivers, racked up her seventh top-10 finish in 19 races.

Upon their arrivals they talked about their dogs, the weather and challenging trail conditions.

“I had to drop two really good leaders because of sore feet,” Royer said. “When their feet are wet all the time from the water and slush, just like your hands and feet, they get really sore.”

Overflow on the Yukon River made for a soggy stretch of racing, Zirkle said.

The likely problem, she said, is fungus from having wet feet all of the time.

Royer said the final 50 miles from White Mountain to Nome was slow, frustrating and difficult.

“Basically in the last 50 miles I have been in a whiteout snow globe,” she said. “I think it’s been a whiteout, like, probably 4- to 12-inch drifts for the whole last 50 miles. Just solid drifts.”

Among the 11 dogs helping her through the final push was Seal, a leader with a talent for finding the trail and sticking to the markers.

“Even when I fall asleep, he’s still right on the markers, which is good,” she said. “I woke up a few times going, ‘Oh! OK!’ But he takes you right to the markers so the sled actually bounces off of them, which wakes me up, so, good boy, we’re on the trail.”

Zirkle said that while racing through blizzard conditions, her dog Jefe provided a diversion when he got icicles on his eyelashes, the same way people do.

“Us humans, we can grab (the icicles) with our fingers,” Zirkle said. “Well, dogs, they (can’t), and sometimes they rub it on the line, but Jefe, he actually jumped down on the ground and started scooting as we were running down the trail on one side, and then he jumped up and started scooting on the other side.

“He did that repetitively and he looked back at me in between like, what do you think, boss? So at that, I laughed out loud in like, blizzard conditions where I should’ve been kinda scared. I was laughing at him.”

Zirkle said she thought Royer was going to win the race. Royer said she spent much of the race traveling with winner Pete Kaiser and runner-up Joar Leifseth Ulsom, and wound up finishing about six hours behind them, at 9:34 a.m. Zirkle finished at 5:26 p.m.

“There’s years I’ve been fourth or fifth but I’ve never been in the lead pack within sight of first and second,” Royer said. “It’s really cool and exciting.”