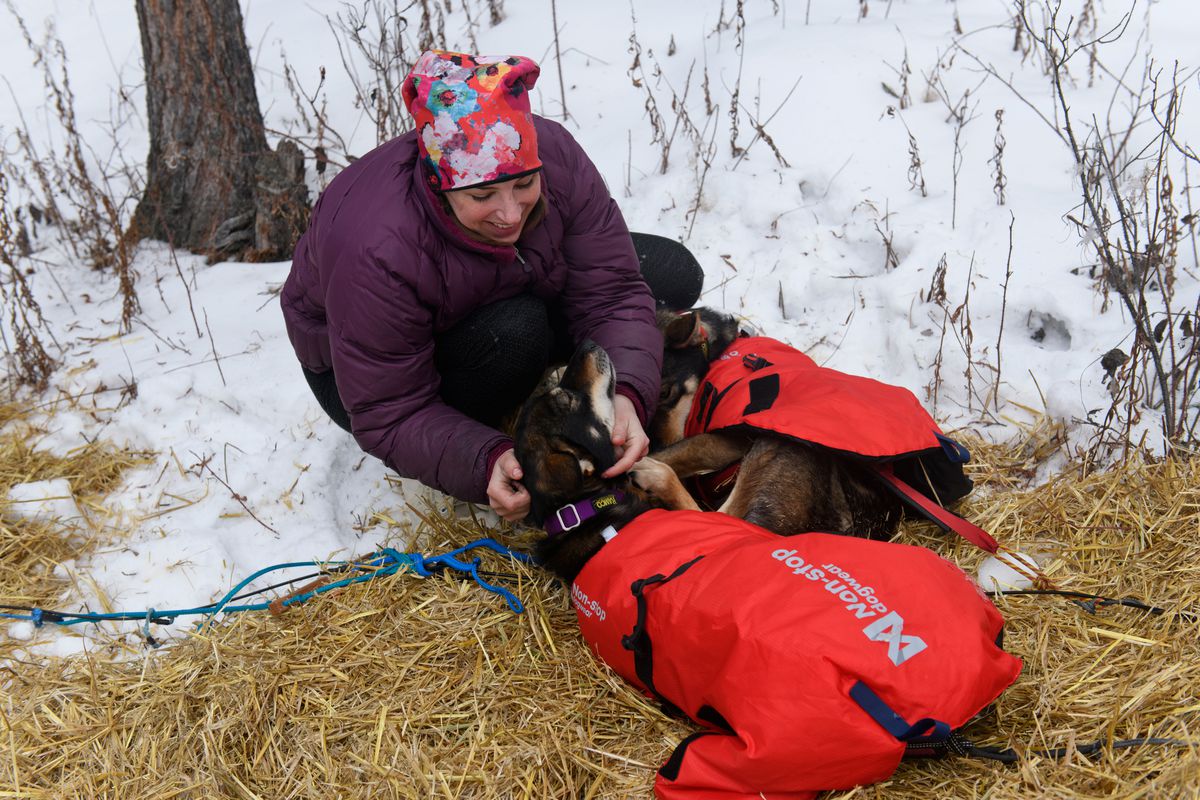 Fans of a rookie musher helped raise more than $100,000 for Alaska schools during this year’s Iditarod Trail Sled Dog Race.

The grass-roots effort was dubbed the “Igivearod.” It sprang up on March 7 on social media and quickly picked up speed. By the time the last musher crossed the Iditarod finish line Monday, the campaign had helped raise $103,601 for more than 100 school projects across the state, according to data gathered by members of the group who call themselves the Ugly Dogs (or #uglydogs on Twitter.)

“It’s kind of a miracle,” said Angela Dunton, a teacher in the remote community of Grayling. “I think they feel really connected to us because of the Iditarod and it’s not something we ever saw coming.”

The Ugly Dogs closely follow Blair Braverman, a 30-year-old musher and author who lives in Wisconsin with her husband, Quince Mountain. She has captivated people with her stories and dog photos on Twitter, where she has more than 78,000 followers from across the globe.

Raise your hand if you are ready to meet the BraverMountain 2019 Iditarod team pic.twitter.com/QjiYbpBjc0

“A lot of us are really into the sport, but some people are just into the pictures of the dogs,” Shannon Cole, a California writer who follows Braverman, said about the Ugly Dogs.

Braverman finished her first Iditarod on Sunday in 36th place. But while she was on the trail for more than 13 days before that, her normally busy Twitter feed went silent. Some of the Ugly Dogs got a little bored, Cole said. So they harnessed the power of the internet and began raising money for Alaska schools.

“All of this was done out of the spirit of what Blair has shown us the sport is,” Cole said. “It’s about caring for the people along the trail. It’s about doing what you can. It’s about looking out for the person ahead of you and behind you.”

It started in Nikolai, an Interior Alaska village of about 70 people at Mile 263 of the Iditarod Trail.

Anchorage television station KTVA ran a story about Nikolai students raising money for a fourth-grade school trip. Cole read it, she said, and then reached out to the school to see how she and others could contribute.

The school met its goal to send its five fourth-grade students to Anchorage and Seward. Wiggins said she’s still in shock.

“All of a sudden these strangers who we’ve never met were supporting our kids,” she said. “Hopefully this will inspire the kids to help others when they get the chance.”

Soon, the Ugly Dogs started an online spreadsheet, tracking all of the Alaska school projects they could find on the crowdfunding websites DonorsChoose and GoFundMe. They circulated the links to the fundraising pages, connecting donors with the funding requests that teachers had posted. The teachers were from schools on the Iditarod Trail and off of it.

The money poured in.

As Victoria Hardwick carried the Red Lantern into Nome, the first ever #Igivearod campaign came to an end at 🚨$103,601🚨 in donations for Alaska schools. This group of random strangers on the internet who like to call ourselves #uglydogs have made #Igivearod2019 hard to top! pic.twitter.com/7VKaoNc4iK

For Takotna students, money was donated for a school trip and new chairs. Grayling students received funding for iPads, the tools to create a hydroponic garden and more. In the Matanuska-Susitna Borough, funding went toward weights, mats and jump ropes for the Houston High School gym. One Anchorage school received funding for spin bikes and a school library got a virtual reality kit.

Donations funded dozens of other projects. Many people tagged their donations with #uglydogs and #igivearod. Some gave $11 because that was Braverman’s number in this year’s Iditarod. Non-Ugly Dogs donated too. Anyone can go to the websites and contribute.

From March 7 to March 18 (the final day of the Iditarod), 128 Alaska classroom projects were funded on DonorsChoose, said Chris Pearsall, the vice president of brand and communications for the crowdfunding website. That’s compared to 33 projects during that same period in 2018.

[With the final Iditarod musher into Nome, here are 8 takeaways from this year’s race]

“Needless to say, we’re so grateful for the generosity of this spontaneous group of Iditarod fans who came together to support Alaska schools,” he said.

Those numbers don’t include the additional projects and school trips funded through the GoFundMe website.

“Receiving all this support from these people told me there are people out there who truly care about teachers and truly understand that we don’t have everything we need to help our students,” said Sarah Yates, another teacher in Grayling.

For some teachers, crowdfunding has increasingly become their go-to way to fill funding gaps in the state’s cash-strapped school districts. It’s also a way to pay for enrichment activities that there isn’t funding for, some teachers said. The potential for budget reductions next school year is looming, too, with Gov. Mike Dunleavy proposing deep funding cuts to education.

Braverman said she had no idea about the Ugly Dogs’ fundraising efforts until she reached Anvik on March 10, about 512 miles into the race. A volunteer told her the Ugly Dogs had raised roughly $40,000 for Alaska schools by that point.

“My jaw just dropped,” Braverman said in an interview Tuesday. “I had just done this incredibly hard run and I was about to keep going and I just happy cried all the way to the next checkpoint.”

At that next checkpoint, in Grayling, Dunton was waiting. The teacher said she ran over to Braverman and hugged her.

About the Igivearod, she said: "It’s pretty darn wonderful.”

A few hundred miles into the race, teachers started hugging me in villages. “We haven’t been able to buy new glue sticks in six months, but now my classroom will have a garden and a project to get girls into engineering!” one woman told me. I happy cried all the way up the Yukon. https://t.co/q3jggsswpF