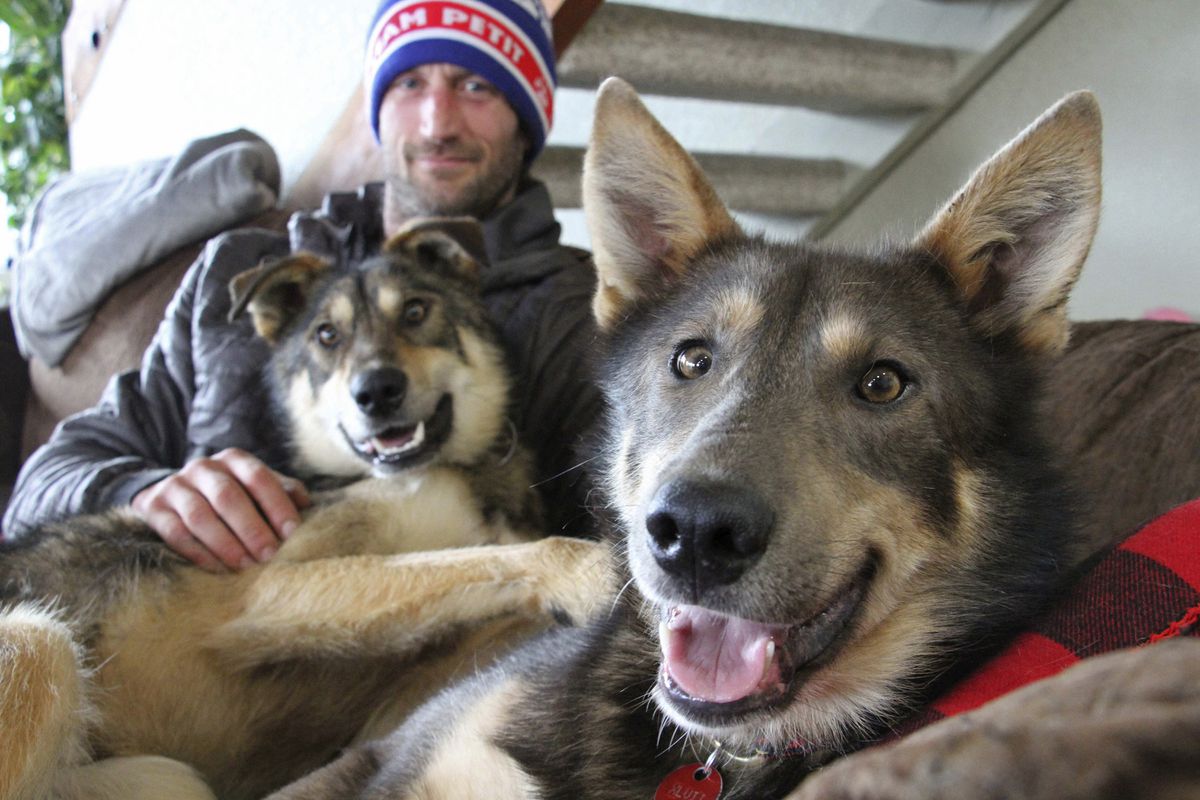 This Wednesday, March 20, 2019, photo shows Iditarod musher Nicolas Petit posing with two of his dogs in Anchorage. Petit was in the lead of this year's race but his dog team quit running after he yelled at Joey, right, to stop picking on Danny, left. Petit says that isn't the reason the dogs quit running; instead, they quit about the same point the team got lost in a blizzard in the 2018 race. (AP Photo/Mark Thiessen)

This Wednesday, March 20, 2019, photo shows Iditarod musher Nicolas Petit posing with two of his dogs in Anchorage. Petit was in the lead of this year's race but his dog team quit running after he yelled at Joey, right, to stop picking on Danny, left. Petit says that isn't the reason the dogs quit running; instead, they quit about the same point the team got lost in a blizzard in the 2018 race. (AP Photo/Mark Thiessen)

The Iditarod musher who was hours ahead in the race when his dogs refused to keep running dismissed critics who say he ran them too hard. He chalked it up to a bad memory that spooked them.

The team stopped last week after Frenchman Nicolas Petit, who lives in Girdwood, yelled at a dog that was bullying another, but they “did not slow down like a tired team would,” he said.

It came a year after they got lost in a blizzard near the same spot along the Bering Sea coast — close to the finish line of the 1,000-mile Iditarod Trail Sled Dog Race that takes mushers across mountain ranges and wind-swept ice.

"I wouldn't say it's a curse for me, I just had a bad time last year and lingering effects of the bad time this year," Petit said.

[Our favorite photos from the 2019 Iditarod]

It was pure coincidence that it happened at the same point in the race, he said.

"They remember that we didn't have a fun run," going through the snow the wrong way, Petit said Wednesday, sprawling out on a friend's sofa in Anchorage.

Dogs from his team piled on top of him and licked his face. Also nosing their way in for attention were Joee, who was the bully on the trail, and Danny, the younger male dog who was bullied.

When Petit withdrew from the race this year, he said it was a "head thing" for the dogs.

[With the final Iditarod musher into Nome, here are 8 takeaways from this year’s race]

Then the blowback began — in press releases, on blogs and on social media. The most vocal critic of the race, People for the Ethical Treatment of Animals, said it wasn’t the dogs that needed their heads examined, it was anyone who supports “the merciless race.”

Others speculated that Petit overexerted the dogs, they were mistreated or were mentally unfit to run. Petit denies it all.

"This isn't any type of a reason to get rid of what I consider my children — the dogs I raised," Petit said. "No, I won't get rid of them. They are the most important thing in my life."

He also said he’s “stopping plenty” along the route, preferring to rest outside checkpoints and along the trail when possible, where it’s quieter and the dogs get more sleep.

Libby Riddles, the first woman to win the Iditarod in 1985, said the sport requires a fine balance between being competitive and keeping the dogs happy — something she said Petit excels at.

"People have this idea that you can force these dogs" to the finish line, Riddles said last week. "It's not like that at all."

In 2018, Petit rested his dogs at a cabin between checkpoints before the disastrous run in the blizzard. He planned to stay at the cabin again this year but leave it with a well-rested team.

[An Iditarod rookie thought his dog was tired heading into Nome. It died 2 days later.]

Within a mile of the cabin, the dog dustup happened. Joee, a 2-year-old and the only non-neutered male on the team, was behind Danny, a 16-month-old pup. Every time Danny slowed down, Joee would pick on him.

"I raise my voice a little bit and they are all like, 'Oh, boy, that's not normal,'" Petit said. "I try to be as calming and collected with my dogs as possible all the time, so they heard an upset daddy."

The team refused to keep going. He tried walking ahead of them to see if they would follow and putting different dogs in the lead. Other mushers came by, but even that didn't rouse the dogs.

They finally got the mile to the cabin. Fourteen hours after the dogs stopped, they took off but didn't make it far. Petit took them back and pushed the panic button on his GPS unit, effectively withdrawing from the race.

A snowmobile brought food and then carted the dogs off the trail.

Petit still expects to compete in next year's Iditarod. He's said he's planning to take his dogs next week to the problem area — the Bering Sea coast — to show them the fun they can have on that stretch of the trail.

“And that it’s not always blowing, and we don’t always get lost, and it can be a very positive experience as opposed to the last two years,” he said.