‘Like a road trip for us': This father and son just traveled 3,750 miles around Alaska with a sled dog team 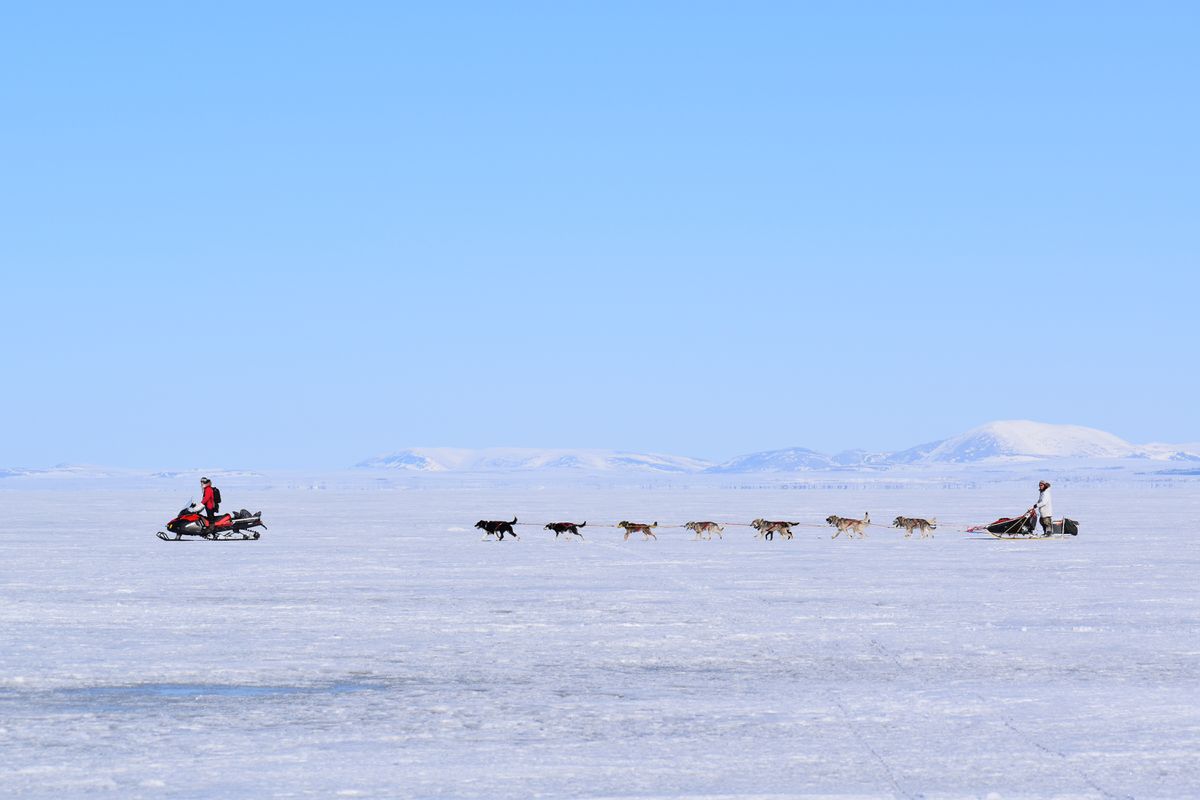 Martin Apayauq Reitan drives a snowmachine as his father Ketil Reitan drives his dog team before the start of the 2019 Kobuk 440 race start in Kotzebue. (Photo by Shady Grove Oliver)

Martin Apayauq Reitan drives a snowmachine as his father Ketil Reitan drives his dog team before the start of the 2019 Kobuk 440 race start in Kotzebue. (Photo by Shady Grove Oliver)

In November, Ketil Reitan and his 21-year-old son, Martin Apayauq Reitan, left their northern Alaska home. One drove a snowmachine pulling two sleds loaded with supplies. The other stood on two sled runners behind a team of 14 dogs.

Five months and about 3,750 miles later, the father and son returned home to Kaktovik last week.

“This is like a road trip for us,” said Ketil, a long-time Norwegian musher. “It feels like an annual migration now.”

This was the fourth year in a row Ketil, 58, has led one of his two sons on a long-distance journey from the Arctic to the Interior to Southcentral to the northwestern coast and home again. Ketil said it’s a great way to travel and spend time together. It’s also a way for his sons to learn more about their heritage, he said. Their mother, Evelyn Anguyak, is Inupiaq.

Along the way this year, Ketil and Apayauq visited with family and friends. They shared muktuk with those they met. They picked their way through white-out conditions. They went out to a whaling camp and paddled in an umiak, an open boat often made of animal hide stretched over a wooden frame.

They also took some serious detours.

Between the two of them, they completed three of sled dog racing’s most grueling events. Apayauq ran two roughly 1,000-mile races, finishing his first Yukon Quest in February and his first Iditarod Trail Sled Dog Race in March. In April, Ketil raced his first Kobuk 440 in Kotzebue.

“It was a once-in-a-lifetime opportunity,” Apayauq said about his back-to-back races. “I really, really had a great time.”

Apayauq started mushing at age 4 with a tiny sled and one dog.

Ketil has been mushing every winter for the past 35 years, he said.

He made his first long-distance mushing trip in Alaska in 1987 after traveling to the state from Norway to work on his master’s thesis on whaling. Ketil and a friend traveled by dog team from Ambler, about 140 miles northeast of Kotzebue, to Canada. When they passed through Kaktovik, Ketil met Evelyn Anguyak. They later married and had two children.

For years after that, the family of four split their time between Kaktovik and Norway, where they had a dog mushing tourism business.

In 2010, the Reitans started another business, this one in Kaktovik. They take people out by boat to photograph polar bears. Apayauq and his older brother, 23-year-old Vebjørn Aishana, are boat captains and part-owners of the business.

The polar-bear tourism season runs from late August to mid-October, Ketil said, and the business allows him to get out with the sled dogs the rest of the year. The family has a small kennel of 14 dogs in Kaktovik, so when Ketil goes on long trips, all of the dogs join, he said. Once his sons finished high school, they joined too.

“It’s hard to find somebody that has the time and resources to spend the whole winter dog mushing,” Ketil said. “So I feel lucky that I have two buddies that are my sons, too, and we get to travel together and get to know each other.”

Our welcome commitee in Atqasuk! pic.twitter.com/BpGs8rTamh

Over the past four years, Apayauq and his older brother have rotated who goes with their dad on the winter trip.

Apayauq said his dad has taught him just about everything he knows about sled dogs and outdoor travel. Ketil is a seven-time Iditarod finisher who has competed in several other long-distance races including the Quest and Norway’s Finnmarkslopet.

“We have a good time when we’re traveling around,” Apayauq said. “Good fun and it’s good to have someone I can ask questions.”

They change the route a bit each year.

This winter, Ketil and Apayauq took the dog team and snowmachine on the sea ice from Kaktovik to Prudhoe Bay. Then they loaded up their gear and dogs into a truck and drove to Two Rivers, east of the city of Fairbanks. They stayed in Two Rivers to train and prepare for the upcoming races before driving to Whitehorse, Yukon, for the start of the Quest.

Then, Apayauq faced the single most challenging moment of the trip.

During the Quest, Apayauq said, he and his dog team team battled strong winds on one of the highest points of the race, Rosebud Summit. The conditions made spotting the trail nearly impossible, he said. He’d walk in front of his dogs, moving side to side to find the hard-packed trail, helping to guide the team forward in blowing snow.

Exhausted, Apayauq eventually decided to pull off the trail to give the dogs and himself a break. Meanwhile, Ketil watched the race play out on his computer screen, following the GPS tracker.

“Of course I was a little bit worried about him,” Ketil said, “but I know that he’s a very skillful person and he’s been out in blizzards since he was very young.”

Apayauq said he considered dropping out of the race in the storm, but after some rest, he pressed on. He later crossed the Fairbanks finish line in 14th place, winning rookie of the year, as his dad cheered him on.

The next month, Apayauq and his dog team arrived at the Iditarod finish line in Nome in 28th place, met by his dad and his mom.

After the Iditarod, the father and son started what they call the “camping trip.”

They traveled up the coast by snowmachine and dog team, guided by GPS and stopping along the way in villages, some that had not seen a dog team in a long time, Ketil said.

They reunited with family, and met new people too, Ketil said.

It’s not a tiring trip, Apayauq said. They spend time resting along the way, he said, sometimes days at a time.

Over the past four years, Ketil and one of his sons have made it to every Inupiat village in Alaska, Ketil said. That’s important to him. He wants them to meet people, eat traditional food and learn different skills.

“I can’t think of a better way to kind of enrich their Inupiaq background and inheritance,” Ketil said.

Ketil said he’s grateful for the time with his sons.

Leaving Utqiaģvik today! Behind us is Geoff Carroll, our host and owner of the last dogteam in Utqiaģvik! He's going for a short run following us. Apok and Wiseman in lead. pic.twitter.com/ACRGg9RKgK

Next year, they’ll all likely be pursuing different interests.

Ketil’s older son is in school in Norway learning how to build traditional Norwegian boats. Apayauq has applied for photography school. Ketil is planning to write a book about his expeditions.

But for now, Ketil and Apayauq are adjusting to life back at home, and also to life without their dog team. That’s the toughest part, Apayauq said. The dogs went to Canada for summer tours.

“It’s a little bit of a shock to come back to normal life again,” Ketil said.

“But we are used to having different seasons with different activities," he said. "It’s a little bit sad to be finished with one season, but we always look forward to the next season too.”

Made it home. Strange to not have my dogs. I miss my dogs. pic.twitter.com/wHTGj2umgT