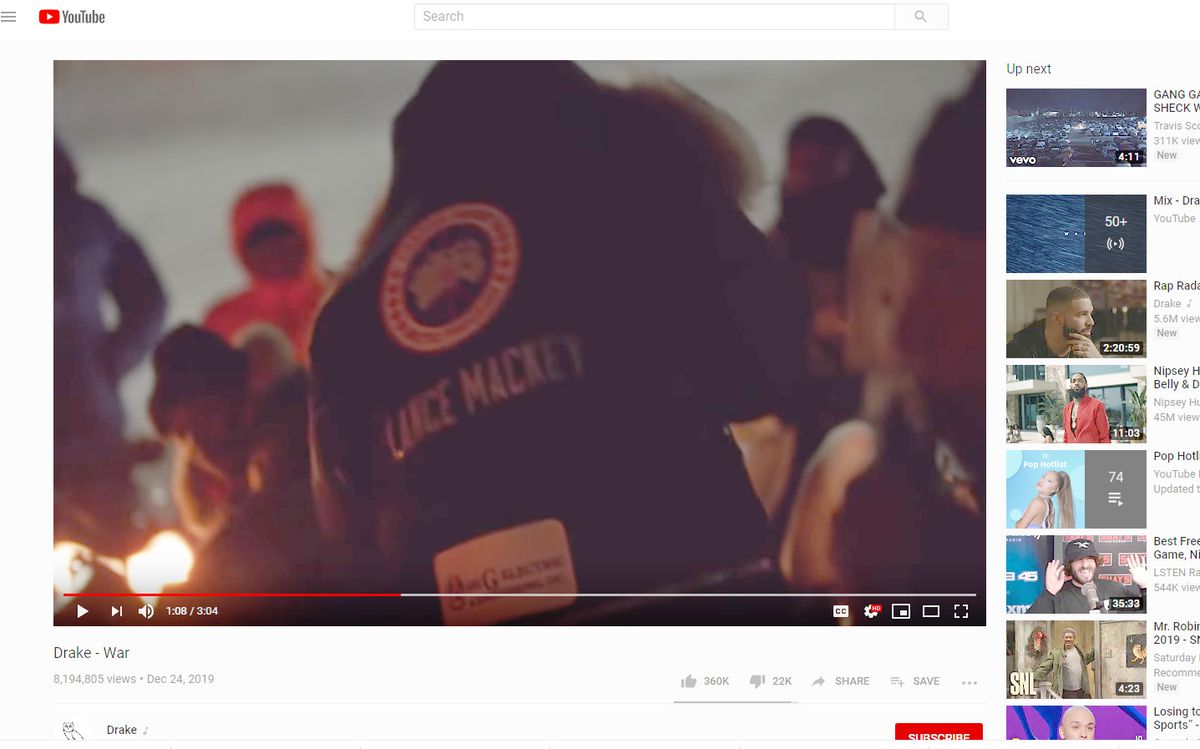 A screengrab of Drake's video for "War," in which he wears a Lance Mackey-edition Canada Goose parka. (Screengrab via YouTube)

A screengrab of Drake's video for "War," in which he wears a Lance Mackey-edition Canada Goose parka. (Screengrab via YouTube)

The light is dim, but the name is recognizable, especially to Alaskans. Drake, one of hip-hop’s biggest stars, is rocking a Lance Mackey-emblazoned parka in his new music video.

The winter-themed video for “War” features Drake and friends in nighttime scenes as they ride on snowmachines and down ski slopes. For part of the video, which has drawn more than 8 million views on YouTube since it was posted Dec. 24, Drake wears a limited-edition Canada Goose parka. The lettering of Mackey’s name is clearly visible in a fleeting moment when the rapper turns his back to the camera.

For Mackey, who lives in Fairbanks, the jacket’s pop culture moment came as a surprise. Mackey said he found out about it while making calls to family members on Christmas morning. He said his nieces were excited about it.

Mackey said he recognized the rapper’s name but was largely unfamiliar with his music. His partner Jenne Smith called up the video on YouTube.

“I couldn’t help but to get kind of a kick out of it and then learn a little bit more about the guy,” Mackey said of the Toronto rapper.

Smith shared screenshots from the video on the kennel’s Instagram Stories.

Mackey, of course, was big time before, at least in the realm of dog mushing. He won the Iditarod four consecutive years starting in 2007. For two years, he won the Iditarod and the Yukon Quest back to back. He’s a cancer survivor, inductee to the Alaska Sports Hall of Fame and the subject of a feature-length documentary film released in 2015.

But Mackey, who has long been celebrated for his toughness, hasn’t exactly been vaunted for his fashion sense. He sometimes jokes about wearing his cleanest dirty clothes.

In the video, Drake carries Mackey’s name into his large sphere of influence. Drake is a bona fide music superstar. He’s been nominated for 44 Grammy Awards and has won four. The Recording Industry Association of America ranks Drake first on its list of top artists by digital sales. The musician has 62 million Instagram followers, 38 million Twitter followers and 19 million YouTube subscribers.

“For me, I’m just a guy on the hill with a bunch of dogs. Big deal, you know? But apparently this guy’s a pretty big deal,” Mackey said.

Mackey doesn’t know how the parka got to Drake. A Canada Goose representative said the company was unable to offer a spokesperson when asked about the video Friday. Canada Goose sponsors Mackey and has collaborated with October’s Very Own, Drake’s streetwear label.

“We want to know if it was random or if it was actually something (Drake) had sought out,” Mackey said.

Drake aside, the parka holds some special memories for Mackey. The original version was the one he wore during the 2009 Iditarod, the year he won his third Iditarod championship. Mackey had modified it to add his kennel logo and sponsor patches. He also added a wolf ruff to the hood. That parka inspired a limited production run of its replica, he said.

“Shortly thereafter they made 500 replicas with my patch, with the wolf ruff,” Mackey said.

Mackey said Canada Goose asked if they could have the original parka, specifying they wanted it just as it was after the 2009 Iditarod.

“I said, ‘Well, you must realize that I use this on a daily basis and it smells a little like dog and fish and kibble and whatever else,” Mackey said. “And they said, ‘Don’t wash it.’”

He didn’t see it again until 2017, when Canada Goose arranged for Mackey to wear it at a fashion show that coincided with the opening of a store in London. He joked that he could now add his runway model experience to his resume.

“When I took it out of the bag in London, it smelled just like it did when I put it in the bag to send to them several years ago,” Mackey said.

“What I bring to an event like that is real. There is no makeup. There’s no brushing my hair and washing my clothes and stuff. What you get is what you see, and they wanted that. They wanted that stinky-ass coat.”

Drake’s fashion choices are far more scrutinized and imitated. A 2016 GQ story, using one of Drake’s nicknames, said: “The inspiring thing about the Champagne Papi’s wardrobe is that he wears the types of things average Joes want to wear on a daily basis — he just wears them better.”

If the average Joe wants to replicate this style, he better be prepared to dig deep. Most Canada Goose parkas sell for $1,000 and up. Smith said the parka Drake wore is a limited edition of the Constable Parka, which the Canada Goose website no longer lists as an option. This week, a few are listed for sale on eBay, one for around $3,000, one for closer to $4,000. Another listing, one that mentions the Drake connection, is hoping someone will pay about $18,000.

Mackey said dozens of people have reached out to him since the video was released. Mackey, who is in the middle of the training season for the 2020 Iditarod, said it hasn’t affected his life. Still, it’s a nice reminder that people in the world are intrigued by Alaska life and culture.

“To me it’s just a guy wearing a coat in a video,” Mackey said. “It just happens to have my name on it, and that’s kind of cool.”