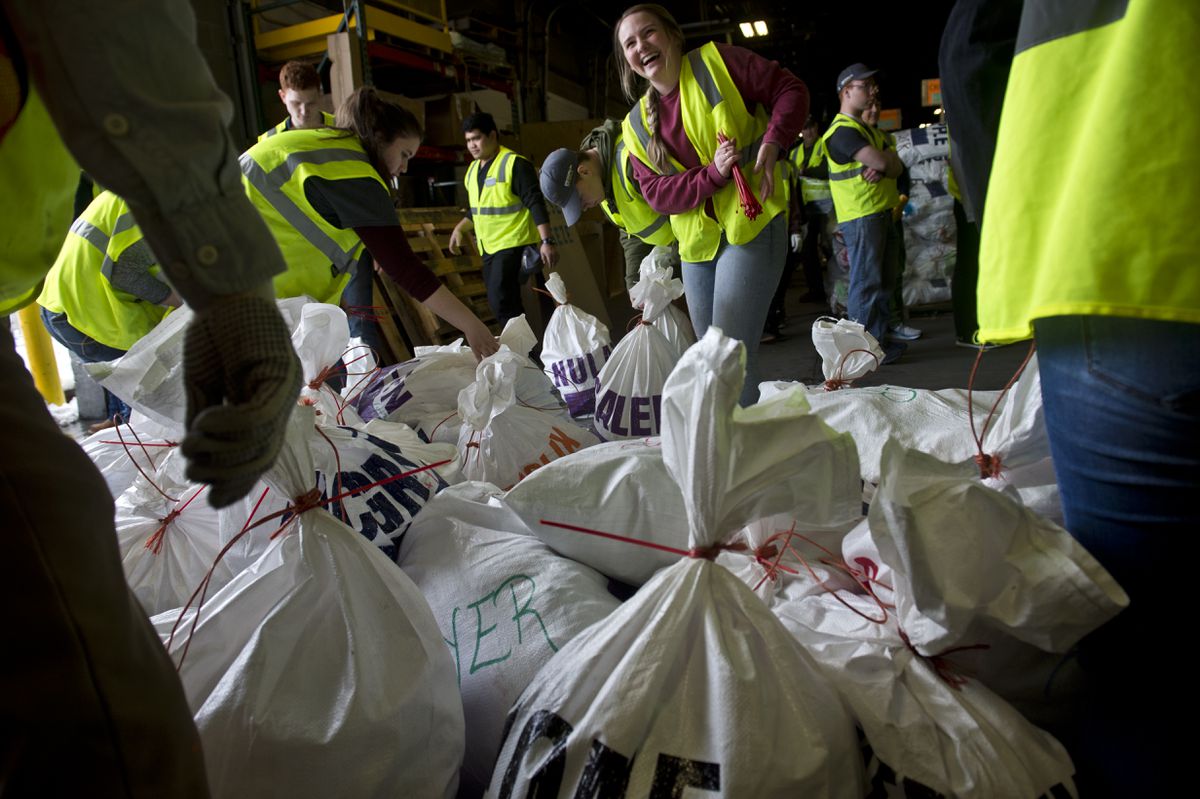 Lexie Edwards, top center, one of dozens of missionary volunteers from The Church of Jesus Christ of Latter-day Saints, helps unload a shipment of drop bags. (Marc Lester / ADN)

Lexie Edwards, top center, one of dozens of missionary volunteers from The Church of Jesus Christ of Latter-day Saints, helps unload a shipment of drop bags. (Marc Lester / ADN)

Mushers in the Iditarod Trail Sled Dog Race began delivering their drop bags to Air Land Transport in Anchorage on Wednesday in advance of this year’s race. Dozens of volunteers helped unload, weigh and sort the bags by destination.

Iditarod race marshal Mark Nordman said mushers typically have 45 to 50 bags prepared, usually totaling 1,500 to 2,600 pounds. The drop bags are packed with food for the dogs and gear for the musher. “They need to be self-sufficient in case something happens, they get stuck in a storm or whatever,” Nordman said.

Drop bag drop-off is open to racers at Air Land’s Anchorage location on Wednesday and Thursday this week. Mushers in the Interior had the option of bringing drop bags to Air Land’s Fairbanks location Monday.

Race veterans Anna and Kristy Berington joked in an Instagram post about the secret weapon they’re sending for the late-race push from Safety to Nome.

From Air Land Transport, most bags are flown via cargo plane to McGrath, Unalakleet and Nome. From there, many bags destined for other checkpoints are shipped through the bypass mail system, Nordman said. Iditarod Air Force pilots will transport bags to remote checkpoints that have no post office, such as Rohn, Ophir and Cripple.

Musher Jessie Holmes knelt on the warehouse floor to do some repacking of his drop bags when one weighed in above the 50-pound limit. Holmes said he’s been training in tough conditions near his new home along the Denali Highway, and that might work to his advantage this year.

“It’s some of the most treacherous training this year, so much deep snow and drifts and windstorms,” Holmes said. “I think that’s what it’s going to take in the race.”

Holmes finished seventh in the 2018 Iditarod, his rookie attempt. Last year, Holmes dropped from a top 10 position to a 27th place finish after giving his dogs extra rest in Koyuk.

“They say the third time’s a charm," Holmes said. "I mean, I’m not going to lie. I feel absolutely confident in the dog team I’m driving.”

Fifty-seven mushers are signed up to race in the 2020 Iditarod. It begins with a ceremonial start in Anchorage on Saturday, March 7. Real racing begins on March 8 in Willow.