With drop bags heading to Iditarod checkpoints, it’s officially time for mushers to get a little edgy 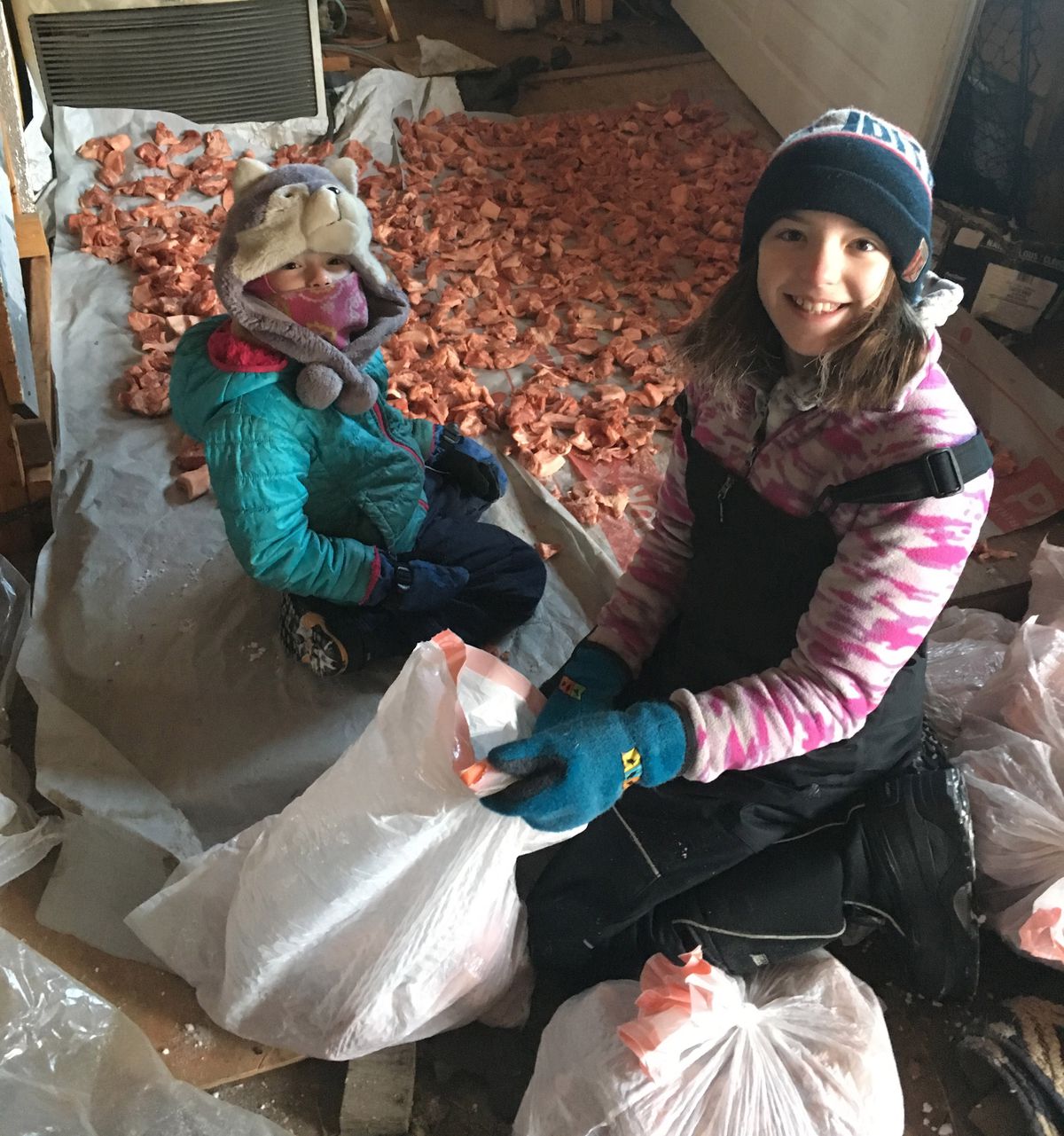 Olivia Schandelmeier, left, and her sister Jona help pack cut-up pork for mom Zoya Denure's 2020 Iditarod drops. The children worked in the family's garage near Paxson on a day when it was minus 40. (Photo by Zoya Denure)

Olivia Schandelmeier, left, and her sister Jona help pack cut-up pork for mom Zoya Denure's 2020 Iditarod drops. The children worked in the family's garage near Paxson on a day when it was minus 40. (Photo by Zoya Denure)

There are 57 people signed up for Iditarod 2020. With about two weeks until the March 7 ceremonial start, there are likely 57 nervous mushers.

Food-drop day is the official start of Idit-get-nervous. Dog food and gear is packed in bags and sent off as mushers wonder, “Did I forget anything? Will it be 50 below in Cripple or 40 above at Rohn? Did I pack enough extra food for the dogs in case I am stuck in the winds of Norton Bay?”

Every musher has a slightly different list of gear and dog food in their Iditarod drop bags.

Beef, fish, fat and some brand of high-quality dog kibble will be in everyone’s supply bags. There will be dog booties, sled runner plastic, spare mittens and socks.

Food for the musher usually is not quite as high on the priority list as the dogs’ food, at least among the more competitive teams. Calories are important, and just how one gets them is individualistic.

Frozen bacon, pizza, lasagna, goulash and various junk foods are the norm. Smoked salmon is a favorite. Whatever the food, much of it has to be able to be chewed and digested in below-zero weather while moving on the sled.

I favored Pop-Tarts when I was racing. You can eat them at minus 40 and still get 400 calories. Chase those carbs with hot water and you have a meal.

Packing for the dogs is more of a challenge. Dogs are individuals, and there are 14 on every team. A large kennel might be able to put together a complete team in which all dogs readily eat the same dog food and meats without an issue. Smaller kennels can seldom accomplish that. Sled dogs — in the yard — eat almost anything, including a smelly glove. They will eat the glove, and should it be successfully digested, then it is to be considered food.

The race trail is different. A sled dog coming off a long run might want to sleep first and eat later. However, on a planned four-hour rest stop, the dog needs calories right away. Five out of six dogs will eat whatever you put in front of them. It is that sixth dog that is worrisome.

A small slice of salmon might get that dog eating. Better have it on the sled and easy to get to. Sometimes a squirt of glucose or sweetened condensed milk might trigger eating. Ice cream — not chocolate — works quite often. I had a picky female on one of my Yukon Quest teams who would only eat clam-and-egg omelets when she was tired.

The amount of dog food sent out in food drops varies from 1,300 pounds to more than 2,000 pounds. The cost of shipping the food to checkpoints is borne by the musher and runs about 60 cents per pound. The cost of high-quality kibble is $1.50 per pound, beef is more than a dollar per pound, and fat, be it beef or pork, is the same. Add 1,500 to 2,000 dog booties at 90 cents each and you can see that food drops aren’t cheap.

Is it any wonder mushers might be getting a little edgy? Did you really forget to put that extra set of runner plastic in the Nikolai drop? What were you thinking? There is always dirt in the Farewell Burn.

Too late. Deal with what was sent or carry it in the sled.

That is the nature of long-distance dog racing, or long-distance traveling in general. The best and smoothest-running teams are those for which the driver has prepared well. But great preparation, while an important factor in itself, is not enough. A driver who wishes to be competitive must be a great problem-solver, innovative and willing to take calculated risks.