Jeff King drops out of Iditarod after emergency surgery 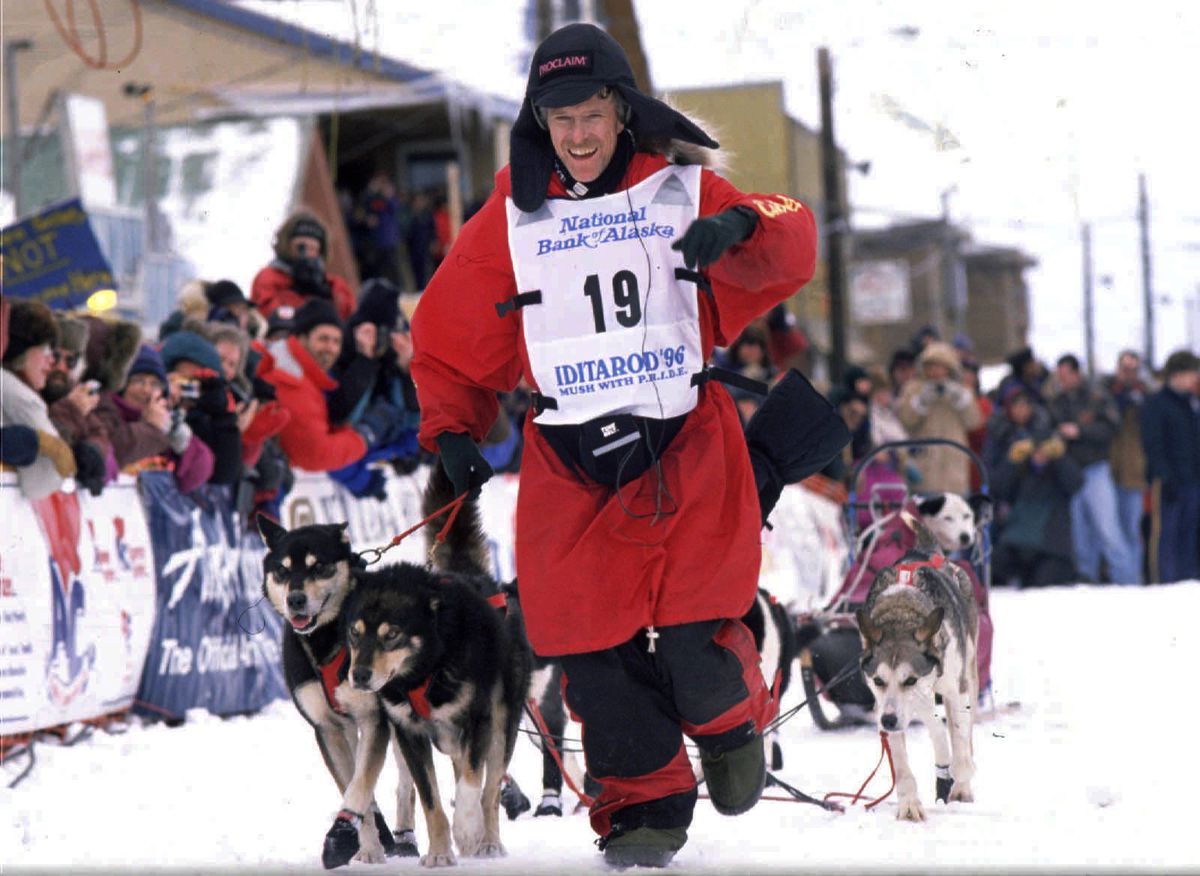 With stomach pain so bad he walked into the emergency room “hunched over like an old man,” four-time Iditarod champion Jeff King drew a cluster of admirers Monday night before being wheeled into an operating room for surgery that will keep him out of this year’s race to Nome.

King, 64, said he’ll spend most of this week at Providence Alaska Medical Center as he recovers from surgery on a perforated intestine.

The Iditarod Trail Sled Dog Race kicks off Saturday with a ceremonial start in Anchorage, and King was scheduled to be one of 57 competitors in the lineup.

He’s a 27-time finisher of the 1,000-mile race and one of Alaska’s best-known mushers, and as he waited in pain in the lobby of the emergency room, he drew lots of attention.

The security guard at the entrance didn’t recognize him, King said.

“But the check-in person did, and then word got out,” he said.

“… Pretty soon doctors and orderlies are telling each other and they’re coming over to talk to me, and I want to get into an emergency room. It was kind of comical.”

King was in good spirits Tuesday afternoon as he recounted events of the previous day, but 12 or 15 hours earlier his situation was serious.

“Everybody thinks it would have been really serious without intervention,” he said.

Trouble started Monday morning not long after King left his home in Denali Park for Anchorage, where he was scheduled to participate in an Iditarod event by Alaska Public Media at the Bear Tooth Theatrepub & Grill.

“Just before we left I just had really extreme cramps,” he said. “I was convinced we put something in our morning smoothie that wasn’t supposed to be there.

“Once it passed we took off and I hoped it wouldn’t happen again. I kinda forgot about it.”

He stopped for a cup of coffee in Talkeetna and drove about 2 miles before the cramps were back, severe enough to make him pull over and wait about 15 minutes before the pain passed again.

“I even called the poison control center to see if the fresh ginger we used (in the smoothie) was part of the reason, and they didn’t think so,” he said.

The cramps came back a third time as King drove through Willow, and he stopped at Three Bears to use a restroom and wait for the pain to abate.

By the time he got to the Bear Tooth, he felt good enough to have a glass of wine before going on stage. Two swallows later he felt the cramps coming back.

He said he felt discomfort during the podcast session but none of the debilitating pain he experienced earlier in the day. He left and went to the home of friends with whom he was staying in Anchorage, and as soon as he arrived there he got the chills and a fever.

His friends are doctors, and one of them put King on a couch and palpated his stomach.

“You need to get to the ER right now,” she said.

At the hospital, the first doctor who examined King suspected a hernia and ordered morphine.

“She came in and pushed the damn thing back to where it belongs,” he said. “There was a tremendous relief of discomfort.”

With the hernia taken care of, the doctor ordered a CAT scan to make sure there was no damage to his intestine, and King got on the phone and called his hosts to tell them he’d be home soon.

“I’m thinking they’re gonna have a hernia belt they can put on me and I can be on the trail tomorrow,” he said.

But the doctor didn’t like the test results and brought in a surgeon, who told King he had a perforated intestine, a rising fever and an infection in his stomach. He needed surgery immediately.

“They said, ‘Your risk of mortality is going to go (up) 10% with every eight hours that passes. Forty-eight hours without treatment and you’d be dead,’ ” King said.

“So I said, ‘Well, let’s get ’er done.’ They rolled me in, I passed out, of course, and when I woke up and talked to the surgeon he said that he cut out 10 inches of my damaged intestine and washed out the cavity and put me on antibiotics. Within a few hours my temperature started going down.”

King said he has a 7-inch incision on his belly and will be in the hospital five to seven days. After that comes three to five months of healing, followed by another surgery, he said.

He said he knows how lucky he is this happened this week and not in a week from now while driving a team over the Alaska Range or across the Farewell Burn.

He also knows he’s lucky he didn’t put off seeking help, and that his Anchorage hosts happen to be physicians who quickly recognized that he needed help.

Meanwhile, he has a team of sled dogs primed to make the 1,000-mile run to Nome.

“I’m lobbying hard for the race to find it in the rules to let him,” he said. “… My food drops are out there and this guy has been training the dogs all year and he’s highly qualified.”