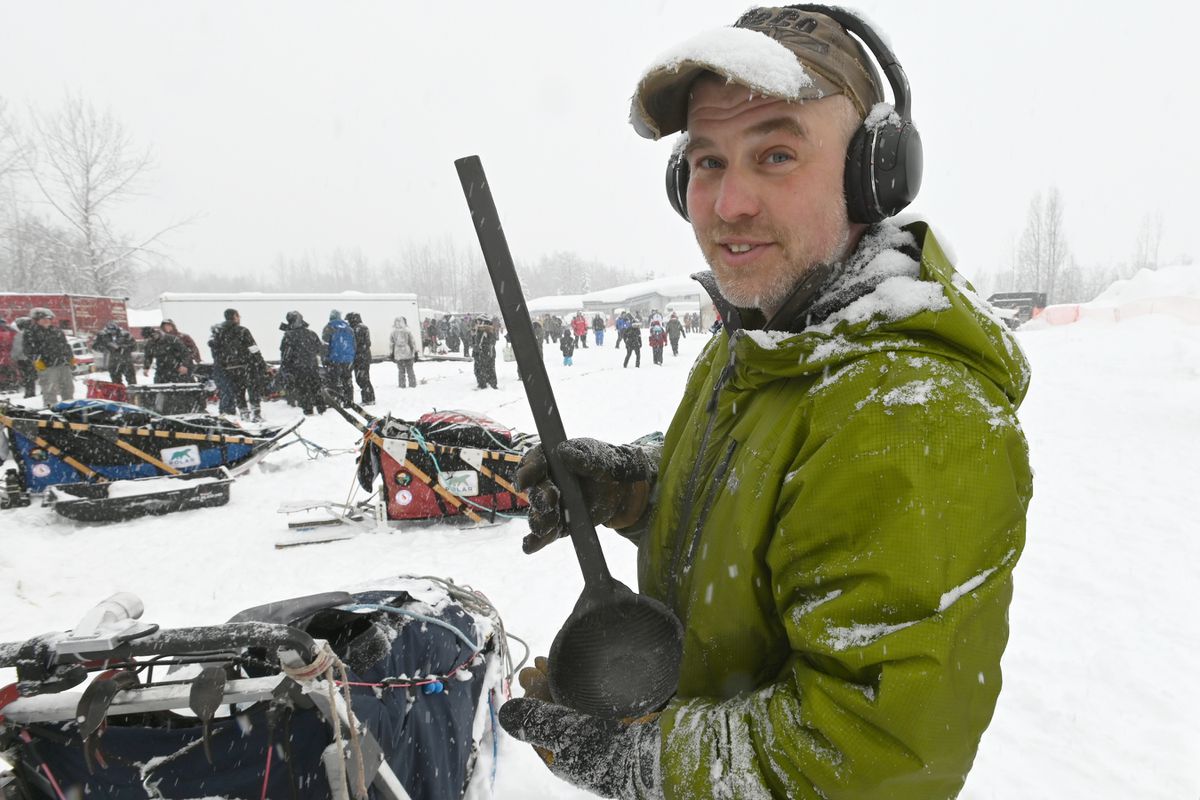 Iditarod veteran Lev Shvarts of Willow holds a carbon fiber ladle that he manufactures and will be using to feed his dogs during the Iditarod Trail Sled Dog Race. Sunday, March 8, 2020. (Bill Roth / ADN)

Iditarod veteran Lev Shvarts of Willow holds a carbon fiber ladle that he manufactures and will be using to feed his dogs during the Iditarod Trail Sled Dog Race. Sunday, March 8, 2020. (Bill Roth / ADN)

The hottest accessory on the Iditarod trail this year isn’t a parka, or a knit hat, even beaver mitts. It’s a carbon-fiber dog food ladle, made by musher Lev Shvarts, that sells for $129 at Underdog Feeds in Wasilla.

Shvarts, who was born in the Soviet Union and is now more American than most Texas ranchers, left his job as principal engineer at a Fortune 500 company to pursue mushing full-time. But he brought his engineering instincts with him. He started working on his iconic ladles three years ago when his previous ladle, an aluminum dog bowl bolted to a stick, broke while he was feeding his team — a problem with which many mushers are familiar. “I thought to myself, I got carbon in the shop. I got epoxy in the shop. I bet I can make something better.”

His initial batch of five ladles sold slowly at Underdog Feeds. “I think there was a whole bunch of sticker shock,” Shvarts acknowledges. But after a few mushers started using them, and other people got curious, sales took off, with surges before major races like the Kuskokwim 300. He now estimates that up to a quarter of the Iditarod field scoops their dog food — typically a fragrant, nutritious slop of meat, kibble and water — with his product.

Today, many ladles later, Shvarts still makes each one by hand in Willow. Each ladle requires many hours of work — with multiple cure processes, each of which takes 24 hours — plus about $35 worth of materials. He estimates that his own ladle has scooped out half a tractor-trailer of dog food and is still going strong. “As long as you use it for what it’s designed for, and not for other purposes, it should last a very long time,” he says. “It’s not an ax.”

So what makes his luxury ladle worth it? “The way I see it,” Shvarts says, “it’s a really (expletive) good ladle that also happens to be really light. I’m really fond of the size, the angle of bowl to handle, and the stiffness of it. If it was made out of laminated human feces, I think it would be a great product, too. It’s just that with carbon fiber it happens to be a lot lighter.” He urges anyone with negative feedback to get in touch with him so that he can continue to perfect the design.

Shvarts, who is currently racing in his fifth Iditarod (he was in 31st place in Rainy Pass on Monday night), also builds his own snow hooks and sleds, and would like to get into the headlamp market. He’s designed a new arctic-duty headlamp unit that “crushes” the battery life of current options and, he says, is highly unlikely to set your parka on fire, unlike some of the market’s top-end headlamps. He’s beta-testing his headlamp during this year’s race, but it’ll be a while before it reaches a commercial market.

In the meantime, is Shvarts worried that another engineer might scoop up the coveted It Ladle title? “No,” he says. “I’m pretty confident that we make the world’s best long-distance racing dog food ladle that’s 15/16ths of a quart.”