As Royer leads Iditarod pack into Takotna, Zirkle lags behind and says this isn’t her year 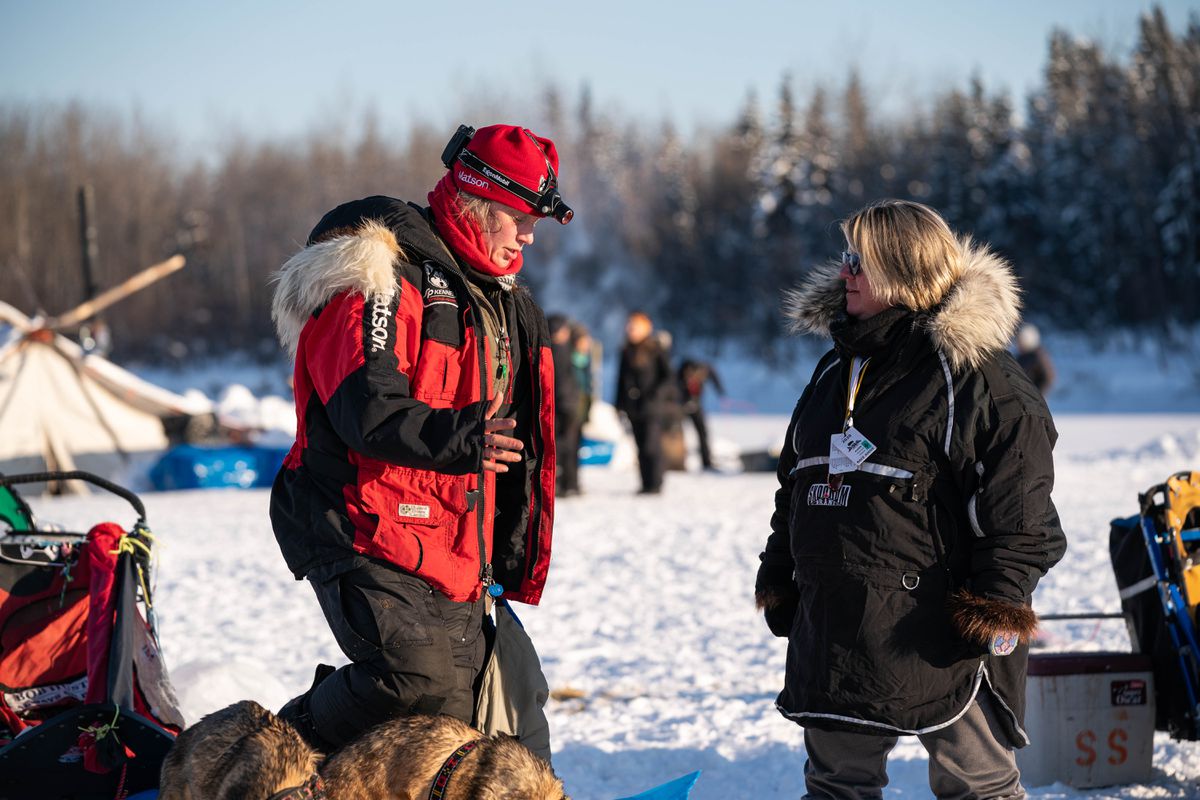 NIKOLAI -- Long after the trail leaders had begun their run to McGrath and Takotna on Tuesday, perennial contender Aliy Zirkle was taking her time at the Nikolai checkpoint, tending to dogs she said are unlikely to put her in contention in this year’s Iditarod Trail Sled Dog Race.

A top-five finisher in six of the last eight races, Zirkle said this won’t be her year to win the race.

“It’s pretty obvious that my speed -- where I’m at and what I’ve done -- has put me nowhere,” Zirkle said as she put booties on her dogs. “They’re happy, they’re just not the fastest pups in the world. As you can see, I’m here and no one else is.”

Jessie Royer of Fairbanks was the first musher to reach McGrath, 311 miles into the 1,000-mile run to Nome.

Royer arrived at 8:56 p.m. and stayed for two minutes before returning to the trail. She won the Spirit of Alaska Award for being the first musher to reach the checkpoint, one of six prizes at stake at various checkpoints on the way to Nome.

McGrath is 18 miles from the next checkpoint in Takotna, a spot where many mushers take their mandatory 24-hour layover. Royer was the first to arrive there too, at 11:30 p.m. with 14 dogs in harness.

Before she left Nikolai for the 48-mile run to McGrath, Zirkle said she didn’t intend to immediately push on to Takotna. She said her dogs started slow and haven’t picked up the pace, so she planned to rest in McGrath rather than drive her team late into the night.

Zirkle said she thought her dogs were ready to run competitively. She was befuddled by their slow pace, but remained in good spirits.

“Regardless, I’ll finish with something I’m happy with,” the Two Rivers musher said. “I am a competitive person, though, so I’d like to be up there in one or two. But that will not happen with that team. They’re great, don’t get me wrong, they’re just not that great right now.”

A sizable pack of front-runners left Nikolai before 5 p.m. Tuesday. Zirkle arrived at 2:49 p.m., and less than two hours later 11 mushers had already moved on.

Brent Sass, the reigning Yukon Quest champion from Eureka, was the first to leave. He spent nine minutes at the checkpoint before departing at 1:47 p.m. with a team of 14 dogs and then stopped to rest a few miles down the trail.

Several mushers passed him, including Royer and Richie Diehl of Aniak, who both spent more than four hours at Nikolai. Diehl reached McGrath at 9:01 p.m., nine minutes after Royer, and left two minutes later. Both were running full teams of 14 dogs.

As the Spirit of Alaska winner, Royer received a pair of beaver and moose-hide mitts made by Loretta Maillelle and a beaver hat sewn by Rosalie Egrass and made from a beaver caught by her husband, Gary, according to Iditarod officials.

Zirkle left Nikolai around 7 p.m. Tuesday. About an hour earlier, Kristy Berington and Anna Berington, whose teams are running at similar speeds, were the 26th and 27th mushers to arrive. They said they planned to stay until about 11 p.m. and then push through to Takotna, where they plan to take their 24-hour rest.

Kristy said she was surprised at the number of front-runners.

“It seems like a lot of people are really pushing it this year and seeing what they can do," she said. "It’s really impressive to me.”

The first scratch of the race happened Tuesday night at Rainy Pass, where 79-year-old Jim Lanier of Chugiak called it quits.

A 16-time finisher, Lanier hasn’t made it to Nome in five straight attempts dating back to 2014. Iditarod officials initially refused his entry this year because they questioned his ability to care for his team, but Lanier re-qualified by running two middle-distance races earlier this winter.