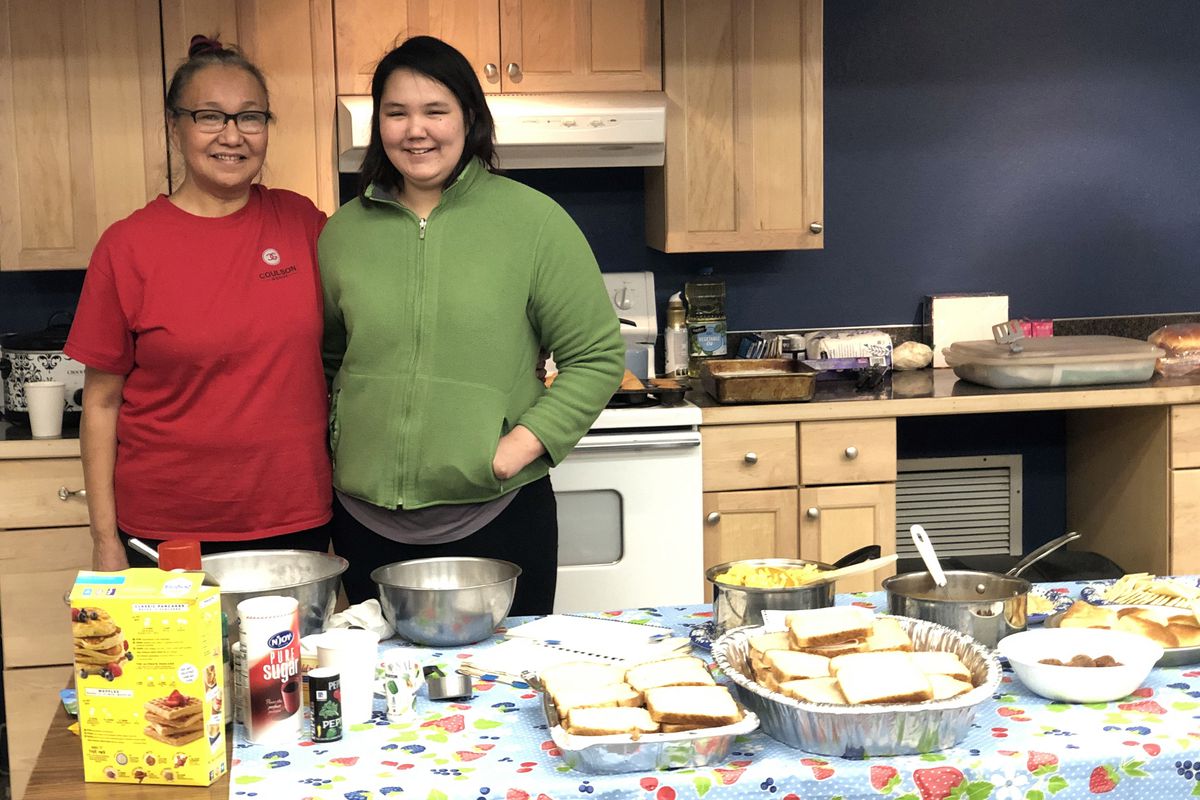 MCGRATH — Before the first mushers arrive, the checkpoint is a quiet place. Volunteers chat around tables in the town office building, drinking Tang and keeping one eye on the tracker, which is projected onto a big screen. (On Tuesday evening, the leaders of the Iditarod Trail Sled Dog Race were closing in on McGrath.)

There’s plastic wrap covering the floor, a nod to the mess to come, and a few people read paperbacks. But one volunteer rushes around the checkpoint kitchen, cracking eggs into metal bowls and pulling pans of muffins from the oven. Her current projects: crumb-topped blueberry cake and Russian Pie. After that? “I’m making Barb’s buns,” explains Amy Chisholm, an Athabascan woman who grew up in Holy Cross and moved to McGrath in the 1970s. “They’re named after our librarian, Barb.”

Chisholm, who works as a firefighter in the summer and tries to leave her winters free for beading, sewing and “stuff like this,” only started volunteering for Iditarod four years ago, but she’s been baking at the checkpoint ever since. She got into it through her granddaughter Rose Johnson, 20, whom she raised. Johnson’s been volunteering since she could barely push a bale of hay around. “I wanted to eat here,” she laughs, gesturing at a plastic picnic table, “and they said that I’d have to help out!”

Now Johnson knows many of the mushers and volunteers, and dreams of being a race official herself someday, traveling to different checkpoints and helping out wherever she’s needed. “I like caring for others,” she says gently. Her cousin has a dog team, so she gets to mush whenever she wants, but there’s something special about the race itself. “I love how the sled dogs are so wound up and noisy and ready to go. It makes me wish I had that much energy.” In the meantime, she compensates like many humans: by drinking coffee with cream. McGrath’s checkpoint judge, Mark Cox, has already told her that she can check in her favorite musher, Lance Mackey, if she’s around when he comes in.

Johnson’s known the Iditarod her whole life, but Chisholm still remembers the first one ever, in 1973. At the time, a lot of local mushers participated, people she knew — she lists off seven names without taking a breath. This year she’s rooting for Aliy Zirkle and Jessie Royer. She thinks it would be great if a woman won. “I have this sweatshirt that says ‘Alaska: Where Women are Women and Men are Butchered, Riddled, and Left on the Trail,’” referencing former champs Susan Butcher and Libby Riddles. “So I want to add ‘Running in Zirkles.’”