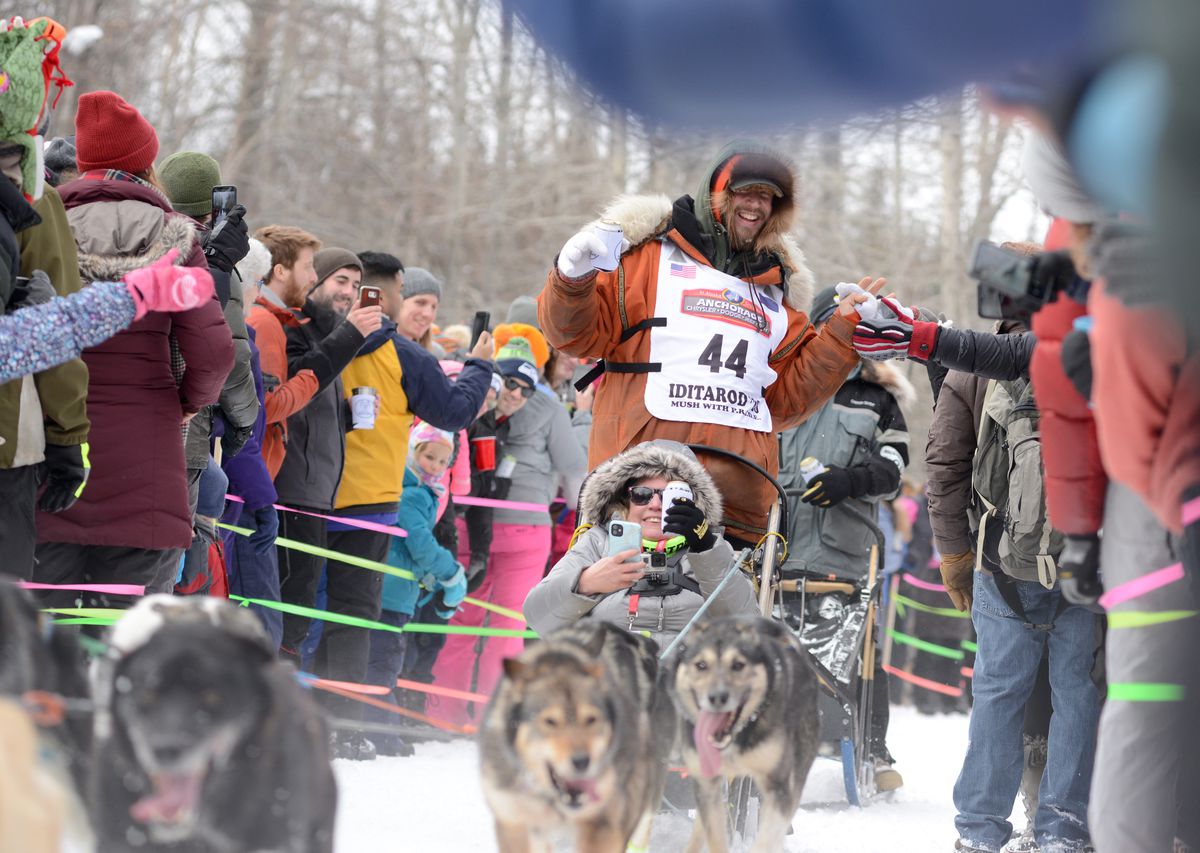 Brent Sass chose gold over a cellphone upon his arrival Wednesday night at the checkpoint that marks the halfway point of the Iditarod Trail Sled Dog Race.

“Now it’s time for the second half of the race,” Sass told Iditarod Insider upon his arrival.

Sass received the GCI Dorothy G. Page Halfway Award, which comes with either $3,000 in gold nuggets or a new cellphone with a year’s worth of service.

He went for the gold.

“I don’t have cell service where I live, so I don’t really need a new phone,” the Eureka musher said when told of his choices, “(and) you can’t pass up gold.”

Sass, 40, has an interesting history with the Iditarod and electronic devices.

He was disqualified from the 2015 race at the Tanana checkpoint for carrying an iPod Touch, which at the time violated race rules that prohibited mushers from carrying two-way communications that connected to the internet.

Sass returned to the Iditarod the next year and placed 20th, but he hasn’t been back until this year. In the meantime, he claimed Yukon Quest victories in 2020 and 2019 to become a three-time winner of North America’s other 1,000-mile sled dog race.

The Quest’s halfway point is in Dawson City, where every team takes a mandatory 36-hour layover. Sass told Iditarod Insider that because of his experience in that race, it made sense to wait until reaching Cripple before taking his 24-hour Iditarod break.

“I know it’s a big push for a lot of people to go to this point in this race for their 24, but it’s in the dogs’ wheelhouse right now,” he said.

Sass said most of his dogs are 3- and 4-year-olds with pedigrees that include two Quest championships, but only one has run the Iditarod before. So far, that’s been a good thing.

“This is all new trail for them, so they’re super excited,” he said.

Sass was the fourth musher to leave Ophir, trailing Paige Drobny, Michelle Phillips and Mitch Seavey. He made the run in one long push after spending nearly five hours in Ophir -- his first long stop at a checkpoint. Until then, he had taken all of his breaks on the trail.

Cripple is roughly 425 miles from Willow Lake, where the race began on Sunday, and roughly 550 miles to Nome, where it will finish sometime early next week. The next checkpoint is Ruby, about 70 miles away.

Three hours after Sass got to Cripple, Michelle Phillips of Tagish, Yukon, drove a team of 13 dogs into the checkpoint. Phillips placed second in this year’s Yukon Quest, reaching the Whitehorse finish line four hours after Sass.

Early trail leaders Jessie Royer of Fairbanks and Richie Diehl of Aniak took their 24-hour breaks in Takotna, about 100 miles from Cripple. They were back on the trail not long after midnight.