For the Berington twins, winning the Iditarod is a dream but not necessarily a goal 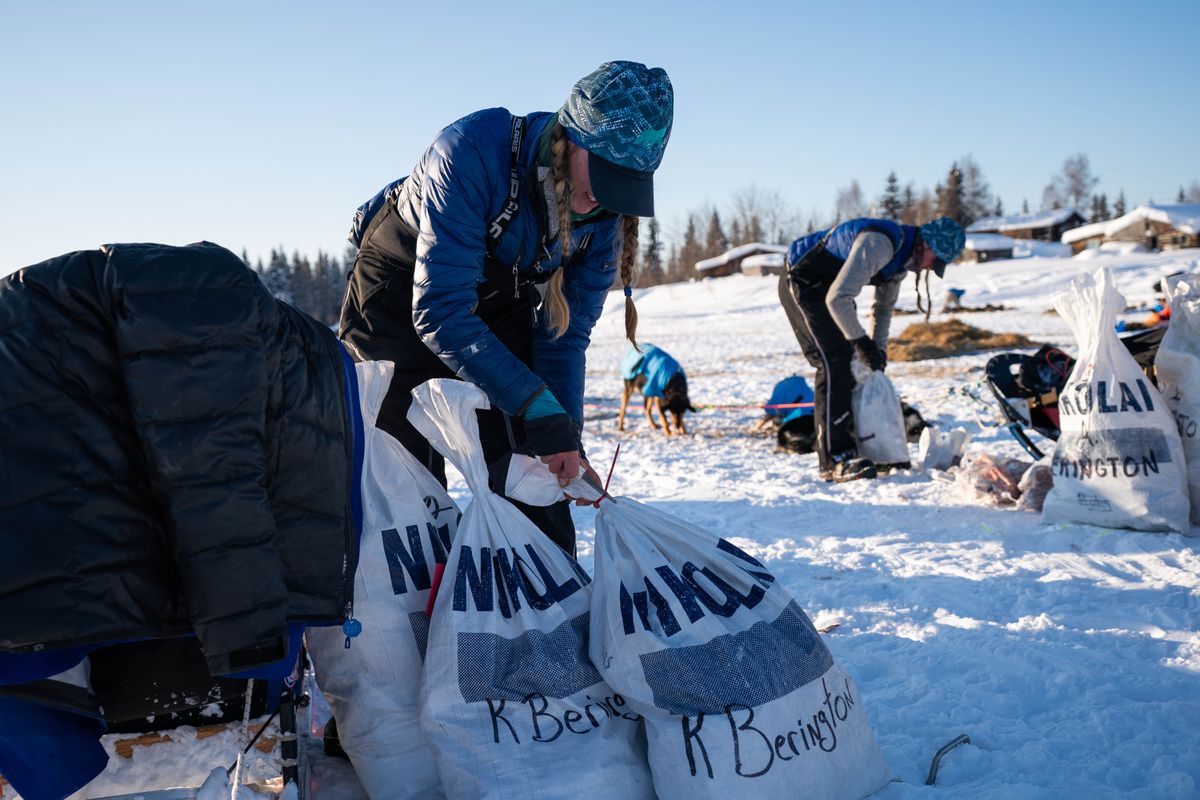 TAKOTNA — Kristy and Anna Berington’s dog-mushing identity is centered on being identical twins.

Their kennel is named Seeing Double, and they are often referred to in the mushing world collectively: “the twins.”

But their devotion to playing a single-person sport as a team hampers their competitive ability, and they know it.

“I think we could put together one really, really good team,” Anna said. “But, with trying to do two teams that do good, you just spread the talent thin.”

Kristy and Anna compete in the Iditarod Trail Sled Dog Race together. Even if their start times are far apart — this year it was 28 minutes — they quickly adjust speeds to meet. On Tuesday, they could be spotted from the air resting in the Farewell Burn, their teams lined up alongside each other.

“It’s something we’ll look back at and always have — those times on the trail,” Anna said.

Kristy has run the race every year since 2010. Anna started in 2012. Last year, they cracked the top 20 for the first time, finishing 16th and 17th. But they think if they concentrated the talent of their 40-dog kennel (including puppies and retired dogs), they could fashion a single, more competitive team.

They’ve talked about making an “A” and “B” team; maybe one sister runs the Iditarod and the other runs the Yukon Quest, or they alternate who runs the top dogs each year.

Those conversations started a year or two ago, and have been coming up more frequently. Other mushers ask them how they can settle for running toward the middle of the pack, rather than become contenders. Why don’t they “rip the cord,” as Kristy put it.

When they first started mushing, that idea didn't come up.

“It was never a thing. It was just, we each get a dog team. That’s what we’re doing,” Anna said.

The two raise and train the dogs together in a small cabin in Knik, where they live along with Kristy’s husband, Andy Pohl. They keep their own dog teams, but they train together. One twin could run the other’s team with no problem, they said a couple of weeks before the race at their kennel.

“We raise and train amazing dogs that potentially could to better than what I allow them to do,” Kristy said.

For the Beringtons, there’s something more than winning. In the most solitary of sports, they work as a team. They help keep each other’s spirits up during the trying times of the race. If they lose a boot or glove, they can borrow from each other. When they get word that there’s a bunch of water overflowing above the ice down the trail, they know it will suck.

“It would be inaccurate for me to say the goal is to win this race,” Kristy said. “That would be a dream come true, but it’s not my goal to win it. I think it takes an incredible human being, and dog team, to win this race, and I don’t think I have what it takes to do it.”

Over the years, racing sled dogs has become part of their core identity. Kristy said even if there weren’t sled dog races, she thinks she would still mush.

“I just love traveling with the dog team. I couldn’t imagine my life without the dogs,” Kristy said.

If they were to split up and really compete as individuals, that creates its own conundrum. Who gets the top dogs? Do they alternate? They’re not sure.

In 2018, Kristy’s husband, Pohl, ran his first Iditarod. Kristy stayed back with him while Anna surged ahead to finish 22nd, her best finish at the time.

“I wondered, do I hold her back? Would she do better without me?” Kristy said. Anna, sitting right next to her, quickly answered.

“But then the year after that we both had our best finishes,” Anna said.

Anna said that it’s Kristy’s turn to run the best dogs, since she had her run in 2018. Kristy said Anna’s the better musher, and therefore has earned the right to the better dogs.

“Watching you in 2018, I was just really amazed with how you stuck to your schedule,” Kristy told her sister.

With 646 miles left in their 2020 race, the twins had plenty of time to think about how to approach next year’s Iditarod.

“You think about all sorts of ideas, but for the most part it’s just focusing on what we’re doing right now, so I’m not thinking too far into the future,” Kristy said.

On Thursday morning, the twins were getting ready to leave after their 24-hour rest in Takotna. During the long break, departure times are adjusted to account for Sunday’s staggered start times. They were 22 minutes apart. But rather than leave at 10:37 a.m. on the dot, like most mushers might, Anna waited for her sister, who couldn’t depart until 10:59 a.m.