Jessie Royer is first to the Yukon River, claiming a 5-course gourmet meal 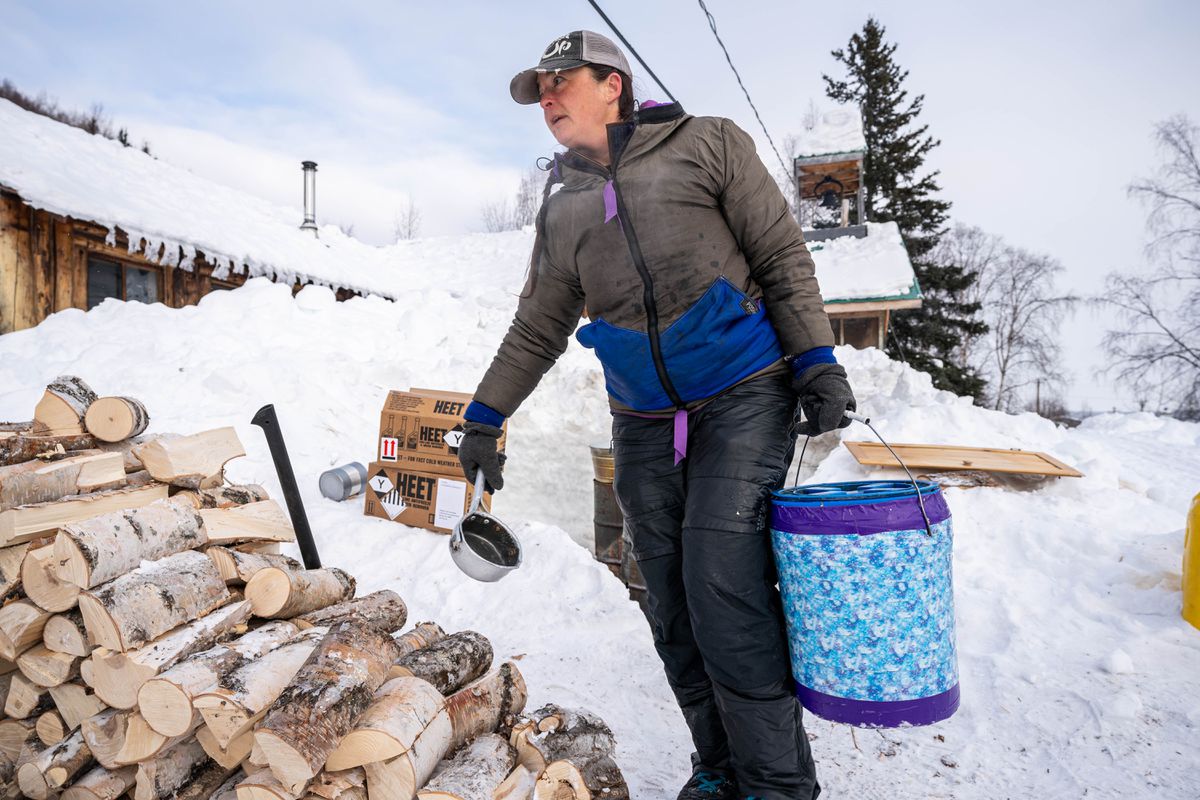 Update, 6:45 a.m. Friday: Jessie Royer was first to the Yukon River at 6:37 a.m. Friday after leapfrogging Brent Sass, who was taking his 24-hour rest in Cripple.

She also gets $3,500 in $1 bills and a bottle of Dom Pérignon Champagne. Royer was also the first to McGrath, for which she got mitts made of beaver and moose hide, and a beaver hat.

By early Friday morning, we had ourselves a dog race.

At 1:30 a.m., five miles separated the six Iditarod Trail Sled Dog Race teams leading the charge to Ruby and the Yukon River. Several miles back were three more teams, according to the race’s GPS tracker, with another group not far behind them.

Jessie Royer of Fairbanks seized the lead Thursday afternoon when she left Cripple with a full team of 14 dogs, 90 minutes ahead of Aaron Burmeister and roughly five to six hours over several others.

As Thursday turned to Friday, Royer was still in the lead, but her lead had dwindled to minutes rather than hours.

Others jockeying for the lead included Richie Diehl of Aniak, 2018 champion Joar Leifseth Ulsom of Norway, Ryan Redington of Skagway, Thomas Waerner of Norway and Burmeister, who splits his time between Nome and Nenana. All were on the move except Waerner, who had stopped along the trail to rest his team.

The teams have plenty of motivation for being the first to Ruby: awaiting the leader there is the Lakefront Anchorage First to the Yukon Award, which comes with a gourmet meal and $3,500.

Ten miles behind her were three more teams, according to the tracker: defending champion Pete Kaiser of Bethel, Brent Sass of Eureka and Wade Marrs of Willow. And they weren’t all that far ahead of the next wave.

A second musher called it quits on Thursday: Jeremy Keller of Knik.

An Iditarod statement said Keller scratched “due to current events” and that “he wants to be home with his friends and family during this stressful time.”

Keller, who is from Knik, scratched at Nikolai. He’s mushing his dogs team back to Willow, where the race started on Sunday, the Iditarod said. His GPS tracker will remain live to “ensure a safe journey for him as he heads home,” according to the statement.