As the race winds down, Iditarod mushers return to real-world problems 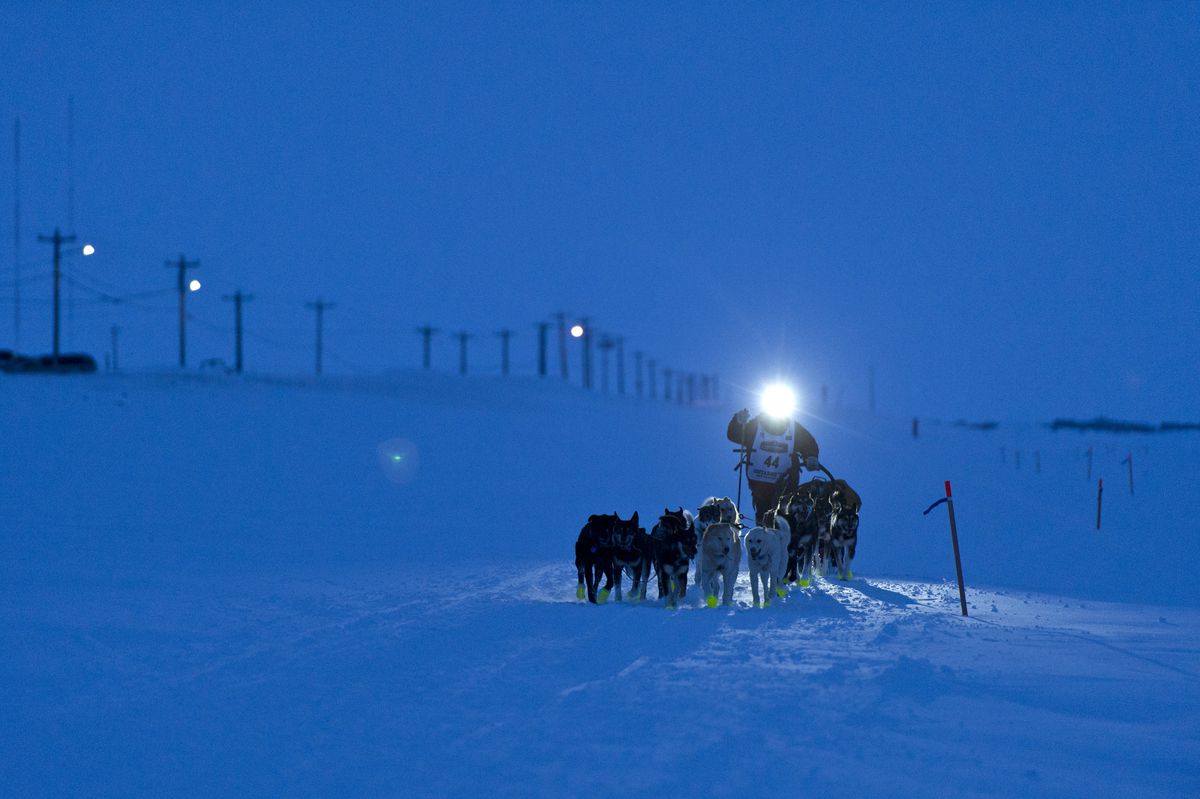 Brent Sass drives his team along the beach just outside of Nome on March 18, 2020, as he finishes the Iditarod Trail Sled Dog Race in fourth place. (Marc Lester / ADN)

Brent Sass drives his team along the beach just outside of Nome on March 18, 2020, as he finishes the Iditarod Trail Sled Dog Race in fourth place. (Marc Lester / ADN)

UNALAKLEET — For 11 days now, Iditarod mushers have been traveling across Alaska while the rest of the country copes with increasing levels of pandemic-response lockdown.

The information that reaches teams on the trail can be unreliable — or, in this case, so surreal as to seem unreliable, particularly when a musher’s world is reduced to trails and checkpoints, booties and meat.

As this year’s race comes to an end, mushers find themselves facing a very different reality from the one they left behind.

“On the trail, we’re kind of in the dark," fifth-place Aaron Burmeister said upon his arrival in Nome, where he grew up. "We don’t have iPhones or email or internet or newspapers.

“We got little tidbits of information but I didn’t have a clue. Heading up the coast, it sounds like the NBA season’s been canceled. I’ll find out more once I get caught up on rest.”

Fourth-place Brent Sass of Eureka said the handful of updates he heard on the trail about “the craziness of the real world” was enough information for him.

“I’m looking forward to getting back out to my place in the Bush and not learning anything about this disease stuff and staying away," he said.

In Unalakleet, Laura Neese of McMillan, Michigan, said she is eager to go home too. There are puppies at her kennel, and this is the longest she’s been away from them all year.

“I want to get home fast," Neese said. “I’m getting excited to play with puppies.”

Midwestern mushers like Neese usually drive through Canada once the race season is over. But with the border closing to nonessential travel, those teams may struggle to get back home.

The challenge is even greater for international teams. Champion Thomas Waerner of Norway will have to undergo two weeks of quarantine if he returns to Norway after the race, with the risk of steep fines — or even jail time — for breaking isolation.

Waerner said Wednesday that he doesn’t expect to be able to return home in for a week or two, maybe longer depending on flight cancellations. He said he misses his family — he and his wife have a combined five kids — but he is content to spend more time with friends in Alaska, including Fairbanks sprint mushers Roxy Wright and Arleigh Reynolds.

“If I have to do a little more time in Alaska, I will be happy,” Waerner said.

Alaska mushers have an easier time traveling but may face other consequences. Many work in tourism during the summer, offering dog sled rides and tours for cruise ship passengers. It’s not uncommon for summer tours to be a musher’s primary source of income, and if the tourism industry halts, or even lags, it could have severe financial impacts on the sport.

Other mushers may find themselves facing the virus from the front lines.

“I knew the pandemic must be a big deal when I was getting updates about it in Cripple,” said Larry Daugherty, a musher and radiation oncologist from Eagle River. “I’ve never been on the trail and gotten news updates at all, so being in Cripple and learning that COVID was taking off … I knew it was big.

"At my clinic, we treat between 20 and 40 patients every single day. They’re 15-minute time slots. If you look at CDC’s protocol for decontamination of a room, it’s a two-hour procedure. If you have one patient with COVID, or heaven forbid four or five, do you interrupt their radiation treatment? There’s a lot to consider. I’ve been fortunate to just think about mushing for a while now, but I’m slowly re-entering reality.”

Pete Kaiser of Bethel, last year’s champion, said he has a “steep learning curve” as he re-enters a world that has changed so much since the race began March 7 with Anchorage’s ceremonial start.

“I guess it’s back to reality for us now,” he said after reaching Nome in 14th place Wednesday afternoon. “I honestly don’t know the depths of it. We don’t have a lot of energy to focus elsewhere but on the team, the trail and the weather, so I haven’t put a whole lot of thought into it yet."

Monica Zappa of Kasilof said she knew about the virus before the race started but was surprised how quickly things escalated.

“All my plans for spring are changing,” she said as she prepared her team to leave Unalakleet on Tuesday night. “I followed (the virus) really closely up until Iditarod, but I didn’t know it would happen this quickly. If I’d known, I might have reconsidered racing, honestly, and spent more time preparing.

"But you hate to do that. You want to live your life.”

She turned to ask a veterinarian a question. “What do you think about booties? In this weather they’re gonna get wet.”

“I think booties are always good,” said the vet.

“I predict a revolution,” she said. “I’m expecting a whole new world.”