At 60, Iditarod runner-up Mitch Seavey has a new race strategy: Acting his age 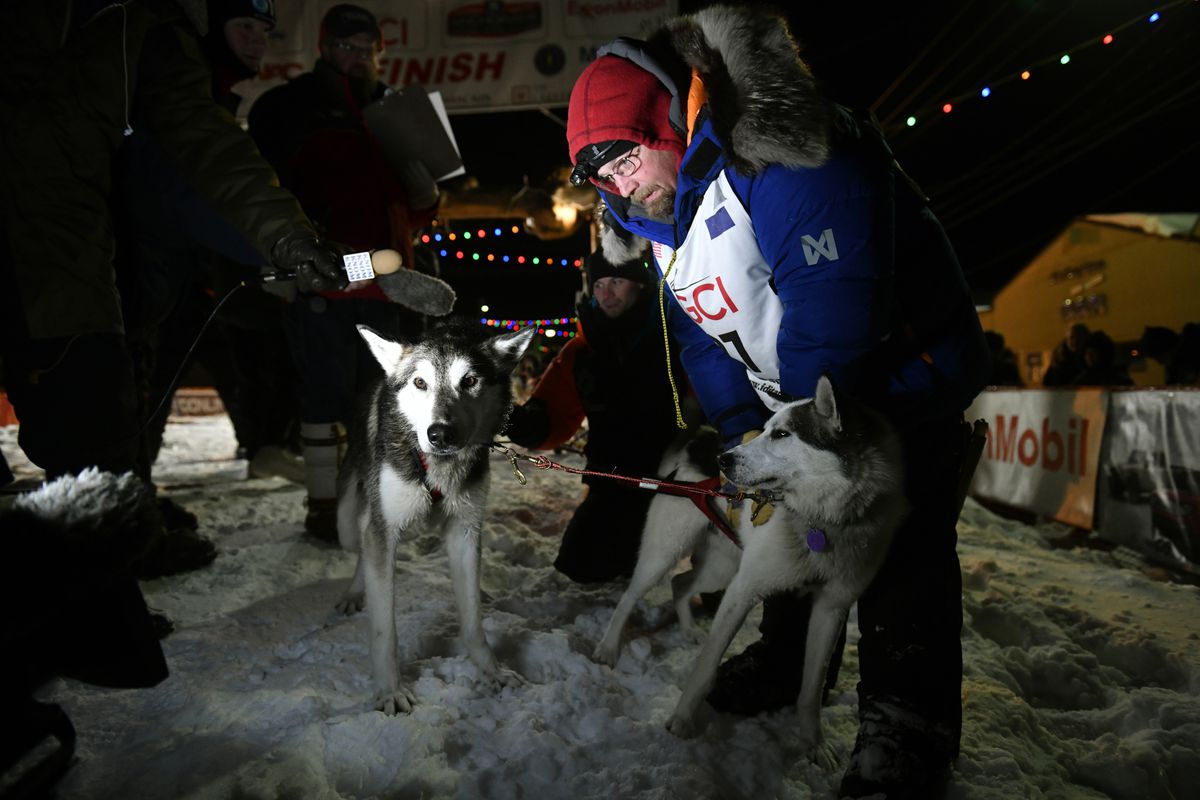 NOME — Mitch Seavey’s secret strategy wasn’t enough to chase down Iditarod champion Thomas Waerner, but it was more than enough to propel the three-time winner to the head of the chase pack.

In the second half of the run to Nome, Seavey rocketed from 15th place to second place to register his seventh top-3 finish in the last eight years.

He was in 15th place at Cripple, the halfway point of the 1,000-mile race. He reached Nome in second place on Wednesday morning, six hours behind Waerner but 90 minutes ahead of third-place Jessie Royer of Fairbanks.

Standing in the finish chute, the 60-year-old musher from Seward shared what he called his “secret strategy” — prefacing it with a reminder that “dogs will run faster if they get more rest.”

“And then I had to clean my glasses, and get a couple more cups of coffee, and some dry socks, and eventually it was 4 hours and 30 minutes before I left.

“But it turns out being over 60 and taking 45 minutes’ extra rest must’ve helped us out.”

[As the race winds down, Iditarod mushers return to real-world problems]

Seavey’s team turned in swift times in the final 500 miles or so; on the run from Nulato to Kaltag and later on the run from Koyuk to Elim, the team was one of the fastest of the race.

Royer, 43, said Seavey’s team was clearly faster than hers on the coast, so trying to catch him was never a consideration. She finished 70 minutes ahead of reigning Yukon Quest champion Brent Sass of Eureka to claim third place for the second straight year.

Royer was pretty much locked into third place when she reached White Mountain on Tuesday, and she anticipated an enjoyable final 77 miles to the finish line. The weather didn’t cooperate.

“It was a frickin’ ground blizzard and snow and blowing and headwinds and I couldn’t see my team,” she said. “They did really, really good though. I never had to give them a command — they found the trail the whole way in.”

Royer said she was happy with her third-place finish, which marked her seventh top-10 finish in 18 starts. For Sass, fourth place was his first top-10 performance in in five Iditarod starts.

Burmeister, who splits time between Nome and Nenana, registered his sixth top-10 finish in eight years. Ulsom, the 2018 champion with seven top-10 finishes in seven races, passed Drobny during the 22-mile home stretch between Safety and Nome to leave Drobny in seventh place for the second straight year.

Rounding out the top 10 were Ryan Redington of Skagway — grandson of race founder Joe Redington Sr. — who placed eighth for the best finish of his career; Jessie Holmes of Nenana and Travis Beals of Seward. Holmes, who has two top-10s in three races, passed Beals between Safety and Nome, beating him to the burled arch by two minutes.

“It doesn’t matter if you’re first, tenth or Red Lantern, getting under this arch is an achievement,” said Beals, who recorded his third straight top-10 finish.

Burmeister, who grew in Nome watching mushers cross under the arch, might agree — but only to a point.

“I’m not satisfied with fifth place,” he said. “I’m happy with it this year, but my goal is to win the Iditarod. I’ll be back because that’s what we’re here to do, and I want to bring a victory back home to Nome.”