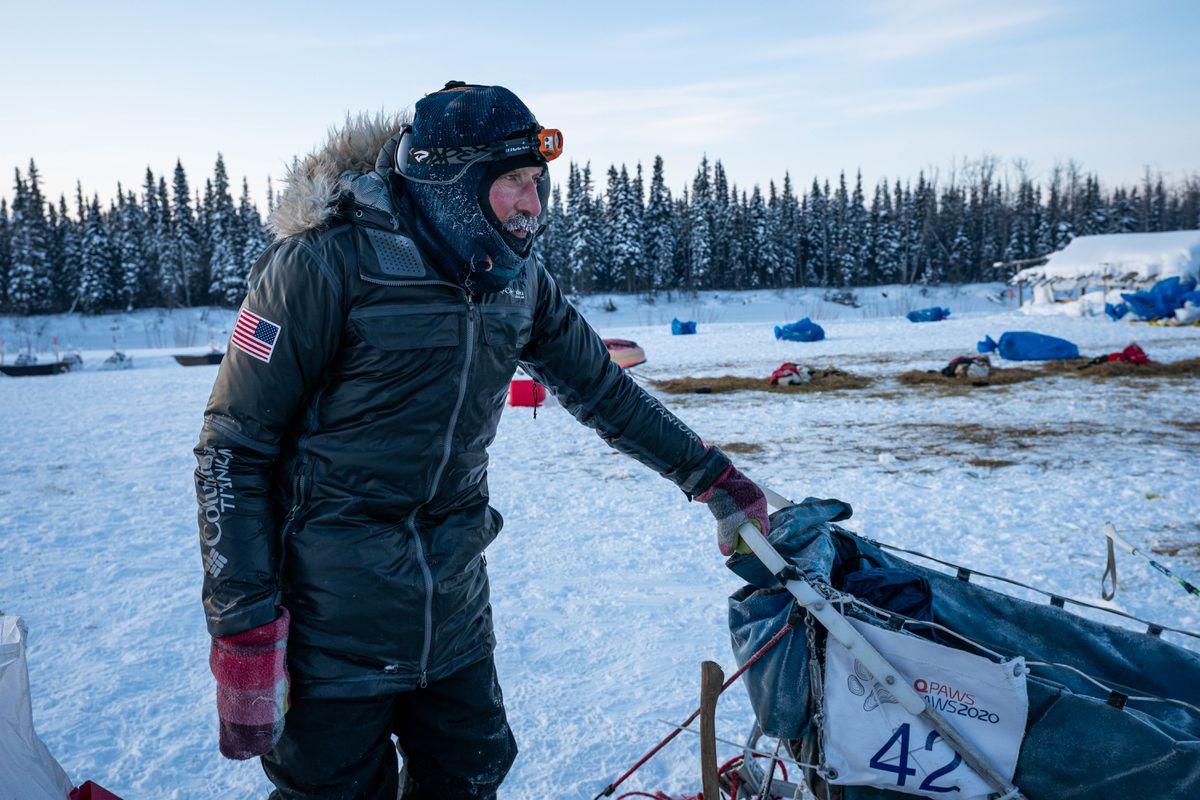 I had no intention of ever running the Iditarod Trail Sled Dog Race. However, there are the best-laid plans, and there is reality.

It was Sunday, March 8. I was in Willow for the start of the Iditarod. The truck and trailer with 14 ready-to-go huskies was pulled into the musher parking waiting for my wife, Zoya, who was entered in the race.

She had called at 9:30 a.m. and said she was on her way from Anchorage in the SUV with the kids. The race was scheduled to begin at 2 p.m. By 11:30, I figured she was running late because of the weather.

The phone rang. Our handler was calling; Zoya was in the hospital with a heart rate of nearly 200. She wasn’t going anywhere.

I spent the next half-hour on the phone with my wife trying to determine if she was OK and what my next step was to be. Ultimately we decided that if Iditarod race marshal Mark Nordman would allow it, I would step on the runners in Zoya’s place.

[Schandelmeier column: If you’re a fan, the Iditarod is coming. If you’re a musher, it’s already here]

“You have the green light, but I wouldn’t advise it," Mark said.

Mark is a smart guy with a ton of dog experience. On the other hand, our entire winter had been spent training dogs. The Iditarod is not always our main focus, but dogs are what our family does. The food drops were already scattered at the various checkpoints, and it seemed wrong to waste them. Zoya had sacrificed family time to do all of the training. Putting the dogs in the truck and going home would be turning our back on all of that.

Now it was scramble time. I had a little more than an hour before my start time. Some of my cold-weather gear was with me in the truck. I had no headlamps, no snow bibs, no balaclava. My boots and mittens were adequate for minus 30s but no colder.

Other mushers rushed in with gear to loan me. Handlers from teams that were already out came over to help me bootie the dogs and hook up.

For better or worse, I was on the trail. Was I qualified to go a thousand miles on one hour’s notice? On paper, the answer was yes. I had completed 19 out of 19 sled dog events of that length, but only two of them in the last 14 years.

My health was good except for an injured leg that had kept me off the dog team for most of the training season. I had been sled-capable since the middle of February. Good to go, right?

[Schandelmeier column: Iditarod trail should be in good shape, but don’t expect a record]

Fifty miles in, I discovered I had no way to tell time. You can’t run dogs without knowing how long you have rested them. I bought a $20 watch from a woman at Yentna Station. I didn’t find out until Unalakleet that I was not on daylight savings, even though the rest of the race was.

I went down the Happy River steps and the Dalzell Gorge mostly right-side up, arriving at the Rohn River checkpoint before I began to get my head wrapped around the concept that I was off on a thousand-mile trip on a couple of hours’ notice.

It was cold between Rohn and Nikolai — minus 45. I camped out halfway between the checkpoints. I had straw for the dogs. My gear was adequate, though not great.

The dogs were running well. They were never going to keep up with the front-end teams, but they were nice dogs, all of them rescue dogs or offspring of rescue dogs, capable of decent speed on the trail and easy to care for. Most were pets — they came when called, and many of them knew how to sit and heel. There were 10 leaders on the team and 11 females, all of them spayed. With lots of rest, they would be fine.

What do you think about standing on a sled for hour after hour? Dogs.

Who should be leading? Does Twinkle really want to run by Journey? He is obnoxious and she doesn’t like him. Twinkle will be soon taking a turn in lead and I can drop Charlotte back. I am hearing a cough from Royal. What is that all about?

My 24-hour layover was at Takotna. I had the vets listen to Royal’s lungs and check her temperature. She was good to go; the cough was in her throat.

The 14 dogs all were lively and healthy. They looked ready to go at good speed. The weather was perfect, just above zero, and calm. The 24 hours passed quickly and we left the Kuskokwim drainage, headed for the mighty Yukon River. The words of Robert Service — “I wanted the gold and I sought it” — were in my head as we traversed the mining district of Ophir, Cripple, Poorman and Long on our way to Ruby.

This is the first of two parts. Next week: Ruby and the run to the Bering Sea coast.

John Schandelmeier is a lifelong Alaskan who lives near Paxson with his family. He is a Bristol Bay commercial fisherman and a two-time winner of the Yukon Quest International Sled Dog Race.