Martin Buser is an Iditarod double-winner, collecting awards for sportsmanship and inspiration 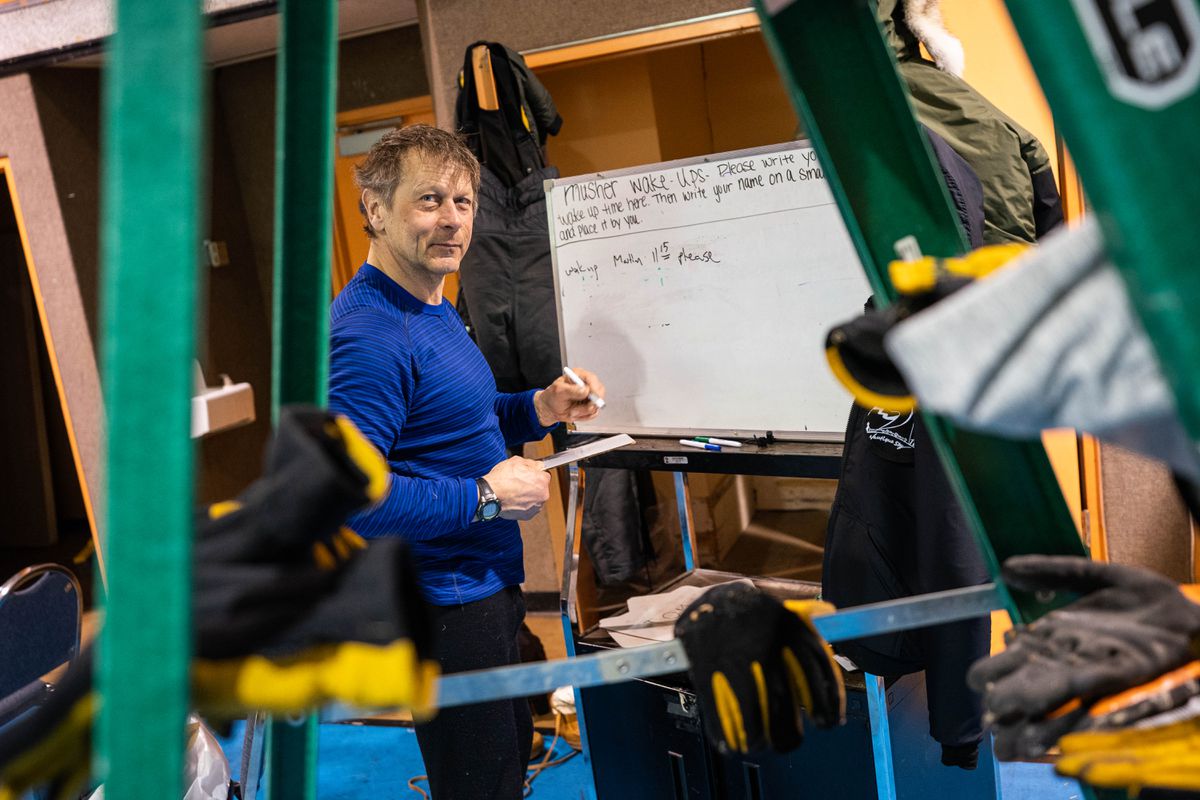 Martin Buser writes down his wake-up time on a whiteboard in the Nikolai checkpoint during this year's Iditarod. (Loren Holmes / ADN)

Martin Buser writes down his wake-up time on a whiteboard in the Nikolai checkpoint during this year's Iditarod. (Loren Holmes / ADN)

Before the start of this year’s Iditarod Trail Sled Dog Race, four-time champion Martin Buser decided to let a young musher who has worked for him for several years pick the best dogs and best gear from the Happy Trails Kennel and take them to Nome. Buser, who believed his protege had earned the opportunity to run the top dogs, would mush a younger, slower team of sled dogs, therefore diminishing his own competitiveness.

On the final day of this year’s Iditarod, Buser crossed the finish line with a full team of 14 dogs -- the only musher to do so -- for his 35th consecutive finish and his 37th overall finish, both race records.

Between those events, Buser offered encouragement to rookies along the 1,000-mile trail and, most notably, provided experience and leadership to the Elim 11, a group of 11 mushers who got stuck at the Elim checkpoint when a sea storm obliterated the trail.

For all of those things, the 62-year-old from Big Lake received two of the Iditarod’s biggest postrace awards -- the sportsmanship award and the most inspirational musher award. Both awards are based on a vote by mushers.

Rookie musher Kaci Murringer -- this year’s Red Lantern winner -- was part of the Elim 11, and she was among those who cast her votes for Buser.

“He was easy to approach and easy to talk to. He was usually at a checkpoint before me and he would always say, ‘Good job, Kaci, your team’s looking good,’ '' she said.

“... I remember DeeDee Jonrowe saying Martin would sing to his dogs, and I started to watch him and try to learn from him. I would see him singing and whistling to his dogs. Him being that positive, it was great to be around that. He was fun to travel with.”

The entire Elim 11 reached the finish line after spending anywhere from 32 to nearly 60 hours at the Elim checkpoint, which is 123 miles from Nome. Teams usually don’t take long breaks there -- 18 of the 28 mushers who passed through the checkpoint before the Elim 11 spent less than four hours there this year.

The race began on March 8, and Buser was among three mushers who arrived in Elim on Wednesday evening, March 18 -- about 20 hours after Thomas Waerner won the race. A sea storm was whipping water onto the trail along Norton Sound, so they waited.

Over the next day, eight more teams arrived and settled into the Elim Fire Hall. The trail was gone, swamped by water, so on Friday morning trail breakers on snowmachines tried to lead the group to Golovin on an overland trail buried by five feet of snow. Their destination was White Mountain, 46 miles away via Golovin.

They turned back about nine miles later, thwarted by the deep snow. The next day, Saturday, March 21, they tried again.

“Normally we like to be a little tricky with our headlamps and things, but I said make sure you can see the light behind you so we can help everyone out. That’s how we got to Golovin, everyone working as a group.”

When the group made its first attempt to leave, it stalled before deciding to return to Elim.

“The first outing we were stuck two hours, and I was looking at five snowmachines go in five different directions, and that means they’re as lost as we are,” Buser said. “So I take out my snowshoes and dig a trench for my dog team, and the 10 teams behind me start digging trenches for their dogs.

On the second attempt to leave Elim, Buser advised everyone to pack as much food as they could, because this time they weren’t going to turn back.

“We thought it might be a two- or three-day trip,” he said.

If it became clear the trip wouldn’t take that long -- and it didn’t -- Buser had another piece of advice.

“I told them to feel free to dump the consumable stuff," Buser said. "The foxes, the wolves will love it. Once you see the town, you can gauge the distance and lighten the load. It’s kind of an old-school lesson.”

Over the course of those couple of days in Elim, the 11 teams operated as a democracy. Buser said he didn’t try to dominate discussions as the group considered its options.

“I was not trying to be an expedition leader,” he said. “I just shared my experience.”

Once they made it to Golovin, everyone made good time the rest of the way to Nome. Four of the Elim 11 -- all of them driving dogs that logged plenty of rest in Elim -- made the 55-mile run from White Mountain to Safety in less than seven hours: Buser, Grayson Bruton, Riley Dyche and Dennis Kananowitz. Only one other musher in this year’s race -- 2019 champion Pete Kaiser -- had a sub-seven-hour run on the same stretch.

By the time the group reached Nome early on the morning of Sunday, March 22, at least one of the Elim 11 had taken to calling Buser “Uncle Martin.”

Buser finished 25th among this year’s 34 finishers, the sixth straight year he hasn’t finished in the top 20. He said he has no issues finishing near the back of the pack. He got to experience a stretch of land he had never traveled before on the overland run to Golovin, and his young dogs learned a lot.

His two postrace awards come with some valuable prizes -- the sportsmanship award is worth $3,000, and the most inspirational award includes free entry in next year’s race, which is worth $2,000-$4,000 for the 2021 race.

So you can expect to see Uncle Martin again next year.

“Isn’t that awesome?” Buser said. “I’m so darned excited about it.”