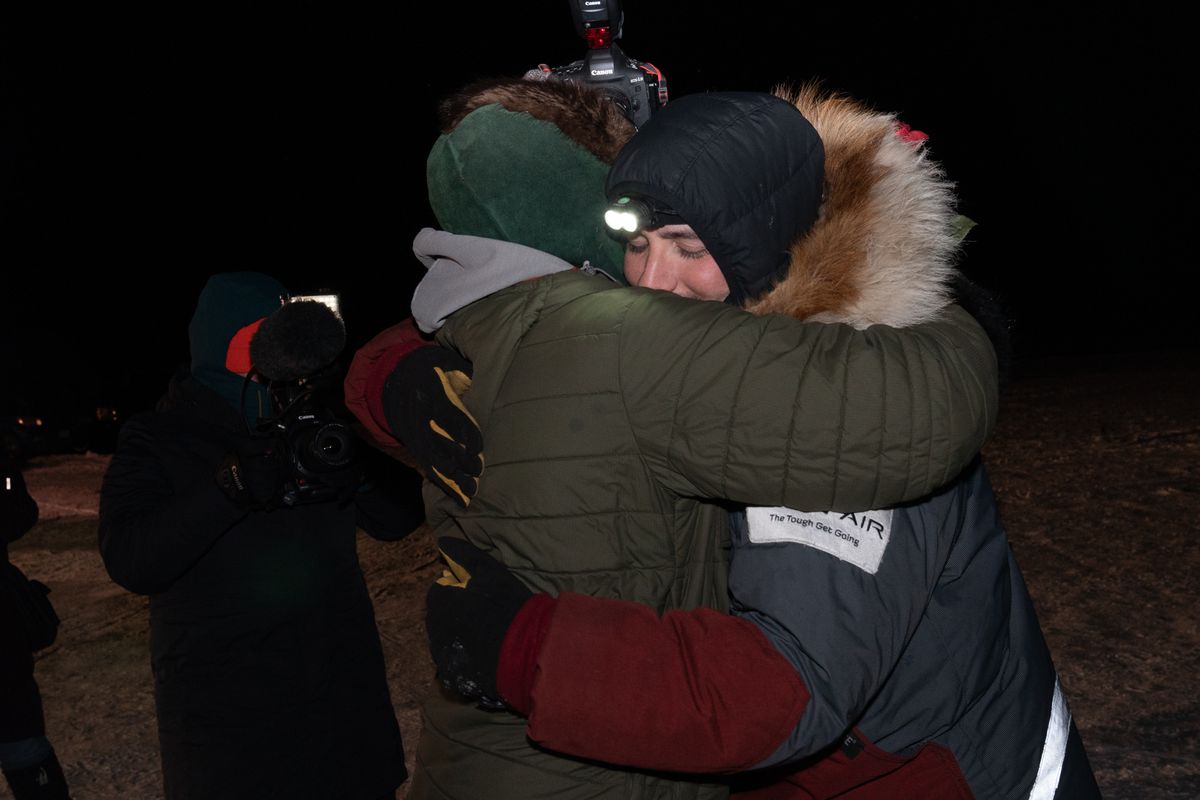 Someone handed Aniak musher Richie Diehl a red rose at the finish line of the Kuskokwim 300 on Sunday morning, a Valentine’s Day offering marking his first victory in the sled dog race he grew up watching and training for.

Diehl, who logged little sleep while driving his team nearly 300 miles in a race that began Friday evening, said he didn’t even know it was Valentine’s Day. And at any rate, he had a different kind of holiday in mind.

Driving a team of dogs nicknamed “the Spring Breakers” for their fun-loving ways, Diehl won the 42nd annual Kusko 300 at 6:38 a.m. Sunday in Bethel.

His victory came two weeks after a win in Bethel’s Bogus Creek 150, but Diehl wasn’t interested in discussing how his winning streak sets him up for the Iditarod three weeks from now.

“This is a race I grew up on, and I love it,” Diehl told reporters at the finish line in an interview livestreamed by the Lower Kuskokwim School District. “It’s the biggest accomplishment in my mushing career so far so I’m not gonna think about iditarod for the next couple days.”

Diehl, 35, took a 43-minute win over his good friend, Pete Kaiser, a five-time champion from Bethel who finished second with a full team of 12 dogs at 7:21 a.m.

Temperatures were in the teens and a light wind was blowing when the frontrunners reached the finish line. A small crowd greeted them and more watched from inside vehicles parked nearby, their headlights adding a bit of light to the dark morning.

Finishing third at 7:40 a.m. was Girdwood’s Nic Petit, who got lost Saturday due to what race officials said was a poorly marked section of trail. Ten minutes was deducted from one of Petit’s subsequent mandatory layovers to make up for the time lost.

Twelve dogs started the race for Diehl -- Demi, Meyer, Bruiser, Monroe, Herschel, Viola, Misty, Dabo, Jimbo, Saban, Herc and Booger -- and all but Booger finished. They showed the same kind of speed that led Diehl to victory two weeks ago in Bethel’s Bogus Creek 150, and according to Diehl, they ran with glee.

“In this team there’s 10 direct siblings, five are 3 (years old) and five are 4. I did the same breeding twice,” Diehl said. “When they were puppies my good friend Eddy Hoeldt named them the Spring Breakers because every day was like a party for them. That explains a lot, because that’s how they were this whole race, they were out there having a good ole time. An incredible team to watch.”

Diehl said the dogs were revved up and focused the entire race. They recovered quickly after long runs and were always ready to return to the trail -- “and they do it having fun,” he said.

“They bounce off the straw every time. They get right into a rhythm immediately. There’s no warming up, it’s just, boom, and it’s amazing to see,” Diehl said.

Diehl posted a time of 36 hours, 8 minutes, on a course that was shorter than the usual 300 miles.

“We didn’t have the same top-end speed as Richie’s had the first day. He held it together, and I had a feeling we would have a really hard time making up time,” he said.

Kaiser, the 2019 Iditarod champion, said he was happy to see the victory go to a musher from one of the villages on the traditional race trail. The Kusko 300 usually goes through Aniak but was rerouted this year to keep villages safe during the COVID-19 pandemic.

“I’m super happy for him (and) his family back home and their community,” Kaiser said. “I know he’s the first local from a community along the race course to win the race, so that’s huge for their community.”

Other area mushers took advantage too, including some who in the past have chosen to compete in the shorter race. Alexander Larson, a longtime musher from Napaskiak who placed fourthl in the Bogus Creek 150, made his Kusko 300 debut by claiming fourth place at 8:15 a.m. Close behind him in fifth place was Aniak musher Isaac Underwood, who finished at 8:22 a.m.

In a duel for sixth place between a couple of former champions, nine-time winner Jeff King of Denali Park beat 2019 champion Matt Failor of Willow by five minutes, arriving at 9:07 a.m.

An earlier version of this story incorrectly identified Nic Petit as a former Kusko 300 champion. It has also been updated to correct Alexander Larson’s finish in the Bogus Creek 150.