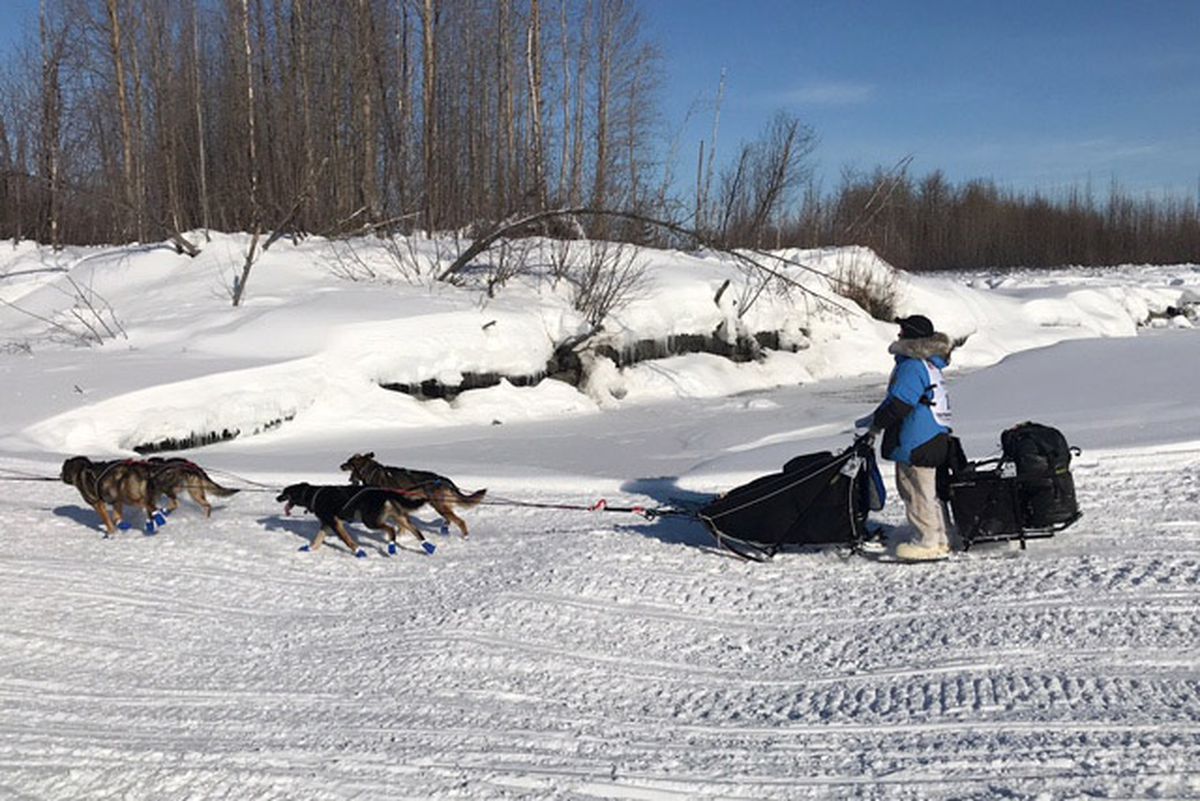 Rookie Brenda Mackey of Two Rivers, drives her dog team on the Susitna River during day one of the Iditarod Sled Dog Race on Sunday. (Bill Roth)

Rookie Brenda Mackey of Two Rivers, drives her dog team on the Susitna River during day one of the Iditarod Sled Dog Race on Sunday. (Bill Roth)

This story has been updated with an expanded article and more photos.

With little of the usual fanfare, Canada’s Aaron Peck led a field of 46 mushers who took off Sunday from Deshka Landing for the start of the Iditarod Trail Sled Dog Race.

The sky was blue and the sun was shining, but few people other than race personnel were on hand to watch teams begin their 852-mile journey on the historic wilderness trail.

It’s the shortest race in history, and one of the smallest fields too.

Rookie musher Sean Williams of Chugiak scratched on Sunday morning because of “a non-COVID-19-related family health concern,” the Iditarod reported.

COVID-19 mitigation plans rerouted the race to keep it out of communities on the Yukon River and the Norton Sound coast. That means dog teams won’t see the burled arch on Nome’s Front Street, where every other race has finished.

It also means the race won’t be 1,000 miles long this year -- and that Deshka Landing, a popular boat launching site near Willow, will serve as both start line and finish line.

The field of 46 is the smallest since 39 teams began the 1978 race. A field of 66 signed up, but 19 have dropped out, including defending champion Thomas Waerner of Norway, who said pandemic-related travel restrictions derailed his plans to return.

The race marks the return of a champion and the final race of a fan favorite.

Dallas Seavey of Talkeetna, a four-time champion, is back for the first time since 2017, when four of his dogs tested positive for a banned substance, launching more than a year of controversy for Seavey and the Iditarod.

Aliy Zirkle of Two Rivers, a three-time runnerup, is making her 21st race her final Iditarod appearance. She finished second three years in a row from 2012-14 -- twice to Seavey and once to Seavey’s dad, three-time champion Mitch Seavey.

From Deshka Landing, teams head north to the Alaska Range and beyond. Once they reach the ghost town of Iditarod, they make a short loop in the old Iditarod Mining District before heading south for the return trip to Deshka Landing and a second, unprecedented crossing of the Alaska Range.

Here’s the start order and the bib numbers for this year’s mushers: