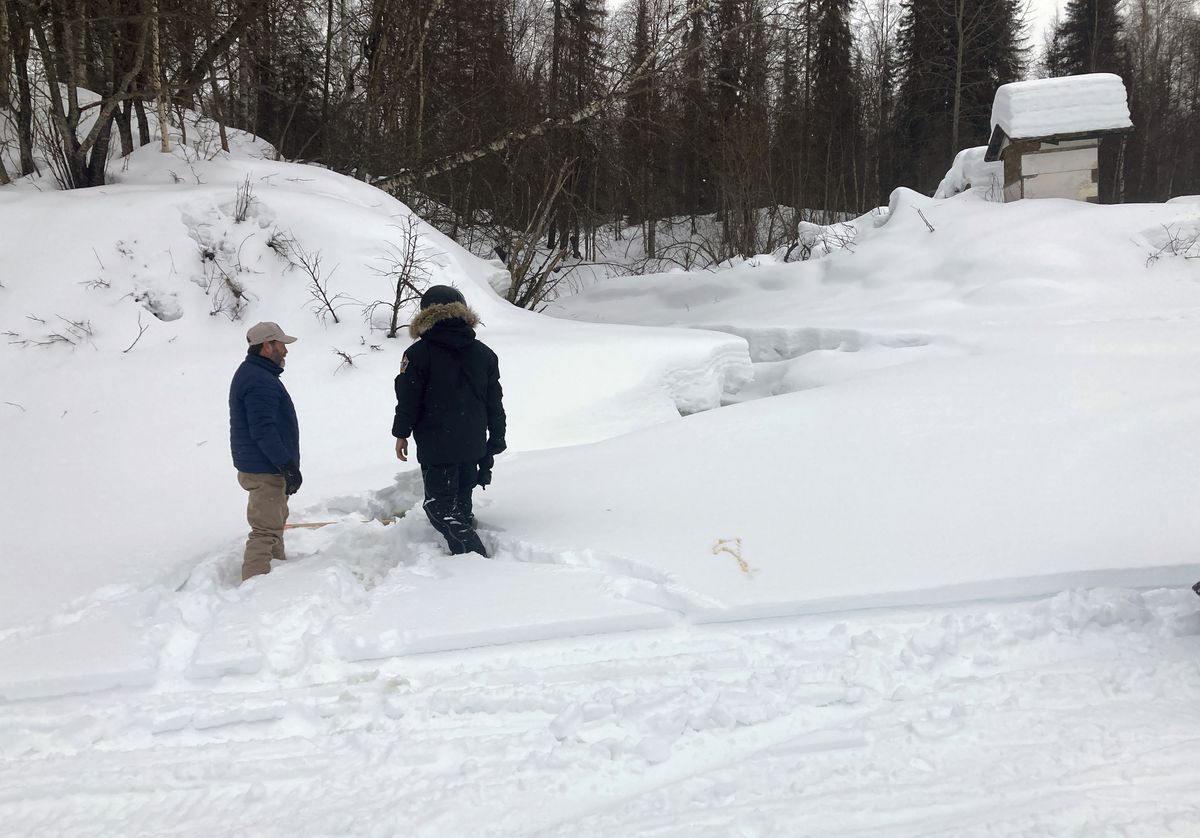 An Iditarod volunteer and two state wildlife troopers in Skwentna rescued an 8-year-old boy who had fallen through the river ice at the Iditarod Trail Sled Dog Race checkpoint on Tuesday.

“It happened really fast. I was glad I was at the right place at the right time,” said Doug Ramsey, an Iditarod volunteer from Sundance, Wyoming.

Ramsey wouldn’t have been at Skwentna, the first checkpoint of this year’s Iditarod, in a normal year. But a course change meant the race would come through twice about a week apart, so Ramsey was stationed there waiting for teams to return, killing time in the sleepy village of a couple dozen residents.

“I was walking down on the ice down there picking up some garbage and just looking around at the area. And two troopers came along on their snowmobiles. And they stopped and we’d been visiting a little bit and didn’t think too much about it,” he said.

[Mushers at the Iditarod’s midpoint prep for a new challenge: Head-on traffic]

Nearby, two local children were playing around on snow on top of the frozen over confluence of the Skwentna and Yentna rivers. Suddenly, Ramsey heard a commotion.

As he approached the boys, he remembered instructions for rescuing people on ice from ice fishing back in Wyoming. He lay on the ice to distribute his weight and extended his arms toward the boy.

“I reached out and grabbed the back of his coat and started pulling him as much as I could up towards out of the hole up on the ice,” he said.

But lying on the ice, he couldn’t get enough leverage.

Meanwhile, the two wildlife troopers sprinted over to help.

“We realized it was kind of more of a serious situation,” said Wildlife Trooper Jason Knier.

Knier and his partner Dan Gunderson were lucky to be at the right place at the right time too. They had been on a trail patrol mission on snowmachines when the trailer hitch of their snowmachine broke, delaying their planned schedule. If it hadn’t been for that, they’d perhaps have been back at the trooper station in Wasilla.

When Knier got to the hole in the ice, he saw the boy slowly getting dragged farther under the ledge.

“He just kept disappearing underneath the ice as his legs kind of curled around the ice. The current kept dragging him downriver as he kept getting pulled, I guess you could say,” he said. He thinks he remembers the older brother yelling, “I can’t keep holding him.”

Knier called out for the boy to hold out his hand.

“I was able to grab onto his one arm and just kind of yard him out of the water completely,” he said.

Knier said the boy was cold, but without them being there, he easily could have been sucked under the ice and the rescue could have turned into a body recovery.

“He was definitely wet from his neck down. He was shivering quite vigorously,” he said.

Steve Childs, the boys’ grandfather and village postmaster, had a slightly different take after investigating the scene later in the day. He was told about the rescue later in the day after the boys had warmed up in a nearby cabin.

“It did look pretty impressive and everything until I stuck a stick in the water,” he said. His stick test showed the water to be knee-deep.

“When they pulled him out is how he got so wet and through the snow. It wasn’t quite in the river,” he said.

Still, he says, he’s thankful the troopers and the volunteers were there to help. And all of those involved agree that water safety in the winter is something to take seriously.

“They did learn to be even more careful in what they already were. And they did handle it quite well,” he said.