Minus-55 weather, an ‘unnerving’ COVID-19 case and a gang of top contenders on the Iditarod Trail 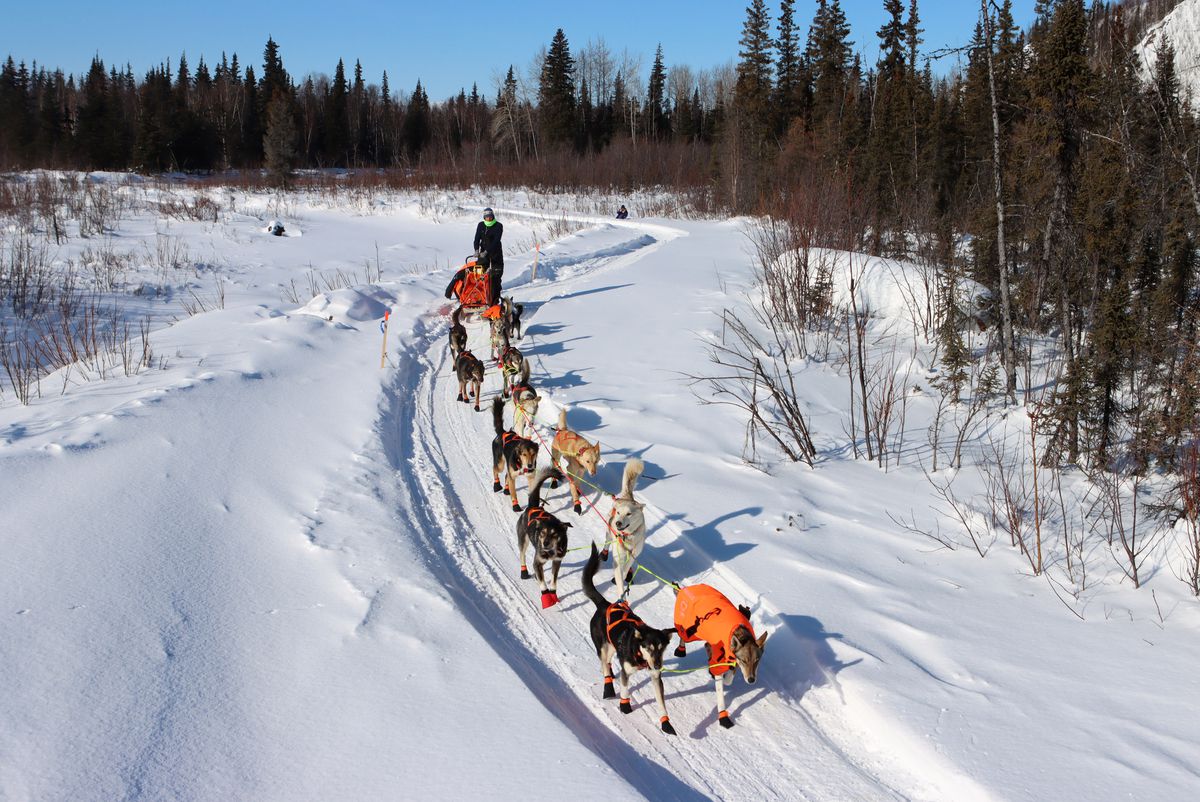 OPHIR — Pete Kaiser, Richie Diehl and Joar Leifseth Ulsom were getting ready to leave the checkpoint here after taking eight-hour rests Friday afternoon. For much of the long loop from McGrath out to Iditarod and back, the trio has run and rested in sync.

“We definitely didn’t plan it,” Diehl said, noting the three were nowhere near each other in early stages of the Iditarod Trail Sled Dog Race.

Kaiser is from Bethel and Diehl is from Aniak, about 100 miles upriver on the Kuskokwim. Leifseth Ulsom is from Norway, but joked that he’s been designated an honorary Y-K Delta musher by the others.

While in the heat of competition, they are men of few words. But rested and ready to run, their moods were sunny as they prepared to leave.

Both Leifseth Ulsom and Kaiser have won the Iditarod. Diehl has not, but he’s a definite contender, with a strong team coming off a win in the grueling Kuskokwim 300 race earlier in the winter. He was the first of the trio to take off past the scrubby willows and snow-buried bulldozers on the inbound trail.

None of the mushketeers had any problems the day prior navigating dozens of head-on passes racing south from Iditarod to Ophir.

“We didn’t have any major tangles or setbacks,” Kaiser said.

“It was tight. But nothing major,” said Diehl.

More unsettling was news that a competitor, Gunnar Johnson, was withdrawn from the race Wednesday after testing positive for COVID-19 after arriving in McGrath.

“That was the worst-case scenario, that it could happen to a musher,” Leifseth Ulsom said. “We’re all at risk for it, so it can happen to any of us.”

Both Kaiser and Diehl learned about the positive test result as they were leaving McGrath at the end of their mandatory 24-hour rests.

“I’m pretty much doing what I’m doing,” Diehl said. “I don’t go and hang out with a bunch of people or be around a bunch of people. And if I do, I put a mask on. We’ve been dealing with this for a year now, and I think we all know what we have to do to play it safe.”

The competitors are socially distant in ways that the hundreds of volunteers, veterinarians and pilots who enable the event cannot be. And according to Kaiser, there was relatively little he can do differently knowing the virus is present on the race trail.

“Not a whole lot you can do about that from a musher standpoint, we’re just kinda doing our race,” he said.

By Saturday morning, Kaiser had scratched from the race in McGrath “in the best interest of his race team,” according to Iditarod officials.

In the smattering of opportunities for congregating, extremely cold weather has made social distancing on the race trail even more challenging.

It was minus-55 overnight at Ophir. The Arctic Oven tents brought in to shelter race staff and mushers use propane tanks for fuel, but exposed to that kind of cold, the liquefied propane has trouble gasifying to provide heat. So tanks left outside -- where they are intended to be used -- have not been working properly, sending people scrambling to keep warm, even if it means piling into a tent, cabin or shack that is not their assigned sleeping spot.

Mushers, for the most part, have accommodations that are just for them: two Arctic Ovens in Ophir, a cabin at Iditarod and an airplane hangar in McGrath.

But some are still leery of commingling. Even more so after news of the positive test.

“It doesn’t make me want to stop in McGrath or Nikolai,” Paige Drobny said as she sprinkled nutrient powders over a cook pot filled to the rim with frozen meat hunks and beef fat for her dogs.

Drobny took her 24-hour mandatory rest in Ophir and only ventured into the Arctic Oven “because it was grotesquely cold out.” Otherwise, for the better part of a week, she’s been entirely outside.

“I haven’t been in a building yet, I just have been in that tent only,” she said.

A veteran Yukon Quest competitor, Drobny is familiar with camping in extreme cold during long runs. But rest stops along the Quest tend to be “pretty plush,” she said, with hot meals, warm beds and help drying out wet gear.

Not so in Ophir.

Without functional wood stoves or reliable indoor heat along stretches of this year’s trail, she’d been running in wet shoes and pants for days.

“Doing the 24 here and not having any amenities and not being able to get warm, it was really hard to take care of the dogs and take care of myself,” she said.

[Iditarod musher Dallas Seavey was the first back to McGrath. Now, he says, is when the real racing begins.]

Johnson’s COVID-19 case has not changed much about how Jeff Deeter is running his race, but it is certainly on his mind.

Like Drobny, Deeter has avoided all indoor spaces save the hangar in McGrath where he took his 24.

“Otherwise I’ve just been sleeping outside,” he said.

At the end of his dog line sat his slumber system: a voluminous sleeping bag laid on straw. He also carries a bivy and a tent fly, and he wraps himself in his parka like a blanket.

Even so, Deeter only allows himself one hour of rest at a time when he’s camped out.

“I’m comfortable for about an hour, then I start shivering, which means it’s time to get up,” he said. “So it’s good.”