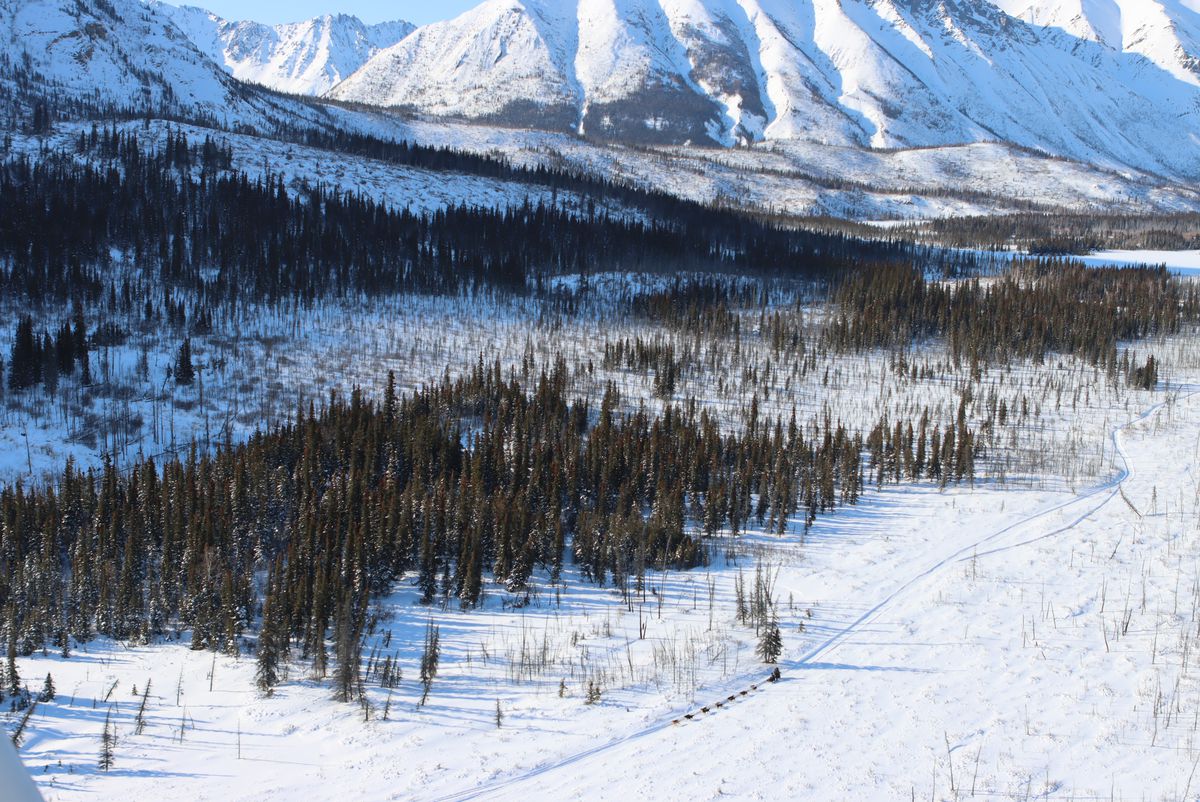 Aaron Burmeister leapfrogged past Dallas Seavey and was the first musher to arrive at the Rohn checkpoint during the Iditarod Trail Sled Dog Race on Saturday. (Zachariah Hughes/for ADN)

Aaron Burmeister leapfrogged past Dallas Seavey and was the first musher to arrive at the Rohn checkpoint during the Iditarod Trail Sled Dog Race on Saturday. (Zachariah Hughes/for ADN)

McGRATH — In the final big push of the Iditarod Sled Dog Race on Sunday, top competitors were leapfrogging one another, jockeying for a lead as they re-cross the Alaska Range.

“This is what we’ve been building up the team for the entire race. It’s taken a lot of patience but it’s the game plan I came in with,” Nome/Nenana musher Aaron Burmeister told Iditarod Insider in McGrath.

Burmeister was the first musher to arrive in Rohn on the inbound trail — but Seavey was the first to leave and embark on the 172-mile trek back to Deshka Landing.

Burmeister noted his decisions to build up rest earlier in the race, even falling behind initially, so his team would be in a better position heading into the final third of the race.

He said he’s learned a lot from the mistakes he’s made in previous Iditarods, even in the years when he notched top-five finishes.

“You put all those mistakes together that I’ve made over the years, and hopefully we can pull one off and one comes together just right.”

Seavey, who lives in Talkeetna, was bullish on his prospects in the final third of the race.

“This portion of coming up is definitely my favorite portion of the race. This is where we actually get to race, finally, after all year of training,” Seavey said in McGrath on Friday morning, a few hours before Burmeister arrived there. “The first third of the race: getting these guys into a routine and a habit. The second third of the race, putting us into position. Now, the final third, we get to actually do it. So that’s pretty fun.”

“My goal is always to win as easily as possible,” Seavey said.

[Minus-55 weather, an ‘unnerving’ COVID-19 case and a gang of top contenders on the Iditarod Trail]

Farther behind Burmeister and Seavey, a handful of mushers spent the morning in the McGrath dog lot reflecting on what has gone right or wrong in their runs so far.

Pete Kaiser, who won the Iditarod in 2019, had scratched Saturday morning for the sake of his dogs. In Ophir the day prior, he said the team was experiencing issues.

His sleds and dogs were all laid out. According to race marshal Mark Nordman, Kaiser, his team, and supplies will be able to fly directly from McGrath to his home in Bethel.

Anchorage rookie Chad Stoddard was rubbing his dogs’ paws after making a chilly run into McGrath, his hat and gaiter still coated with frost.

“I wasn’t quite wearing enough,” he said of the inbound run. Though he’d stopped at Ophir for a rest, the small Arctic Oven on site wasn’t a good place to dry or thaw out his gear.

“I haven’t taken off my boots to get them unthawed since Iditarod,” Stoddard said. “So they’re totally frozen.”

“Everything’s a bit more challenging when it’s cold like that,” he added. “I haven’t done a good job of taking care of my hands, that’s one thing I’ll do different in the future.”

On the other side of the dog lot, Matthew Failor was hobbling as he ladled out food for his dogs.

“I have to have full hip replacement. I have no cartilage left in this hip, I found out a couple months ago,” said the Willow musher, who recently turned 39. “It’s pretty painful.”

He has surgery scheduled in two weeks for the replacement.

Failor was still hoping for a top-20 finish, but the race has not gone as well as he’d hoped. The cold conditions have not helped.

“Thankfully it was only a couple nights. If it was a week of that I probably wouldn’t enjoy dog mushing,” Failor said. “I don’t enjoy ‘survival dog mushing.’”

In a year like this one, with a lot of spare accommodations and camping out, that is working to his disadvantage.

Big Lake’s Martin Buser was not having a very good Saturday morning either, although he was still talkative as he focused on sled repairs, using a knife to chip away ice and splotches of frozen brown dog excrement splattered on the front of his runners.

Buser lamented that changes in this year’s race mean forgoing annual rituals, like receiving a bag of muktuk in Unalakleet each year from a family friend. But not this year in McGrath.

Nothing in the race was working as he had planned.

“I feel like my dogs are in slow motion mode here,” he said. “The whole race has been perplexing.”

His goal was to finish with healthy dogs, but his promising start from a few days ago had crumbled.

“I got quite a few dog issues. So whenever that happens there’s only one thing that helps them, that’s called ‘rest.’ I have to provide them with a lot of rest and creature comforts,” Buser said.

Worst of all, he’d had a terrible scare with his hands. Toward the end of his 24-hour rest in Ophir his fingers stopped responding. Buser didn’t understand how he could have frozen all eight of them so badly, and then they began changing color, turning white and swelling.

“I was so scared I actually called my wife,” said Buser, who hardly ever talks to her during the Iditarod. “So she knows when I call there’s something pretty serious going on.”

Working at her computer, she gave him a field diagnosis of Raynaud’s disease, which affects circulation in fingers. It was a new experience for Buser, and left him hesitant to risk getting his hands seriously cold again if he camped out along the trail, which led him to take longer runs to checkpoints than his dogs were up for.

“What I’m inheriting now is my fear of being stuck out there with no functioning hands. And now my dogs are telling me, of course, ‘You know, you really used up way too much of our energy.’”

Compared to all that, he chuckled, scraping away ice and excrement was a benign issue.

“That’s par for the course,” he laughed. “If that’s the biggest worry I have, I’m doing pretty good.”