After a long battle with the Iditarod to regain his reputation, Dallas Seavey calls win No. 5 ‘icing on the cake’ 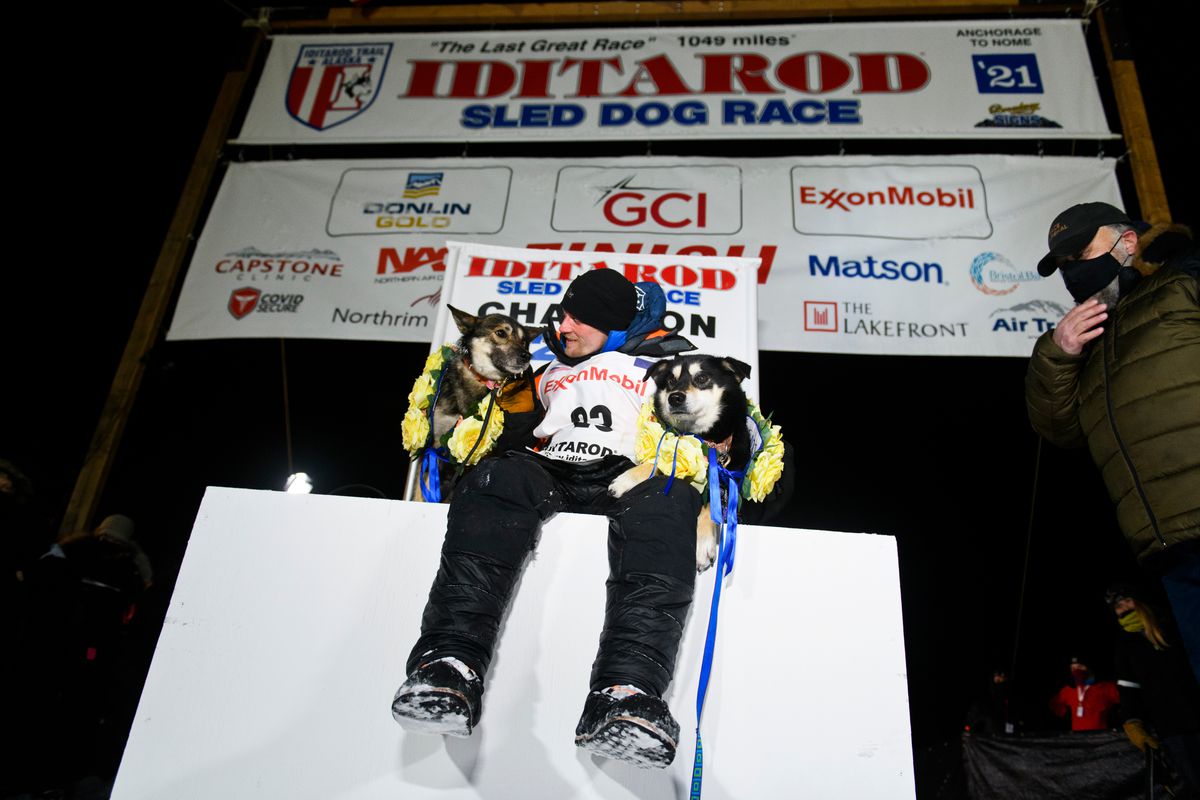 DESHKA LANDING — The 2021 Iditarod Trail Sled Dog Race marked Dallas Seavey’s return to the race he dominated the previous decade, and he came into it wanting to make a statement. He did exactly that with the laser-focus approach that made him a four-time champion before he turned 30. He ran a methodical race that left everyone chasing him and now, at age 34, he’s a five-time champion.

Shortly after crossing the Deshka Landing finish line Monday morning to match Rick Swenson as the Iditarod’s winningest musher, Seavey made another statement, a sharp and carefully worded explanation for why he left the race for three years and why he’s back now.

Seavey came close to winning No. 5 in 2017, when he finished second by about three hours to his dad, three-time champion Mitch Seavey. Then all hell broke loose.

Months after the race, Iditarod officials announced that dogs from Seavey’s team had tested positive for a banned substance. For more than a year, Seavey battled race officials, who ultimately cleared him in December 2018.

He called Monday’s victory “verification” for anyone who doubted his skills as a dog driver or who thinks he earned his spot in the record book by cheating.

“We got accused of all sorts of crap and there was no foundation or basis to any of it, and we fought like hell to get that cleared, and it was not an easy fight,” Seavey said. “We got fought back on at every turn. And the end result is the Iditarod we have today is not the same Iditarod it was in 2017. The organization is not the same organization, and that’s partially why I’m back now.

“I wasn’t gonna race for that group. I made that pretty clear.”

Since the scandal, the Iditarod overhauled its board of directors, keeping some and replacing others; among those who chose not to seek another term was Swenson. In the summer of 2019, former USA Triathlon chief Rob Urbach became CEO, replacing longtime executive director Stan Hooley.

The Iditarod is something he can endorse and support again, Seavey said. But the sting of missing three races while at the peak of his career remains.

“We’re good at this sport,” he said. “This is what I grew up doing, and that’s what really kind of pissed me off, quite frankly, is I spent the best years of my life pouring more than I thought was possible into something and I won the Iditarod four times and they tried to underhandedly basically say, ‘Oh, you were cheating the whole time. And you couldn’t do that on your own.’

“Now you’ve crossed a line, and that kinda led to the whole tussle. Since then they’ve made all the appropriate apologies, we’re cleared of any suspicion of wrongdoing, and I think the icing on the cake is we came back and we did it again.

Seavey is a natural athlete who was a champion wrestler in high school and has the lean, wiry build of a guy who could still wrestle in the lower weight classes. He helps his team by kicking while on his sled runners or by running alongside his sled.

He approaches mushing with the discipline of an elite athlete. “Whatever you’re doing, give it your whole attention,” he said at the finish line.

Seavey operates a kennel in Talkeetna, runs a sled-dog tourism business in the summer and does work as a public speaker. Whatever happens with his racing career, he said, he’ll still be a dog musher.

“... I always promised myself that I’ll keep doing this as long as it’s what I want to do more than anything else. ... If your passion’s not in it, you’re not gonna dominate it. As soon as I get to that point I’m gonna take a year off or retire. But I’m not going to ask the dogs to do something I’m not that into.

“I’m not making any statement now, I’m saying I’m open. I’m not committed. I may be back next year, I may not.”

Everything about Seavey says he will bring passion and focus to anything he pursues, something he’ll get a chance to do in the coming months as he prepares for Alaska’s biggest sporting event after the Iditarod. Seavey is signed up for July’s Mount Marathon race.