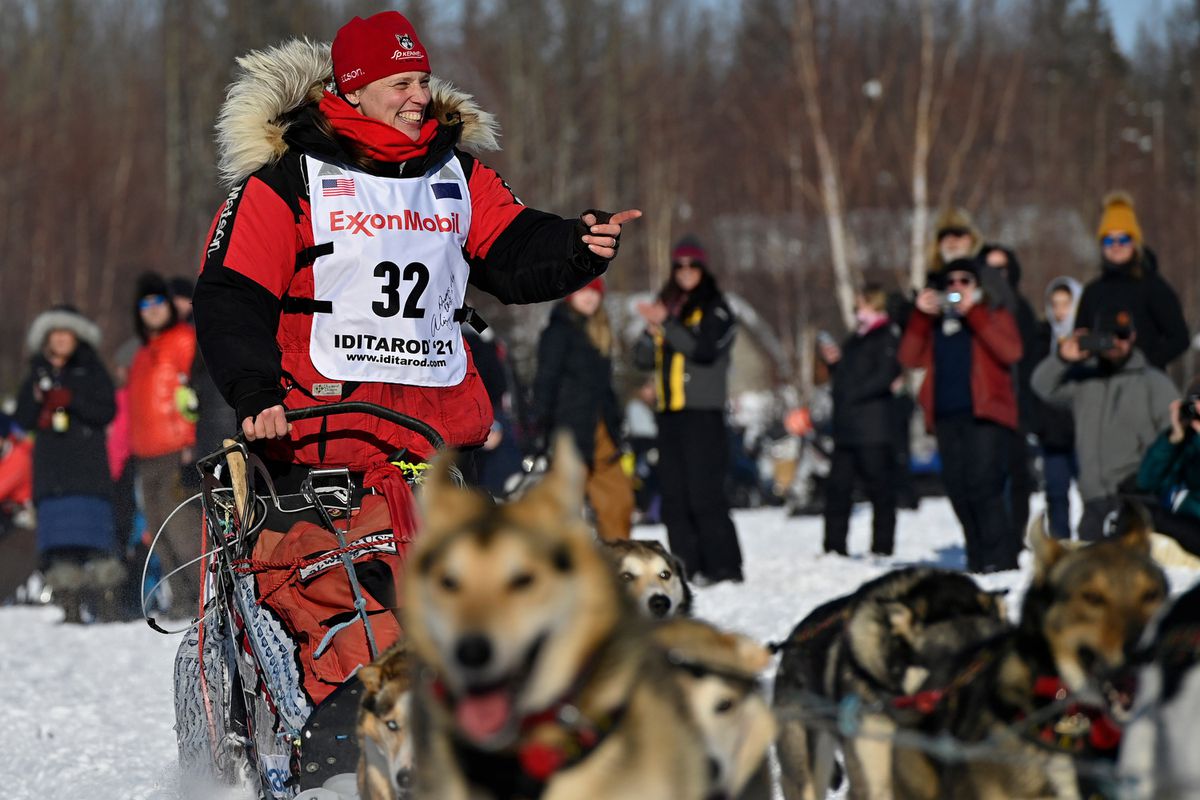 Sheets hang over the windows to block out light at the Two Rivers home where Aliy Zirkle and Allen Moore live. Moore speaks to his wife in whispers, and Zirkle doesn’t go outside or online.

Since crashing her sled and her skull on the ice last week in the Iditarod Trail Sled Dog Race, Zirkle has avoided light and sound because of a head injury.

Tuesday was the first day she hasn’t vomited, Moore said early in the afternoon, and she still can’t lift an arm that was dislocated when she hit the ice and was dragged by her team for an unknown distance across glare ice on the Tatina River.

Moore and Zirkle operate SP Kennel in Two Rivers and are the veterans of multiple 1,000-mile sled dog races. Before this year’s Iditarod, Zirkle, 50, announced she and Moore were retiring from racing and this would be her final race.

“It is for sure not gonna change those plans,” Moore said.

[Zirkle, Moore reflect on their mushing careers and why they’re retiring]

Moore said Zirkle blacked out after the crash that happened a few miles outside the Rohn checkpoint on the second day of the race, which started Sunday, March 7, at Deshka Landing. Rohn is about 160 miles into the 832-mile race.

Once Zirkle regained consciousness, she performed tasks that seem superhuman in retrospect — she sorted out her dogs after their lines got tangled, and then she led them to the checkpoint.

“Her arm is dislocated and she still has 4 or 5 miles to get back to the checkpoint, so she had to do that one-armed, get them untangled on the ice,” Moore said. “I don’t know how she did that. She doesn’t know either.”

Zirkle scratched from the race that night at 8:05 p.m., and about four hours later an HH-60G Pave Hawk helicopter from the Alaska Air National Guard’s 210th Rescue Squadron flew her to Providence Alaska Medical Center. A three-time runner-up with seven top-10 finishes, Zirkle had completed 20 Iditarods before this year.

Moore was back home in Two Rivers when race officials in Rohn reached him by satellite phone last Monday. They told him Zirkle would be flown out the next day with a broken arm.

When it became clear Zirkle also had a head injury, race marshal Mark Nordman — in McGrath at the time — called for an immediate helicopter rescue. Moore got in his truck and drove to Anchorage.

“She don’t remember anything in the (emergency room),” he said. “A black hole there, and right after she hit her head, she blacked out of course and then got drug while she was blacked out.

“I’m sure she got caught on something or whatever on the river there going to Rohn. ... It’s really slick glare ice there and the wind was blowing fairly hard, so it made her sled turn sideways, a 90-degree angle from the way she wanted to go. When it does that, any rock or stab or anything that you hit, you’re going over.”

Zirkle was released from the hospital on Tuesday morning of last week. She and Moore slept for a few hours in an Anchorage hotel room before the 380-mile trip back to Two Rivers, with Moore at the wheel and Zirkle in the back seat, sleeping.

In a note posted on the SP Kennel website Monday, Zirkle made her first public remarks since the crash.

“My sled flipped and I remember a very hard impact to my head, seeing black and then severe pain on my right arm and shoulder,” she wrote. “All I remember thinking was I had to get to Rohn. I couldn’t use my arm and I began vomiting.

“I arrived at the Checkpoint and the Iditarod volunteers were a godsend. They took over the care of my dogs and me. That time is a bit hazy in my mind but I think I curled up on a bunk.”

She remembers a dog being inside the cabin with her and conversations about medications, treatments and medevacs.

“At some point, they told me a helicopter was coming to get me and then I thought maybe there hadn’t been a dog. But I think there was,” she wrote.

Moore said officials and volunteers at the Rohn checkpoint took care of Zirkle’s dogs until they could be flown to Anchorage. SP Kennel handlers picked up the dogs in Anchorage and drove them to Two Rivers, where they are in fine shape, Moore said.

In her post, Zirkle said Moore read Iditarod updates to her because it is too painful to deal with lit-up computer screens or cellphones. (”That’s a lie,” she added parenthetically. “I couldn’t help but watch the live feed of Dallas and Aaron in Skwentna” the night before Dallas Seavey and Aaron Burmeister finished first and second in the race.)

“But on the plus side, I can walk and talk and I started eating better yesterday,” she wrote. “I’d say I’m on the mend. I haven’t been outside yet. Hopefully soon.”